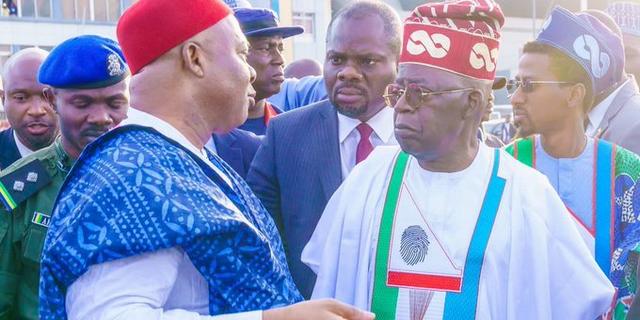 Governor  Hope Uzodimma of Imo State had said that the presidential candidate of the All Progressives Congress, Bola Ahmed Tinubu, is not just a good product the Igbo will benefit from, but one who will end Ndigbo’s lamentations if elected president next year.

Governor Uzodimma who is the South East Coordinator of the APC Presidential Campaign Council, spoke at Abakiliki, the Ebonyi State capital during the presidential campaign rally that took place on Thursday.

“There will be no more lamentation for the South East if by the grace of God Asiwaju becomes president next year,” Governor Uzodimma noted, adding that, “Asiwaju Bola Ahmed Tinubu is a very good product that Ndigbo will benefit from.”

The Governor said that Tinubu as the APC candidate will rely on his already established and known achievements to win the people’s trust just as it is a known fact that,”his running mate, Senator Kashim Shettima, a well-tested professional.”

Governor Uzodimma added on the APC standard bearer that, “Asiwaju Bola Ahmed Tinubu is one of our best and brightest in Nigeria and we believe in him.”

He therefore urged the South East to transform the huge turn out of party faithful at the Ebonyi rally into votes for better Tinubu and Shettima, insisting that their place in the decision – making body is already assured because victory is also assured in the five states of the South East for the APC.

According a well deserved honour to Governor Uzodimma in his speech, Tinubu  declared that the Governor represents the change, the hope and the Joy of not only Imo but Nigeria as a whole.

Among other promises, Tinubu who told the mammoth enthusiastic crowd that he is their best bet for the office of the president assured the audience that the South East will not be sidelined in his Government when elected president.