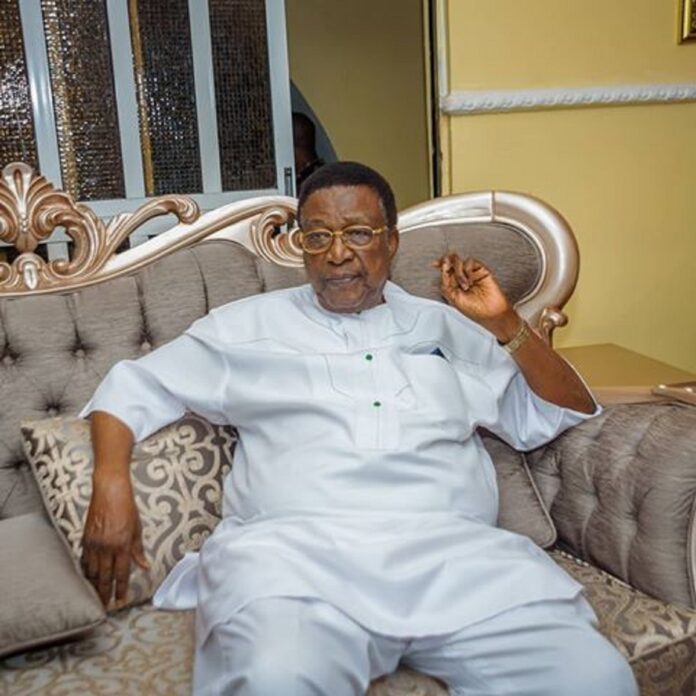 As the land tussle between Amechi Awkunanaw Community and Sen. Jim Nwobodo continues to rage, his kinsmen have urged him to swear on the land and take full possession.

The land which was reportedly given to the former governor to build his Satellite Newspapers has become an issue since Jim allegedly started selling portions of the land.

A Community leader Onuchukwu Ikechukwu Fabian said that the land remains community property since the purposes for which it was given has long gone moribond.

“The problem is just a land dispute between Amaechi people and Senator Jim Nwobodo.

“The land we donated to Jupiter Press in1981 to build a newspaper publishing company.

“After a while the company became moribond. The people of Amechi Awkunanaw called Nwobodo to know what to do with the land but he kept avoiding a meeting with the people.

“The next thing he started selling portions of the land and we went to him to ask why.

“We were discussing with him before Akegbeugwu people dragged him to court.

“We decided we would join ourselves in the suit to defend our land because the land belongs to Amechi people.

“Jim refused that the community should be joined as a party in the suit but should rather come in as witness.

“The community insisted on being joined as a party as owners of the land and that is the beginning of the problem.

“He tried to pressurize the traditional ruler HRH Igwe Ogbodo Okorie to sign some documents to permit him go to court with Akegbeugwu people but we said no, that the land belongs to Amechi Community.

“There is no other problem in Amechi Awkunanaw Community.

“We did our Town Union electiion but a few individuals from the community said that Jim Nwobodo asked them to do a parallel electiio. That he can talk to the Governor to give them certificates to sideline the other people.

“He also threatened that if they continue he will go ahead and suspend the traditional ruler.

“He went and brought one Ogbengene and told him that he would make him the traditional ruler so that he can sign the documents.

“The community had gone to court sometimes in 1991/92 to reclaim the land but he pleaded we settle out of Court.

“But he has refused to come sit and discuss with our people. This forced our people to return to court.”

On claims that the land was a gift, Onuchukwu challenged the former Governor to produce such evidence. Why is he afraid of going to Court? Why is he looking for out-of-court settlement?

“We have also told him to come to the land and swear, if he is sure of what he is saying.”

“We know his games and we will not allow him this time; once beaten, twice shy.”

Onuchukwu said the recent disagreement started when Jim started selling the land. “We tried to call him to order.”

“They are not telling the governor the yrith; that’s why we are urging him to bring both parties face to face. To sit with him and tell him what is happening.

“There is no crisis in Amechi, they should leave our land for us.”