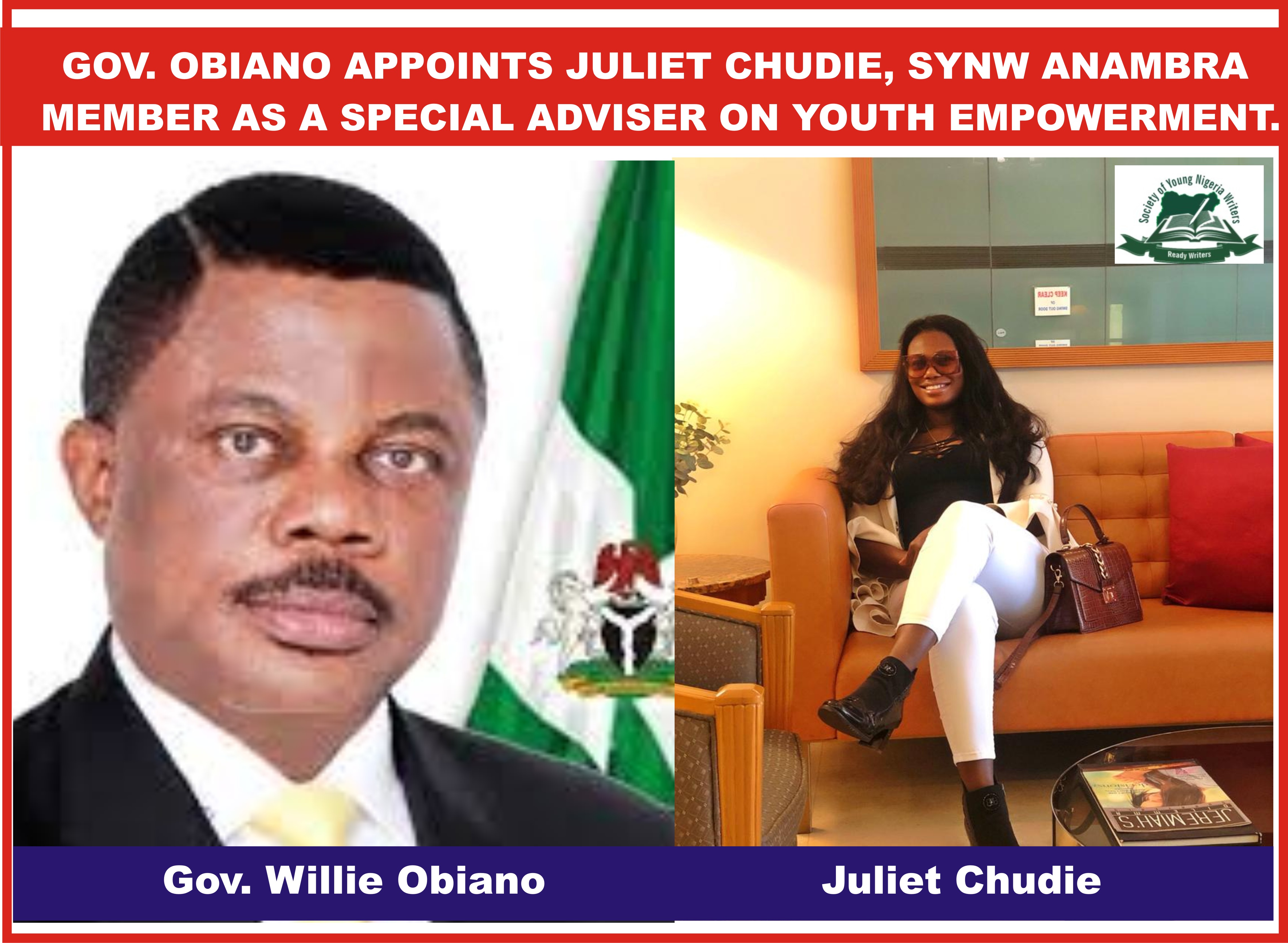 It was indeed a moment of jubilation for young writers in Anambra State as the Executive Governor of the state, His Excellency Chief Dr. Willie Obiano dosed out Appointment Letter to one of their own, Mrs. Juliet Chudie as a Special Adviser on Youth Empowerment.

The signing and issuing of the appointment letter which took place on Monday at the Government House, Awka, the state’s capital was witnessed by some top government functionaries.

Reacting to the good news, Mrs. Chudie described the appointment as a call to serve, and appreciated Gov. Obiano for finding her worthy to hold such a revered position, and giving her the opportunity to serve the state and Ndi Anambra.

She promised to employ her wealth of experience and knowledge in the discharge of her duties, so as to contribute her own quota in actualizing Gov. Obiano’s transformation agenda for the state, especially through the aspects of youth empowerment and development.

Mrs. Chudie who is a member of Society of Young Nigerian Writers (Anambra State Chapter) is a native of Agulu in Anaocha Local Government Area of Anambra State, and the founder of Juliet Chudie Foundation, founded in 2015.

She is the author of ‘A Mother’s Heart Bleeds’ and the winner of the CSA Award as the Creative Writer of the Year 2018, and has through her foundation, touched many lives, empowered many youths and restored many hope in various localities of the state.

In his own reaction, the National President of the Society of Young Nigerian Writers, Mr. Wole Adedoyin described the appointment as recognition of hardwork, and eulogized Gov. Willie Obiano for giving youths opportunities and voices in his administration.

Disclosing that there are many young ones out there who have a lot to contribute in development and governance of every state, Mr. Adedoyin also called on other governors of the various states in the federation to emulate such gesture and give youths more opportunity, maintaining that such will also help to spur other youths to play their drums well in their various fields of endeavour.

He further urged Governor Obiano to also consolidate on this feat by appointing another young writer, suggestively the Coordinator of the Society of Young Nigerian Writers in the state, Mr. Izunna Okafor as an aide on Literary Matters, being an internationally acclaimed award-winning author/journalist and convener of the Chinua Achebe Annual Literary Festival.

According to him, “Anambra State is a hub of literary figures in Nigeria, and in fact, the first state to reckon with when it comes to literary matters, having given the world arrays of literary champions; and as such, the state deserves to have an aide who will stand as a liaison officer between the government and writers in the state (both established and burgeoning writers)”.

“In fact, Anambra State is expected to be the first state to set the pace on having such an aide on Literary Matters, which no state government has ever had in the history of the country; and I trust Gov. Obiano is best expected to set such pace, being a youth-loving Governor. So, as I appreciate him, I also urge him to buy into this humble suggestion.” Mr. Adedoyin ended.