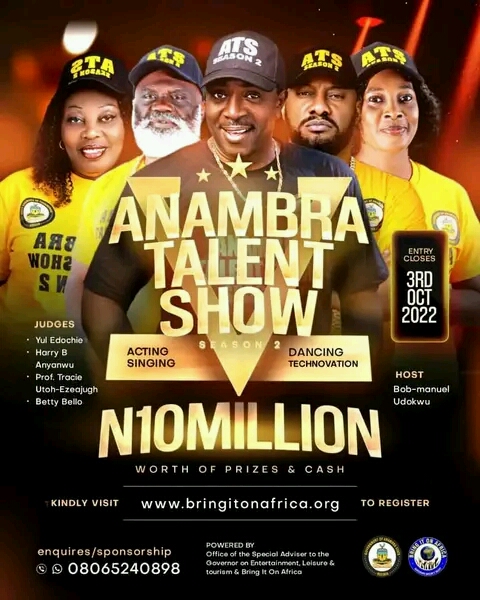 All is now set for the season 2 of the in-house television reality show, Anambra Talent Show, as organizers announced superstars and personalities who will feature and play active roles at the event.

The event, organized by a non-governmental organization, Bring It On Africa, in collaboration with the Office of Special Adviser to Governor on Entertainment, Leisure and Tourism, Anambra State, will feature airtight competitions on four categories of Technovation, Acting, Singing and Dancing.

Speaking on the essence of the Show, the Planning Committee Chairman and veteran Nollywood actor and director, Dr. Bob-Manuel Udokwu said one of the visions of the event is to partner with the government to discover and empower individuals who are exceptionally talented, even after the Show.

According to him, the Show is unique its own way, in the sense that four overall winners will emerge from all the four categories respectively (one overall winner from each category). He further revealed that the participants will also be exposed to major companies that have needs for their talents as well as many opportunities that abound in their respective fields.

“Those who perform extremely well in Acting category will be exposed to major movie companies here in Anambra State and in Nigeria at large; and those who do well in the Singing category will be encouraged to get into music professionally through the owners of music labels.

“For Dancing, it also goes in the same line, as well as Technovation, because technology is thriving most of the activities of the people and organisations these days. In other words, this platform is what we want to use to expose talents in these areas all over Nigeria, all over the world,” said Dr. Udokwu, who doubles as the Host of the Show.

While calling on talented individuals to apply for the show at www.bringitonafrica.org, before the (October 3) deadline; Sir Udokwu, who is also the Special Adviser to the Governor on Entertainment, Leisure and Tourism, also revealed that ten million naira (₦10m) worth of prizes will be won at the event, in addition to many other consolation prizes to be won.

“Both group and individual presentations are acceptable,” he added.

On his own part, the President and Founder, Bring It On Africa, Mr. Chigbo Nweke described the event as a talent discovery and exhibition show where participants compete for the limelight and the ultimate prize while also showcasing their talents to the world. He also revealed that participation in the event is open to talented individuals from Anambra and other parts of the country.

Mr. Nweke, who noted that the event will also be an avenue to pronounce and project Anambra to the world, said for the first time, during this year’s edition of the event, which will hold in Awka, Anambra State capital; the contestants will be camped in-house, fed and taken care of, from November 13 to December 11, which is the last day of the Show. He said the camp will open on Fridays, close on Mondays and reopen on Fridays; adding that the aim of the in-house is to enable the contestants prepare and rehearse well before their live show, which will hold every Sunday till the last day.

He further revealed that prior to the audition, the event will also feature mentorship and lecture series where all the applicants will be lectured on entrepreneurship, youth development and other such areas by some great personalities and superstars from different parts of the country.

“The lecture series is going to be a very interesting, powerful and impactful one, such that even those who do not eventually win in the competition would have learnt a lot of things that will help them excel in life and in their respective fields and talents. They will also be issued with certificates at the end of the lecture series,” he said.

He also disclosed that some movie scripts are already on ground, which both those who win and others who do well in the Acting category will shoot after the Show; while those in the Technovation category will be taken (on excursion) to some of the automobile and technological companies in Anambra state, including the Innoson Vehicle Manufacturing company, Nnewi, and others, after the Show.

For those in the Singing and Dancing categories, Mr. Nweke said arrangements have also been made to expose them to many opportunities both during and after Show, as many guests and conpsjjedy have been invited, both to grace the event and to scout for amazing talents.

It was gathered that some other superstars and great personalities will feature and play active roles in the event.