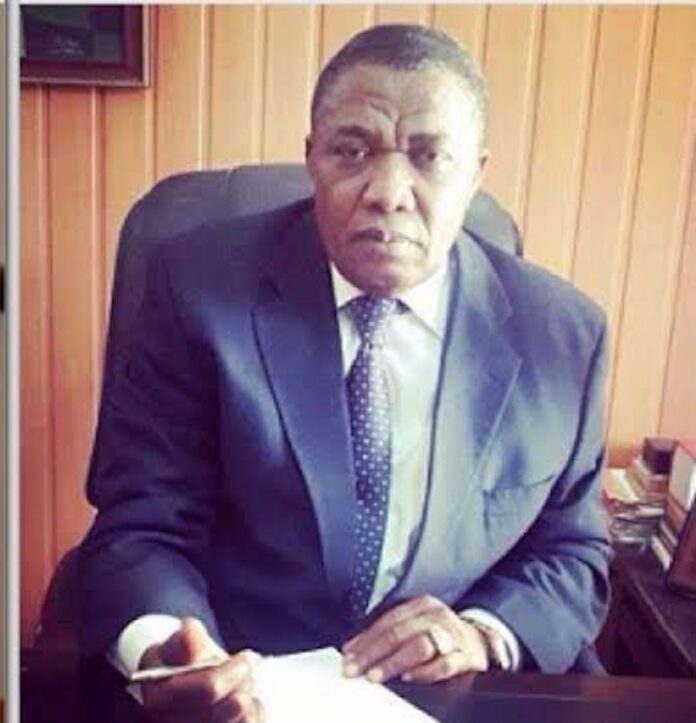 Prince Orji Nwafor – Orizu, an Indigene of Anambra state, a constitutional lawyer and the son of the first senate president in Nigeria. In this interview with Ekuson Nw’Ogbunka in his office in Abuja yesterday, the principal partner of Orji Nwafor – Orizu & Co says that the recent governorship election in his state reflected the will of the people.
Excerpts.

Qtn: As a constitutional lawyer and an engine of Anambra, how do you see the outcome of the recently conducted governorship election in your state?

Ans: The outcome of Anambra election makes me proud of being an Anambra person. It has shown, as the young men put it, that Anambra is not Imo, as Edo is not Lagos. Anambra people have shown the whole world that against their fear fr violence, the state can have election without violence. It has shown the people that we are peaceful.

That gives credence to what our governor, Willie Obiano was saying when we were accusing him of not attending South East Governors Meeting. His reply was that he was not going to attend the meeting to discuss security of the state, because those who have been sponsoring insurgents in his state are inside that meeting. We then say, the so called unknown gun men, are they not people from outside Anambra state? This is a question that remains unanswered and Anambra people must check it.

So I ask Anambra people to go and stay in their peaceful domain and they have shown that the All Progressive Grand Alliance (APGA) is a movement, not a political party. This is a movement that is intended to take care of their own people and move further. APGA has a representative in the federal house from Niger and Nasarawa states and it even won in Gwagwalada area council of Abuja. What the APGA should do is to ensure that some more states agree with their party.

Qtn: Do you mean the states from the south east or elsewhere.

Ans: From other geopolitical zones. The Nigerian People’s Party (NPP) won in Plateau state. Anambra state has always been lucky in getting their governors. Their governors are not regular politicians. Peter Obi came in as a top business man, Obiano came in as an executive from the bank. We are happy that we are going to have a viable governent and governor. I am too satisfied that Soludo will lead us well. Let us thank God that the will of the people came to pass.

Qtn What will be your message to the candidates from different political parties who lost the election?

Ans: Message for the contestants is there for them. The voting was overwhelming. It showed the thinking of Anambra people, that is what democracy is; majority carries the vote. When you have a landslide victory; I was even expecting them to have conceded. I thought that they would have conceded to Soludo, before the Ihiala supplementary election. They ought to have conceded and that was a mistake from them.

Now that they didn’t concede and Soludo has won the election, my advice to them is to join Soludo and plan how to develop the state and wait for the next election. But for now, there is no need for election petition. What election petition are you going to have. This is a man who got 19 local governments in the state.

Qtn: Don’t you think that it would have been better, if they had voted for the All Progressives Congress (APC), being the ruling party at the centre, due to its advantages.

Ans: The people of Anambra state are not playing regional politics. They are doing original work. They don’t want orders from Lagos or from Abuja. They don’t want to be told who will rule them. Instead of them to join other people, other people should join them; joining the APC to Anambra state … I am not in Anambra. But the people of the state has rejected the APC, years back. That in some places they get one vote and in some others they get zero vote shows that the people do not want the APC.

So they don’t want to go to that centre, because you are talking about centre for the state government. You give them allocation and give them what is due for them. But I am saying that it is better for the leaders of the APGA to do more to go more national.

Qtn: Soludo was once the governor of Central Bank of Nigeria. What would be your advice to him?

Ans: Soludo must look at the state without rancour of who rigged election and who contested, he doesn’t have enemies in Anambra, rather he has adversaries. Let him maintain the culture of seeing those who contested with him as brothers who have the right to do so.

Then for Anambra state, Anambra state is an ongoing concern in Nigeria. He should look at the roads his predecessors constructed; some of them have gone bad. He should also complete those they started and didn’t complete. Let him take the issue of education in the state very serious, because it looks like the people from the state are coming down in the issue of education. Let him not allow religious politics into his government. Serve the people. Be humble in victory. Let him ensure that he conducts local government election, for his government to be credible.

Qtn: Political godfatherizm has become the other of the day and it has never done good to any state. There is this fear that such will exist between him and Obiano, can you speak on that area?

Ans: Obiano is not his political godfather. Soludo has been contesting governorship election, even before Obiano. Obiano was the leader of the party and Obiano has won election throu the party. So they should work in synergy, for the interest of the people of Anambra state

I don’t see Governor Obiano formenting trouble for Soludo, because he is not the domineering type of person, he is not.
How can Obiano dominate his government. He won’t. A former leader of the party, that he consults Obiano, doesn’t mean that Obiano is controling or dominating him. Obiano being the immediate party leader and governor of Anambra state, it will be useful for him to go to Obiano for one thing or the other, in his government. That is my view.

Qtn: What lesson can other states learn from Anambra election?

Ans: Very simple. That it is good to allow the will of the people happen. I must thank President Muhammad Buhari.

Qtn: Why?
I must say it. Anyone who wants to hear, let him hear. Those who want to agree, let them agree. You can accuse Buhari of anything, but he doesn’t interfere in an election. That is what it showed there. He didn’t interfere in Anambra state election. The interference was when the security agents stopped some people who were trying to come to disrupt the election. I thank him for that and it showed maturity. I also thank members of IPOB for allowing peace to reign. That shows maturity too. I give special thanks to INEC for wonderful work, because they were dedicated and transparent. They were resilient and did their job without fear or favour.