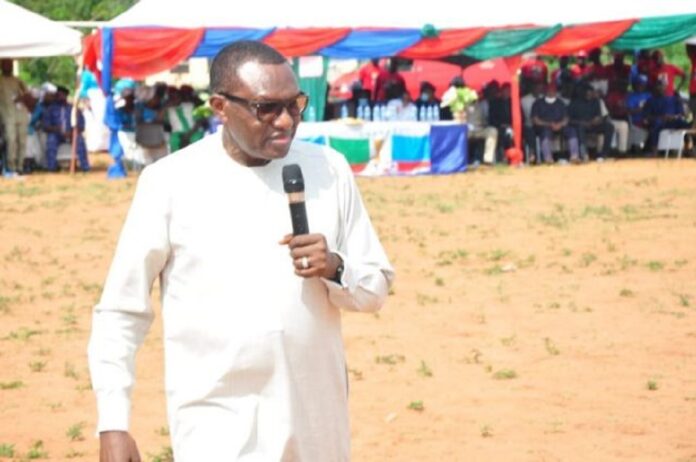 A Federal High Court in Abuja has been urged to include the Caretaker Chairman of the All Progressives Congress (APC) Governor Mai Mala Buni as a defendant in a suit challenging the emergence of Andy Uba as the party’s candidate in the November 6 governorship election in Anambra State.

The request is contained in a fresh motion filed by the plaintiff, George Moghalu, who is claiming in the suit, marked: FHC/ABJ/CS/648/2021 the APC did not comply with the relevant provisions of the Electoral Act 2010 and the party’s regulations and guidelines in the conduct of its governorship primary in Anambra state.

Already listed as defendants in the suit are the APC, the Independent National Electoral Commission (INEC) and Uba.

At the last mention of the case on July 29, plaintiff’s lawyer, Chris Uche (SAN), explained the new motion for leave to include Buni as a party in the suit was informed by the realisation of the plaintiff’s legal team that the APC’s Caretaker Chairman was a necessary party.

Lawyers to the defendants, including Mahmud Magaji (SAN), said they were within time to respond to the suit, more so when the new motion was served on them in court.

They sought time to file their responses.

Justice Ahmed Mohammed then adjourned till Aug. 10 for hearing.

In the substantive suit, Moghalu wants the court to among others, determine whether a political party that fails to comply with the provisions of the Electoral Act (2010) the party’s constitution and its guidelines, by purporting to conduct a primary election without accreditation of voters, actual voting or casting of votes, collation of votes and announcement of results based on actual votes cast and counted, can validly field a candidate for the election.

He wants the court to declare that, by virtue of the APC’s alleged non-compliance with the provisions of the Electoral Act 2010 and the party’s regulations and guidelines in the conduct of its primary in Anambra state, Uba “is not a candidate at the said 6th November 2021 gubernatorial election or at any subsequent postponement.”

The plaintiff equally wants the court to declare that the APC was bound to comply with all the relevant legal provisions in the conduct of its primary election after having demanded and received N22.5million from him and other 13 aspirants.

He is praying the court to among others, declare that having allegedly failed to comply with the relevant applicable laws, the APC has no candidate for the forthcoming governorship election; and to order the party to refund the N22.5million he paid for the expression of interest and nomination forms.

Moghalu also wants the court to grant a perpetual injunction to restrain Uba from holding himself out or parading himself as the candidate of the APC in the said election; and an order of mandatory injunction compelling INEC to delist the APC and Uba from the list of political parties and candidates for the election.