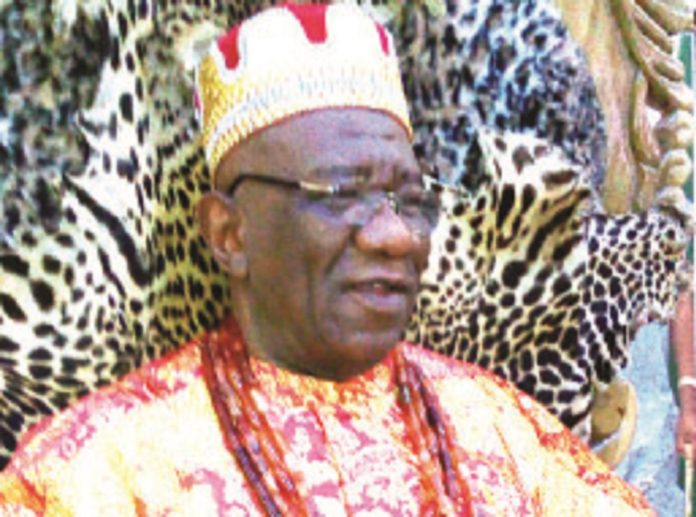 The untimely death of a youth leader- Chike Okoye who died  in a bid to evade police arrest at the eve of the Nwafor Ogidi annual cultural Festival turned the tone of this year’s celebration to sadness as the family, Uruezealor village of the deceased, Ogidi Town Union and Igwe Alex Onyido of Ogidi community in Idemili North and his cabinet members were thrown into a mourning mood.

It would be recalled that when the news of the death of the youth leader filtered into the ears of the people of Uruezealor village that one of their sons has died in a bid to evade police arrest and that scores had already been arrested by the police, the people ran amok, made straight to the Iyi-Enu Mission hospital morgue at Ogidi, brought the corpse and deposited it at the palace of the monarch and before dispersing.

However, the leadership of Ogidi Union Nigeria, OUN led by its President-General, High Chief Chuka Onubogu, the Igwe-in-Council and other stakeholders paid a condolence visit to the bereaved family shortly after the controversy had died down.

The PG, Onubogu expressed their sincere condolence to the family on behalf of Igwe Onyido, the Igwe-in-council and the entire people of Ogidi promising that the town union and Igwe-in-council would play active role during the funeral ceremony to buttress their point that they were not happy with the death of the young man.

The town union boss maintained that the entire Ogidi people had taken everything that transpired behind and were now towing the part peace process.

Reacting to the development, Igwe Onyido expressed sadness that the death of the young man has turned his happy Nwafor Ogidi annual cultural and masquerade festivals into a sad mood, pleading with the bereaved family to accept his condolences as he did not mean any harm to any of his subjects, since he is the father of everybody, both the stubborn and the gentle ones.

Igwe Onyido recalled that Benedict Obide was earlier arrested by the police for malicious damage, “I constructed a concrete slab to make a certain road passable and the kindred who owned the land, out of mere suspicion that I (Igwe) wanted to take their land away from them, decided to take laws into their hands by demolishing the concrete slab, which necessitated the arrest of Obide and which attracted the protests.

“When the youths demanded for the release of the detained leader, Obide, I obliged them by calling on the CP and DPO to release him but because the DPO said he would release him the next morning, the youths went berserk and took their protest down to the police station, which necessitated the hunting of their leaders and unfortunate death of Chike.

The late Chike, I learnt, was an asthmatic, diabetic and High Blood Pressure patient and that was why when he jumped out of the One-storey building, he started breathing fastly until he was rushed to the hospital where the doctors battled to revive him to no avail until he passed on”, said the monarch.

The wife of the deceased, Mrs. Ebele Okoye a young mother of two, Kingsley and Stanley Okoye brothers of the deceased has made a passionate appeal to the State government to come to their assistance in terms of human and material resources and to ensure that justice prevails in this circumstance.

“Governor Willie Obiano, please come to my rescue or I will die. They have pursued my husband to an early grave. I have two little kids”, said Ebele Okoye.

The duo of Kingsley and Stanley in their respective speeches lamented that their brother could not have died if the police did not come to arrest him saying that Chike’s only crime was that he was outspoken.” if the death was an accident why not the police rush him to hospital since you came for an official arrest why abandon Chike to die in the pool of his own blood”.

Kingsley refuted the claim making rounds that his late brother was asthmatic, diabetic and had High blood pressure saying that no terminal disease runs in their family.

Addressing newsmen, the Chairman of Uruezalor village who led the protesters, Mr Benedith Obide alleged that, “the cause of this death and several arrests was the community Ogbor land which the monarch allegedly built culverts upon and started encroachment without our consent but now other people arrested have been released after the incident”.