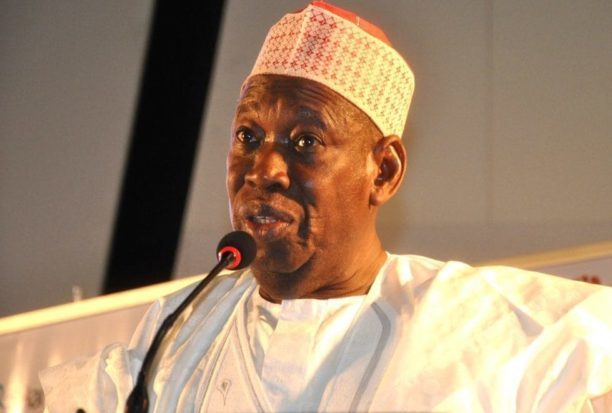 Barely twenty four hours after the traditional 100 days in office for governors who were inaugurated on 29th May, 2019, an African group of democrats under the auspices of African Democracy Assessment Network (ADAN), based in Dakar, Senegal, after assessing what was achieved by all the governors in the last 100 days of their stewardship, Kano state governor Dr Abdullahi Umar Ganduje, has been selected, to be awarded as the “Best Governor In 100 Days.”

Using different parameters, before reaching to the conclusion of their research on all the governors involved, as their empirical yardstick, ADAN made it clear that, they looked at the major sectors that are more likely to benefit majority populace, as against individual fruition above others.

In a letter sent to the governor, that was signed by the West African Regional Coordinator, Mr Samson Theodore, it intimates the governor about their procedures and how he was unanimously chosen by the panelists, before he reaches the first position.

The letter titled “Why Kano State Governor Dr Abdullahi Umar Ganduje Picks First Position In 100 Days In Office” says “Sequel to discussions that took place at Dakar, amongst our members after our Mid-Year Democracy Review Meeting, all members agreed to start rating Nigerian governors at some selected intervals.”

The 9- Page letter explains further that, “We carefully selected these areas, education, health agriculture, security, economy, infrastructural development and politics, with concentration on supremacy of political party or parties as the case may be.”

In the area of education the group commends that, Ganduje’s commitment in moving the sector to greater heights, started with his unrelenting efforts to fast track and facilitate the accreditation of some programmes offered by state owned tertiary institutions of higher learning.

“Your bringing to forth, of the government’s intent to establish College of Education, (Technical) for Women, is considered by our panel of research, as genuine policy pronouncement. This also goes a long way for effective and efficient self-reliance strategy for women. Girl child education in its highest position,” says the letter.

ADAN reminded that Ganduje was the governor who, first, if not the only one, who during the inauguration ceremony on 29th May, 2019, made clear pronouncement that both basic and secondary schools education would be free and compulsory. After categorising that, people with special needs, who were physically challenged would get free education from basic up to tertiary institution.

To further buttress the importance and relevance of the Summit at this material time, the group reveals that, the presence of many countries of the world at the Summit, it clearly indicates how dear the programme is to such nations, that across Europe Middle East and other African nations.

“Attendance of Ambassadors from some countries, tells us that the countries believe in the seriousness, commitment and political will of His Excellency, Governor Abdullahi Umar Ganduje towards achieving desired goals,” encourages the letter.

Ganduje’s commitment towards integrating Almajiri system of education, to be curriculum-based with the inclusion of English language and mathematics, was also highly commended by the group. Especially that, a committee of experts has swung into action already, with a view to finding better and feasible ways for proper and workable integration process,”…this is also commendable,” the group illuminates.

They believe that, “This strategy will definitely create more rooms for check mating street begging and over dependence of Almajiri child on hopelessness and carelessness from the parents or guardians of Almajiri child. But with this integration, that also allows for improving their life quality, many things will change for better.”

On the health front, after the group appreciates Ganduje’s government for laying the foundation stone of World Class Cancer Centre, it also shows greater appreciation to

“Governor Abdullahi Umar Ganduje’s rare commitment for the establishment of 400-bed health facilities in each headquarters of the newly 4 created Emirates in the state. We learned that a Technical Committee has already been raised and was furnished with the Terms of Reference towards that.”

Strengthening public private partnership in health sector gets closer look within the first 100 days of Ganduje in his second term in office, which ultimately promotes quality assurance in the delivery system, they commended.

This, according to the letter gets stronger endorsement from the governor, “…when the Kano Health Care Development Consortium visited him through the Deputy Governor, Dr Nasiru Yusuf Gawuna. It was Dr Ebenezer Abusomwan who led the delegation. Governor reiterated his commitment towards partnering with foreign investors in the health sector. This, is indeed another breakthrough.”

It was within the 100 days in office, of governor Ganduje that the state government rounds up the spending of  N350 Million, as hints by the letter sent to the governor, for the procurement of adequate working facilities for successful conduct of 2019 Maternal, Newborn and Child Health Week, at the take-off.

The letter further reveals and appreciates that, “The programme targets 3.5 million children and 90,000 mothers, from all public health facilities across the 44 local government areas.”

In the area of security, ADAN group acknowledges and appreciates Ganduje’s security architecture in the last 100 days in office, through consolidating technology-based security system in the state,

“…which is resulting into major fruitions, particularly which manifested in the arrest of those who kidnapped the Magajin Garin Daura and the alleged mastermind kingpin of many kidnappings and other criminal activities from Taraba state, Wadume, who allegedly caused the killing of three gallant police officers,” reads the letter.

Effective and efficient community policing, the letter opines “Is more pronounced in the last 100 days in office. Which also promotes successful security operations in the state. Another good thing is the harmonious synergy between all the security agencies in the state. Rivalry among such agencies is optimally reduced to the lowest ebb.”

After challenging members of the public, to go and make personal investigation over the number of arrest and prosecution of criminals in the state, in the last 100 days of Ganduje in office, they also appreciate the consolidation of peaceful atmosphere in the state, particularly when some other neighbouring states were faced with various degrees of security challenges.

For food security purposes farmers associations and clusters are strengthened and empowered to face their farms squarely and courageously, the letter noticed. It notes further that, “We are aware of many other interventions, the recent one is how the state government has already swung into action for the employment of 800 more extension workers.”

“We understand this when delegates from Sasakawa Africa Association, that was led by Mr Osaka Katsuhiro, the Senior Executive Director,  was at the Government House, paying courtesy call to the governor, who was also represented by his Deputy Dr Nasiru Yusif Gawuna at the occasion,” the letter reminded.

Even at the macro economic terms, the letter explains “…Foreign Direct Investment (FDI) paves way for wealth creation and creating room for sustainable economic survival. Governor Ganduje proves his mettle when he organised a special business session between the President of the Republic of Guinea, Prof. Alpha Conde and Kano business community. That took place at Government House, Kano, recently.”

The coming of these parties, the letter explains “Will go a long way in the opening of more economic benefits to the state, across the shores of Nigeria. And this is highly commendable. The fact that Ganduje seizes this great opportunity within his first 100 days in office, it shows his commitment towards making Kano greater.

His Excellency’s effort in bringing to the roundtable, business moguls like Aliko Dangote, Aminu Dantata, Abdussamad Ishaqa Rabi’u, Abdulmanaf of Azman Air and many more strong business people, is enough cause for commendation.”

Wooing other distinguished business moguls, like Prince Arthur Eze to come and invest in Kano was seen by this ADAN group as another wide window for Kano’s unmatched development in the areas of commerce and industry. Just recently visited by the governor, Prince Eze has promised to come to Kano and invest in Kano Economic City.

Governor Ganduje’s thinking in the establishment of additional 4 Emirates in the state, takes greater paragraphs in the letter, describing the development as people-centred and modernity compliance, which, according to them, “…is taking the state to greater heights of growth and development, in the areas of education, health, security, agriculture, environmental sanitation, provision of social amenities, among others.”

“This group of ours will not leave politics unattended. Kano state under Ganduje, within the first 100 days in office, was the state that gave open and sincere support to the ruling party’s, All Progressives Congress (APC), decision in the formation of leadership of the National Assembly. In both chambers of Senate and House of Representatives,” said the letter.

The letter continues that, at a point in time, even the Speaker of the House, Femi Gbajagbiamila said that times without number, as he was appreciating what Kano did to him, when he was aspiring for the position, the letter reminded. “All these and similar decisions taken by Kano in compliance with the interest and opinion of the party, were done within the first 100 days. And all in an effort to strengthen supremacy of the party,” ADAN appreciates.

In the area of infrastructural development, the group commends Ganduje for making sure that in his first 100 days in office during this second term, the major capital projects in the state are either completed or about to be completed.

They gave an example of “Dangi Interchange flyover, which reached advance stage and about to be completed. Secondly, the popular Modern Skills Acquisition Centre, which is completed only waiting for commissioning.”

In the conclusion part of the letter the group requests governor Ganduje to give them appointment so that they could show up and decorate him with the prestigious Award of Best Governor in Nigeria of 100 Days.