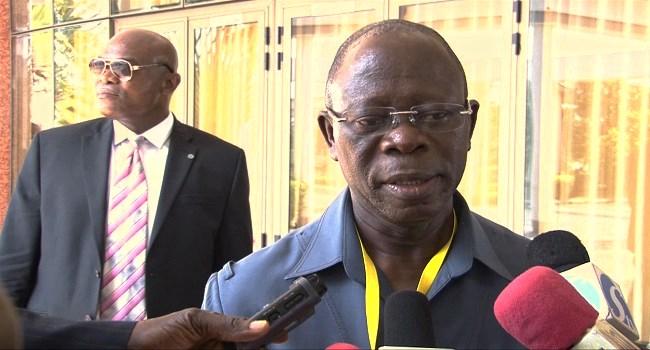 Barely one month after Governor Godwin Obaseki of Edo State and his successor, Comrade Adams Oshiomhole announced ceasefire, it appears that all is still not well between the godfather and his political son.

The indication emerged weekend, when Oshiomhole, in his recent interview at the weekend, said that he only nominated one commissioner in Obaseki’s Government, whom he said had been sacked by the Governor.

The National Chairman of the APC also said that it was disturbing to him that Obaseki has abandoned some of his ongoing projects.

Governor Obaseki has however vowed that he would not join issues with his successor.

Rather, he urged actors within his government not to utter a word over comments​ credited to Oshiomhole.

He said he has chosen to pursue the path of peace and reconciliation in dealing with the rift between him and his successor, in the interest of APC and the State.

The Governor made this known Monday evening, in a statement jointly signed by the State Commissioner for Information and Communication, Paul Ohunbamu, and his Special Adviser on Media Strategy, Crusoe Osagie.

The statement which was made available to journalists in Benin, noted that the State Government has received inquiries from various stakeholders, both within and outside the country, about its response to the onslaught against the Governor.

“The Edo State Government observed over the weekend very hostile statements credited to our revered National Chairman of APC across various media platforms.

“Following the development, the State Governor has instructed that no actors​ within the state government should make any comment whatsoever, or join issues on the ensuing hostile comments and discussions,” the statement said.

It would be recalled that Oshiomhole had when addressing journalists at his Iyamho country home on Sallah day, said there was no rift between him and Obaseki.

He blamed people who benefit from crisis for fueling the perceived face-off.