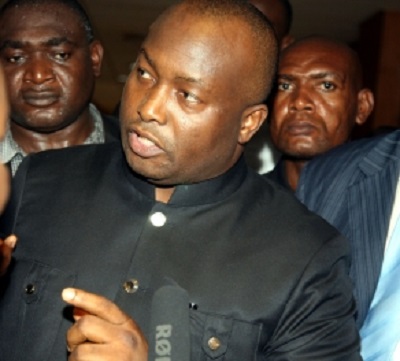 Members of the Anambra State Election petitions tribunal maybe
reshuffled in the most controversial circumstance following alleged
pressure from some petitioners on the office of the President of the
Appeal Court.
The plot to change the panelists may not have been unconnected with
the lingering motion filled by some petitioners from Anambra South
Senatorial District insisting that the cases be consolidated in a
petition filed by the duo of Chris Uba of the Peoples Democratic Party
(PDP) and his elder brother Sen. Andy Uba of the All Progressive
Congress (APC) challenging the victory of Sen. Ifeanyi Ubah of the
Young Progressives Party (YPP).
According to Anambra South Integrity Forum (ASIF) led by its
co-coordinator Mr. Maximus Okafor Ibeadi who spoke to reporters
shortly after the meeting of the group in Awka.
“We have confidence in the three tribunal panels in Anambra State and
what they have done so far is impressive because they act in
accordance with the point of law”.
“But some forces whose candidates did not will the senatorial election
are making underground moves for the panelists to be changed with new
members who would dance to their tune put in place”.
“There are some forces who have been benefiting from the locust of the
past eight years that have lost their deposits at the end of this
election and they are remotely contacting their co-travelers to
impress on the revered president of the Appeal Court to change the
judges”.
He further noted that “we know that His Lordship, the President of the
Appeal Court is not somebody that can be pushed around and he believes
in the rule of law and sacrosantity of the judicial process and urge
him not to allow those desperate politicians to have their ways”.
Ibeadi also contended that “These two petitioners I know were
compelled by their supporters to challenge the out come of the
election in court and going by the people I know very well they are
not given to overheating the polity by trying to change the goal post
in the middle of a football match”.
We use this medium to urge the petitioners not to give in to the
machinations of their desperate supporters who would not allow an all
inclusive representation to come in place but to benefit individually
from the collective interest of the people of Anambra South Senatorial
District.

Corroborating this plot also yesterday one of the legal aids to Sen.
Ifeanyi Ubah, Mr. Uche Ugokwe told reporters that the underground plot
to change the panel leaked two nights ago, adding that the tribunal
decision to deconsolidate the petitions without recourse to the
relevant parties in the matter.
“We were informed that at about 8:30pm last night that the matter
would not go on. In court we got information from the secretaries
staff that the matter was put-off following an application vide a
letter to the PCA for the de-consolidation off the matter on the
grounds that the consolidation would be affect the expeditions hearing
of the matter. This letter was not copied to us. Which is unethical
and in breach of fair hearing rules”.
“Following the above we made further enquires from counsel in the two
petitions and found out that the letter for the de-consolidation was
from the petitioner in EPT/09, (Andy Uba)”
“It is important to note that EPT/09 and EPT/11 were consolidated
pursuant to a court order and ruling on the motion on notice filed by
the petitioner in EPT/11”.
“This motion was supported by the petitioner in EPT/09 and other
respondents but was initially opposed by us. At the last hearing we
withdraw our counter affidavit and the court therefore granted the
application on the consent of all the parties and delivered a ruling
in which it made an order consolidating the two petitions for purposes
of hearing only given the above we believe that a judicial decision
more so a consent order cannot be reversed. Other than by a formal
application and not by the court of Appeal or exercise of it’s
administrative powers over the tribunal”.
“A judicial decision in law can only be set aside by another judicial
decision on a formal application before the court or on appeal.
The court of appeal therefore lacks jurisdiction to interfere with the
decision of the tribunal without a formal application on notice to the
parties”