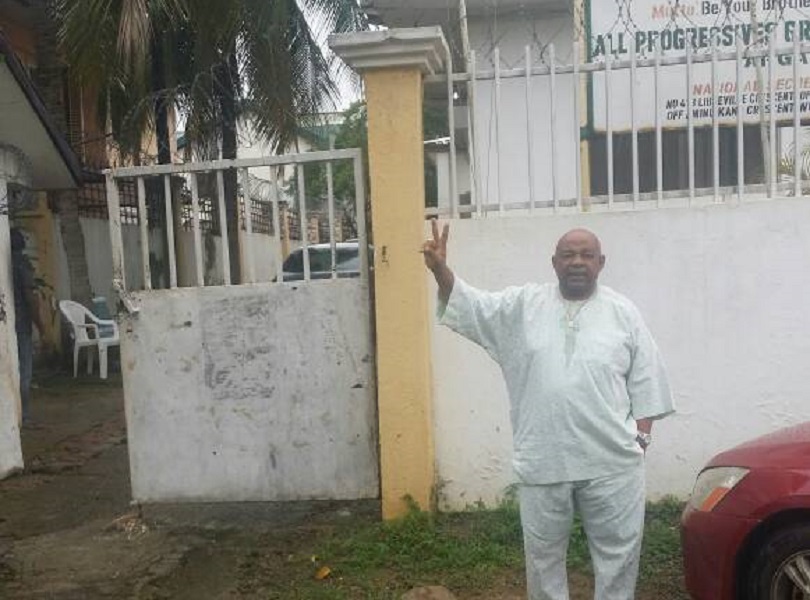 The morning of August 4, 2017 saw drama at the entrance gates of the national secretariat of the All Progressive Grand Alliance [APGA] in Abuja. This as a group led by Martin Agbaso were forcefully and embarrassingly ejected out of the premises of the National Secretariat. According to information made available to 247ureports.com, the group led by Agbaso had illegally gained entrance into the premises of the national secretariat claiming Agbaso was the rightful national chairman of the party.

Following the illegal ‘capture’ of the national secretariat by the Agbaso led group, the day before, the media airwaves became awash with photographs of Martin Agbaso and his group entering the premises and forcefully dislodging keys and breaking into rooms with locked doors. The photographs also showed that the group had police backing. There were police officers carrying weapons shown in the photographs.

The APGA executive group which was led by the National Secretary, Labaran Maku and Ben Obi [Igwe APGA] to Abuja also sort clarifications from the Independent National Electoral Commission [INEC]. It was made certain the duly recognized national chairman remains Victor Oye. With this clarification, the IGP was given the appropriate legal grounds to vacate the Agbaso led group at the secretariat. The police men that had accompanied Agbaso were withdrawn and a new group sent to accompany Igwe APGA and Labaran Maku to the secretariat.

In talking with Igwe APGA, he confirmed to 247ureports.com that he was at the national secretariat to ‘recapture’ it. He lamented bitterly at what he saw upon arrival. He said the doors were broken and inside the rooms were burglarized. “They came with thugs and hired policemen and broke into the secretariat. How desperate can these people be?”

He called the leader of the group, “a fraud who is presently a member of PDP”. Igwe APGA said when they arrived inside the chairman’s office, the place was “turned upside down” as if robbers had attacked the place. “They took all the documents and correspondents, our constitution and other valuable party materials. They acted like crooks”.

Igwe APGA indicated that he did not meet Martin Agbaso at the secretariat. “He ran away. He knows he has carried out one of his kind of illegal jobs that he is known for. We know him. He has ran away. But we will catch him. And we know his sponsors. He is another Modu Sheriff in APGA. But we have defeated him and his group of 419ers”.

Martin Agbaso had left APGA for the PDP alittle over four years ago following his disappointing outing in Imo State under Rochas Okorocha – when Rochas Okorocha was still an APGA member. While a PDP member, Igwe APGA recalls that Agbaso contested for elective post but could not garner more than two votes from Emekuku Ward 2. His ward. “He is just a person looking to reap where he did not sow”.

Following the ‘recapture’, 247ureports.com sought out the reaction of the national chairman, Victor Oye. He indicated “situation normalized. Police withdrawn on orders of the IGP. The brigands on the run”.  The same sentiment is echoed across Anambra State. A university professor at Igbariam University called Agbaso’s actions “as wanting and very disappointing”. Another commenter, Prof. Ndidi Onwuchekwa pointed at the timing of the invasion of the secretariat as evidence that Agbaso was being sponsored by an outside group whose sole interest is to destabilize the party and Obiano’s reelection chances.

“APGA is the party to beat in Anambra State. And the opposition knows it. The party has done well in the state in the last ten years. Peter Obi did his bit and Governor Willie Obiano has done wonders in a very short time. The only way they see to defeat Obiano is to try to cause confusion in the state and inside the party. But they will be shamed again. We know who Agbaso is working for”, exclaimed Igwe APGA.

In the words of the national publicity secretary of APGA, Barrister Ifeatu Obi Okoye, “This criminal invasion and occupation of APGA Office is in complete disregard of the verdicts of the court, which dismissed any claim to the leadership of APGA by Agbaso. He was neither elected at any convention of APGA nor a registered member of the party. What is happening is total gangsterism and a travesty of justice. The national leadership and members of APGA nationwide will resist this jungle conduct of Agbaso and his clique, who are obviously on a sponsored mission to disrupt APGA’s preparations for the re-election of Governor Willie Obiano in the November governorship election in Anambra State. It is shocking how Agbaso was able to recruit policemen to lead an illegal invasion and destruction of APGA National Headquarters in total disregard of court rulings declaring him a persona non-grata as far as APGA is concerned”.