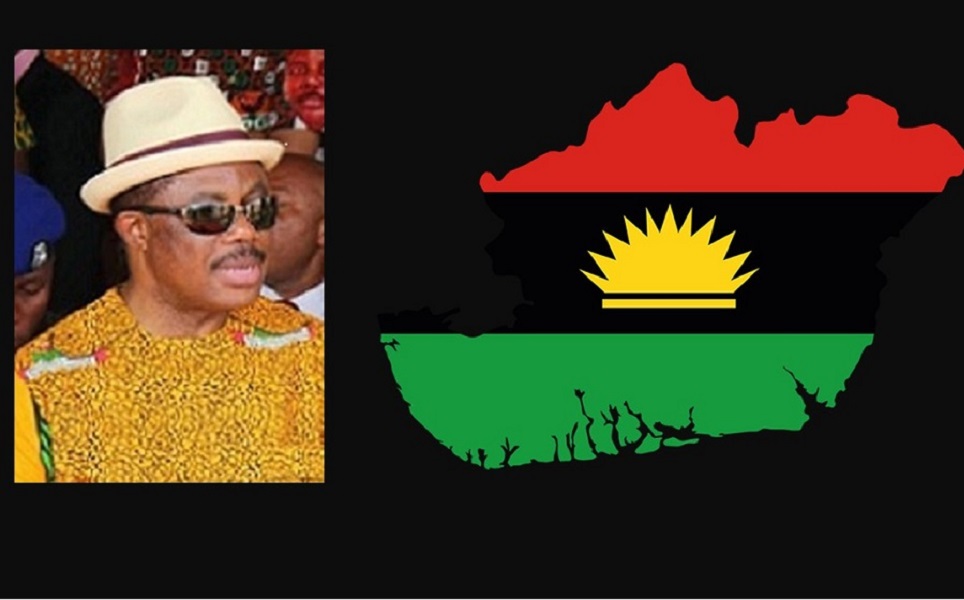 As the change in the national discourse grows increasingly towards national restructuring and/or referendum, many within the political cadre of the affected regions have begun repositioning their political antennas and dragnets to adjust to the changing times and tides.

It is to this foreground that the dynamics of the upcoming gubernatorial election in Anambra State presents itself.

The gubernatorial election in Anambra State which comes to a tee on November 18, 2017 has also been transformed in terms of the pertinent and pressing issues on the tip of the minds of the voters. This is resulting from unanticipated influence of a new breed of dedicated Biafra agitators who have had an undue influence in the minds of the aspirants and the voting populace. And, this is largely coming from the freedom group called the Indigenous Peoples of Biafra [IPOB] led by the fiery returnee from the United Kingdom, Nnamdi Kanu.

Ben Obi aka Mbuze Agulu aka Igwe APGA did not hold back shots as he made clear the Gov Obiano was the only one standing to carry out the final funeral rites for the fallen Biafra war heroes. According to Ben Obi, the idea came from him and he advised the Governor in the same manner he had advised the former governor Peter Obi to carry out a final funeral rites for the many fallen heroes who were never given a befitting good bye according to Igbo tradition. He claimed that Governor Peter Obi refused to take the advice claiming that he had not lost anyone in the Biafran War – and so had no interest. “Peter Obi was worried about offending the powers that be in Abuja and he was concerned about jeopardizing his billion naira business investments”.

According to Ben Obi, Willie Obiano stood alone. “No one wanted to be associated with the burial. It was only Arthur Eze who neared the place cautiously. Jim Nwobodo, Orji Uzor Kalu and Rocha Okorocha all refused to perform the final burial rites”. They did not take it seriously.

The final burial rites was performed in Awka at Ekwueme Square with many of the Biafran veterans in attendance from across the nation. The ceremony was performed and well received. Ben Obi makes the claim that it was through the ceremony that the spirits that were bothering the State of affairs were tamed and appeased. “It helped us stop the scrooge of kidnapping and incessant robbery and now we have the new agitation for restructuring even from Ibrahim Babangida”.

He continued, “Igbos don’t play with their dead. We take our ancestors very seriously. We revere them and treat them with reverence”. Ben Obi sights the singular act by Willie Obiano to be the most significant thing done for Biafra and the fallen heroes since the end of the war.

“Leave Willie Obiano alone to govern in peace” complained the governor’s aide as he was referring to the constant attacks by opposition. He pointed particularly to the former Governor and his former boss and kinsman, Peter Obi as a man should not be trusted. “Politicians can’t be trusted if they hop from one party to another party”.   The former aide told 247ureports.com that he had made it clear to Peter Obi, in private and public, that “he was not doing well”.  According to Ben Obi, “the first time told him was at a Sunday Service in Awka conducted by Father Jonas Benson. I told him in front everybody. And I was still working for him then”.

Ben Obi then moved his pointer to the former federal minister of aviation and aspirant for governor under the United Progressive Party [UPP], Osita Chidoka. In particular, Ben Obi called the former aviation minister for his commentary on the proposed airport to be housed in Anambra. The former aviation minister had raised concerns over the contractual details to the airport. The Obiano administration were unsettled by what it perceived as criticism from an aspirant. And to this end, the surrogates of the Governor have called to question the activities of the former aviation minister while he served as the core marshal for the federal road safety commission. In the words of Ben Obi, “we don’t want your road safety money here in Anambra. We don’t want your aviation money here either. Willie Obiano is doing fine”.

When 247ureports.com contacted the media group of Osita Chidoka for response, they opted not to join issues indicating that the former aviation minister has chosen not run a negative campaign against the governor.