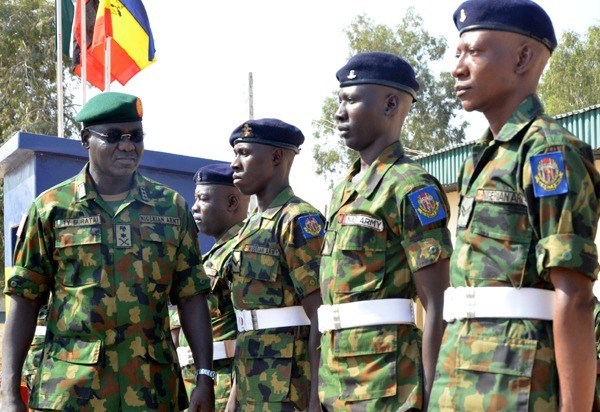 The 7 Division of the Nigerian Army on Sunday concluded the training of 40 security guards to strengthen security in Internally Displaced Persons (IDPs) camp in Maiduguri, the Borno capital.
The Division’s General Officer Commanding (GOC), Maj.-Gen. Shauib Waidi, said that the measure was to close security gaps in the camp.
“This camp has close to 30,000 occupants; alot of things have been happening where Boko Haram were infiltrating into the camp.
“We felt we needed to have a home grown security response like this one that was specifically created to secure the camp,” he said.
The GOC, represented by Lt. Col. Agbo Solomon, Commander, 195 Battalion, said that the security guards had undergone intensive training on small arms handling with emphasis on safety and protection.
He added that they were trained in unarmed combat, how to disarm adversaries during attacks, and defend themselves using combinations of physical combat techniques.
“They are equally trained on intelligence gathering; how to process and relay information with  their own inputs using the  appropriate channels.
“They have also been trained on how to respond to fire incidents which is recurring every year in this camp that is housing about 30,000 persons,” he added.
Wudil explained that the initiative would cement civil-military relations and  encourage the host community to be actively involved in securing their area.
The GOC encouraged the IDPs to be security conscious and report any suspected movement or strange activities that would breach the peace to security agencies.
In his remarks, Borno Commisioner for Youth and Sport, Seina Buba, lauded the efforts of the Army and Civilian JTF towards restoring lasting peace in the state.
Buba said that the initiative would be replicated in other camps across the state to ensure more protection for the IDPs.
He said the state government was working to close all IDPs camps in the state, so that people would return to their respective communities.