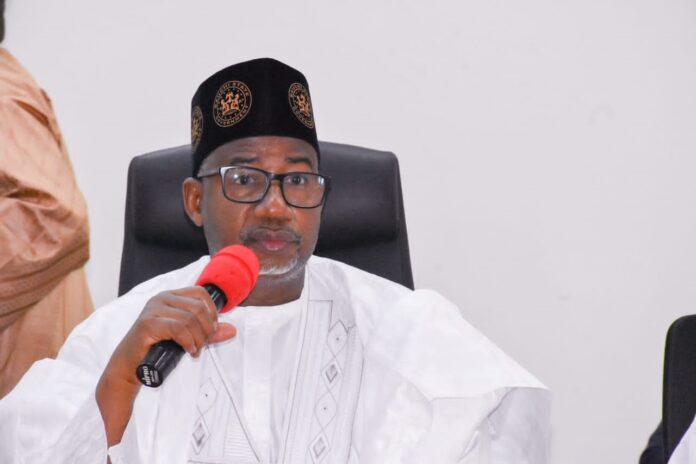 Advertisement
From Mohammed Nasir Shuaibu BAUCHI
Bauchi State Government has said that its has uncovered one thousand four hundred and eighteen ghost worker’s on its  nominal roll in the State civil service.
This was disclosed by the Secretary to State Government of Bauchi, Barr Ibrahim Kashim during a press briefing with Journalists and leaders of Labour Union held at Banquet Hall Government House, Monday in Bauchi.
According to him said that present administration of Governor Bala Mohammed is determining to end long and lingering issues of salaries inherited from the past regime of huge wage bills that was growing, and today no one know the exact number of workers we’ve like no one is death, retired, transferred or leaving the service.
He disclosed that the administration was able to reduce its expenditure costs on both local and State government levels from 3.5 billion naira to 2.8 billion naira and from 3.2 billion naira 2.9 billion naira respectively.
He, further disclosed that the administration have clean up all outstanding salary backlogs in the system nominal roll in both local and State government levels in the Bauchi State. Adding that LG worker’s have no one single case in respect of Salary withhold.
Kashim, explained that the State government have now established a Desk Complaints Unit at every MDAs for recieving and upwards channels of compliants from genuinely staff when he/she has not been paid”,.
“We’re proud to say Bauchi is one of the State that is paying Salary as at when due to its worker’s in the Country”,.
The SSG, therefore, called on the general public to disregard such false and fake news from unpatriotic citizens who want to politise the whole situation differently in fervour of their political motives.
In his speech, the chairman,  Nigerian Labour Congress (NLC), Bauchi State Chapter, Comrade Danjuma Sale, commended the Governor for the gaint effort in solving the lingering salaries issues in the State.
Sale, however, reiterated his Union commitment to the plight of only genuinely civil servant in the State.