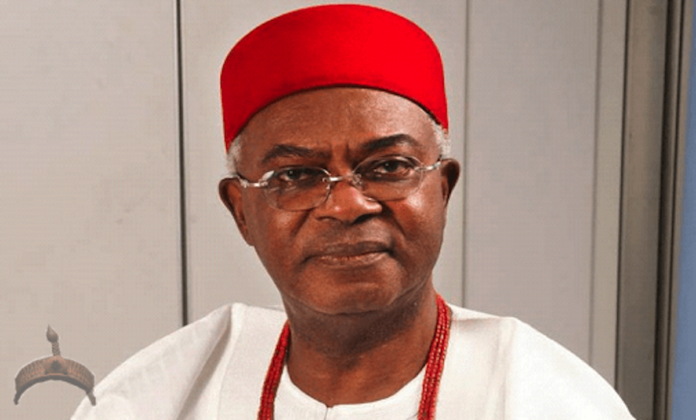 The Obi of Onitsha, Igwe Nnaemeka Achebe, has accused the National Drug Law Enforcement Agency (NDLEA), the Nigerian Army in Onitsha Cantonment and the police officers in the area of aiding the sale and use of hard drugs in the commercial city of Anambra state.

Igwe Achebe said that based on his findings and the relevant information available to him and the leadership of the community, the aforementioned state actors not only encouraged the sale of illicit drugs in the town, but also consumed them.

The revered monarch, who was visibly displeased about the seemingly increasing rate of hard drugs’ use in his domain, made the accusations when the officials of the National Agency for Food and Drug Administration and Control (NAFDAC) paid him a courtesy visit in his palace.

Director General of NAFDAC, Prof. Christiana Adeyeye, represented by Mrs Ngozi Onuora, the Director of Chemical Evaluation and Research Directorate, led the team who were in the state for a sensitisation programme targeted at educating the residents of the area, on the dangers of using dangerous chemicals to preserve foods, among others.

Achebe narrated a pathetic story of how his efforts to fight the illicit drug use in Onitsha were frustrated by the NDLEA, who were suspected to have taken bribes.

The monarch said that even when the state governor, Chief Willie Obiano, directed the leadership of the anti drug agency to act on his complaints, nothing was done over six months after.

This, he said, prompted the community to resort to self help by pulling down some of the houses where the suspected drug peddlers operated from.

“There was a complaint to the governor. The governor directed them to do something about it. It was a written complaint. After several months of complaining and talking to them, nothing happened.

“There was a complaint that somebody’s house was pulled down. The owner of the house pulled it down. It was rented by a relative. If the police could respond so quickly, why couldn’t NDLEA respond over six months, almost a year of steady complaints?

“I am not afraid to say that money was involved because they got paid off; those who refused to act and those who acted immediately. So, I minuted the letter to the police back; that they should come and arrest me; that I am the one who pulled the place down. And that’s how the matter ended.”