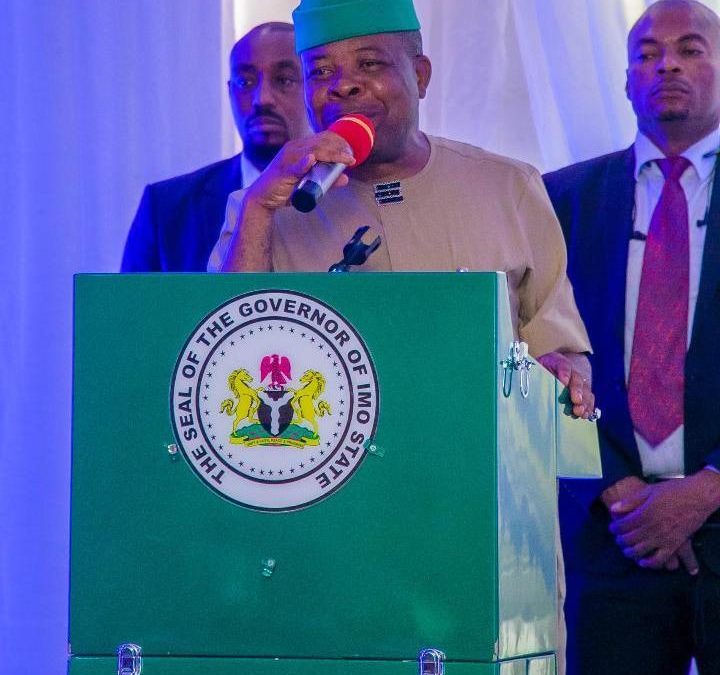 Ahead of the yuletide and towards improving the sanitation in the state, Governor Emeka Ihedioha CON, has charged Chairmen of Interim Management Committees, IMC and Chairmen of ENTRACO in the 27 local governments in Imo State, rid it of filth and ensure a healthy environment

He also warned that he will not hesitate to take appropriate actions against any LGA Chairman or ENTRACO official, who fail to keep his or her LGA clean.

This is also as the governor has ordered the immediate shutdown of hotel (M2 International Guest House), Amakohia and Tapa Pure Water, Orji over a physical attack on ENTRACO Enforcement Team on Illegal Dumping of Refuse who was on their lawful duties.

At a crucial meeting with the LGA Chairmen and ENTRACO officials held at the Government House, Owerri, Monday, Governor Ihedioha, declared as unacceptable the current state of sanitation, particularly in the state capital, Owerri and harped on the need to adopt strategies to improve on refuse collection and disposal across the State, especially during this festive period.

The governor charged Alex Emeziem, Special Adviser on Sanitation and Environment and General Manager, ENTRACO and his team to immediately ensure that there is improvement on the sanitation in the state.

“We must make Imo very clean and healthy. Therefore I want to see a rapid improvement on our culture of sanitation to rid the state of dirt.

The governor warned that his administration will not tolerate any form of attack on any government official on his or her lawful duties. He further charged citizens to be law abiding and cooperate with the government to deliver on its promises.

While stressing the need for ENTRACO to ensure self funding to carry out their activities, he vowed never to put the state under further debt burden, adding that citizens should as a matter of civic obligation comply with the payment of sanitation levy to enable ENTRACO discharge its mandate effectively.

He also urged them to generate revenue for their activities and programmes, noting that all over the world, refuse management which include refuse collection, gathering and disposal, has become big business venture, and urged the LGA Chairmen to involve the youths within their domains, to take active part in refuse disposal.

He also directed LGA Chairmen to set up ENTRACO units in the 27 LGAs as part of measures to ensure effective waste management across the State.