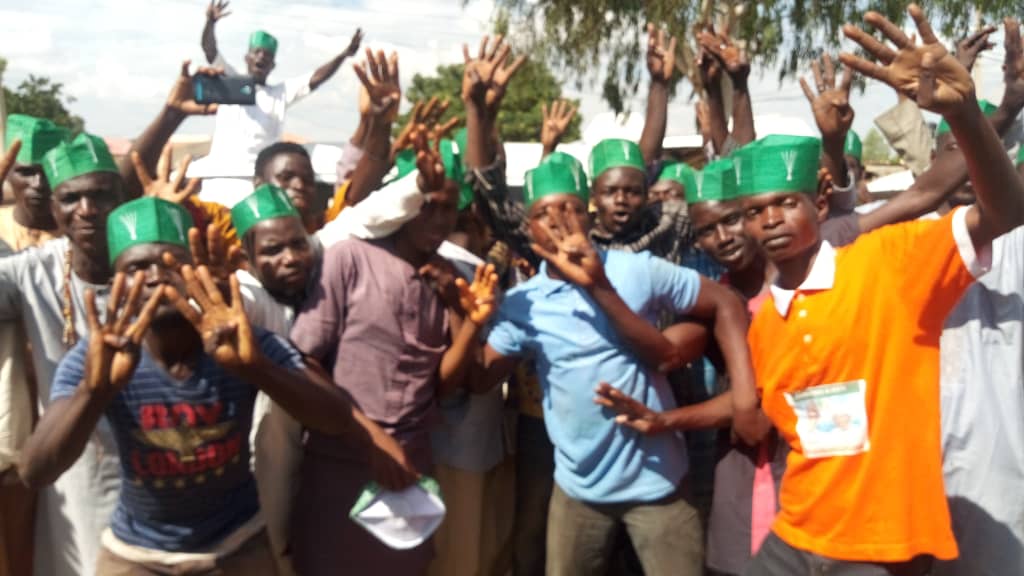 Kano state Governor, Dr. Abudullahi Umar Ganduje on Wednesday evening addressed a mammoth crowd at Government House roundabout after over four hours of meandering the streets through Malam Aminu Kano International Airport (MAKIA) where he was held up by unprecedented crowd.

Ganduje who dedicated his victory at the Tribunal to Kano people also reiterated his resolve to ensure that every child in Kano gets quality and free education.

He thanked Kano people for their support and described his victory at the election and Tribunal as victory for all.

Ganduje stated this while addressing a mammoth crowd who gathered to welcome him, after his two-week trip out of the state.

According to him, “we made it very clear that basic education is free and compulsory for all children in Kano state. We made it clear that the Almajiris system of education will be integrated into the mainstream education system.

“We also made a resolution that all out of school children will go back to the class room. This is a task that must be done. We must ensure free education for our children and also provide skill acquisition programmes for our teeming youths.

“We are also very much concerned over the welfare of the physically challenged. We will take care of them. We will send them to school. We will create job opportunities for them. We will empower them; and ensure that their children, too, go to school.”

Ganduje who was visibly elated further stated that, “our administration loves everybody irrespective of political affiliation. We love you all. We are peaceful and all we pray is for the development of Kano state. Remain peaceful and law-abiding. I am indeed grateful for your support.”

He also told the happy crowd that, “I thank you for your appearance, we thank you for all that you have done in order to ensure our success in the last election.

247ureports.com reports that the ancient city of Kano on Wednesday stood still as thousands of residents trooped out to welcome Governor Abdullahi Umar Ganduje who was away from the state for two weeks.

The hilarious crowd trooped out in solidarity to celebrate with Ganduje who a week today savored victory at the Kano state Governorship Election Tribunal.

Though the Tribunal’s verdict triggered off wild jubilation across the state last Wednesday, Ganduje’s home-coming attracted the biggest crowd ever recorded in Kano in recent times.

Business men, market women, artisans, students, the old and the young all abandoned what they were doing and trooped out just to have a glimpse and wave at the returning Governor.

They lined up along the streets waiving and chanting Sai Ganduje and several other pro-Ganduje songs, expressing their happiness over his victory at the Tribunal.

As at the time of writing this report, Ganduje’s convoy has spent over three hours trying to maneuver the crowd that trooped out to welcome him.