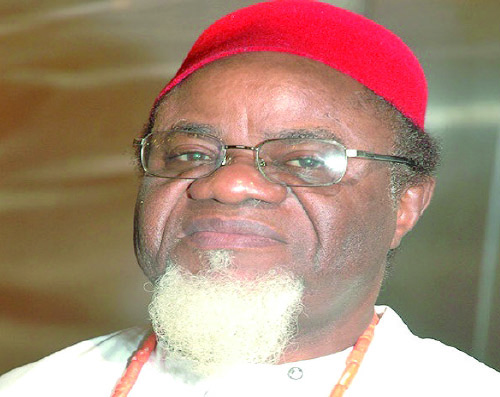 Elder statesman and former governor of Anambra State, Dr Chukwuemeka Ezeife has said that no Igbo man will still claim Nigerian citizenship if the South East zone is not supported to produce the nation’s president in 2023. In this interview with WILLY EYA, he was emphatic that denying the East the chance to succeed President Muhammadu Buhari in 2023 will be too dangerous for the unity of the country.

A major issue of concern to every Nigerian today is the increasing level of insecurity of lives and property in the country today; as a senior citizen of this country, how do you feel?

I think our traditional leaders including the Obas, Obis, Emirs and others from other areas should hold some kind of summit. It is necessary that the herdsmen are spoken to properly. Whatever happens, they are the final losers in the game, however way it ends. If they think that they are the leaders and whatever they want will happen, and they talk with some kind of arrogance, nobody enjoys beeing talked down on. They should also partner with churches and mosques to find a solution to the challenges we are facing as a country. What is happening now is very bad. I heard that about two people this morning were kidnapped in Anambra and I heard one was asked to bring N1.5 million and the second person asked to bring several millions as ransom. Such a development is not good for the country. When the British, our colonial masters left Nigeria, the Fulani had a very good name. Now, I am sure that three years from now, that is if it will be that long, some people will become hated so much that nobody will like to see them and it is not good for anybody to fall into that category. I do not want my people to be so hated and I do not also want the Fulani to be so hated. Anybody who feels he is enjoying the situation now is not realistic; it is not an enjoyable situation. We appeal to individual groups to sue for calm and we should also be talking to God with regards to the situation we find ourselves in Nigeria.

Do you agree with those who insist that the style of leadership of President Muhammadu Buhari is the cause of the crises we are having especially in the security situation in the country?

There are many things going on and some people say he is doing what he is doing because he is the patron of the Miyetti Allah. All these things should be corrected for the future of the country.

One of the narratives coming from some groups and prominent northerners is that southerners, especially the Igbo, are enjoying in the North whereas they make their place (South) uncomfortable for the herders. What is your reaction to that?

Everybody knows the truth. People may pretend but everybody knows the truth. The Igbo man is comfortable in Japan, China, United States, any part of the world. No matter the condition of any place they find themselves, they try to survive there. Anybody making that kind of insinuation knows that Nigeria has fully benefitted from the Igbo man. The Igbo man believes in Nigeria and helps in developing the country. We should all approach what is happening in Nigeria today with an open mind.

So many prominent Northerners are already flying a kite that power will not come down South in 2023 after President Buhari would have spent eight years in office. As a statesman from the South East zone which is yet to have a shot at the presidency since 1999, what is your take on the projection?

It is easy to pontificate. There will be no Igbo citizenship of Nigeria if in 2023, the South East is not given serious chance to produce the president of this country. After being given a serious chance and we could not make it, that could be understood but if anybody begins to say that there is no chance in 2023, that will be very dangerous.

The argument by some people is that the Igbo are not playing good politics by always putting their eggs in one basket. The explanation is that the region has always identified with the PDP and should not expect anything from the APC government?

I do not know how many baskets there are. People who want to follow their minds would always do so. In the 2019 presidential election, the PDP presidential candidate, Alhaji Atiku Abubakar who everybody knows where he comes from, became an original Igbo man. How could anybody have called on the Igbo to divide themselves and vote one part for Atiku and the other for President Buhari. The Igbo did not vote for one party actually. They voted for both the PDP and the APC but we followed our minds just like we followed former President Goodluck Jonathan. We cannot begin to pretend not to know where we want to go. What I am saying is that when it is our turn, let them vote for us, that is all.

But with the picture you are seeing in the country today, what do you think is the future of Nigeria?

I am sure you know me. For very good reasons, especially being an economist, I believe in one Nigeria. I prefer one Nigeria. Therefore, I believe that instead of having miniature countries called Nigeria, I prefer that Nigeria is a big country where there is peace and where the market is as large as it is and where individuals are at peace with one another. This is what I am thinking. In such a situation, nobody loses. The way I am thinking is the same way other Igbo are thinking about it; they crave for a peaceful large area.

How did the suspension of the controversial Ruga settlement policy come to you? I ask this question because many are calling for outright cancellation of the plan to forestall the backlash over fears of its long term implication on the areas where they are established.

I think there are many mistakes being made by this administration. We have a law which entrusted the land to the state governors and not to the president of the country. Therefore, if we follow our own law which we gave ourselves, it will be better, instead of looking for land that does not belong to the Federal Government.