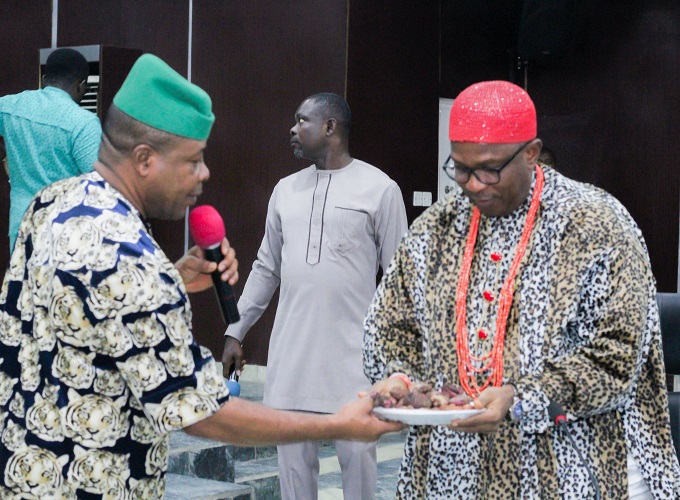 Governor Ihedioha has called for the continuous support of the traditional institution in the state in his drive to bring the state out of the burden of infrastructural decay and bad governance.

He stated this when he received the Concerned Traditional Rulers Forum of Imo State on a courtesy call at the Government House, Owerri, Thursday

The Governor thanked them for their support and cooperation since he assumed office, stressing, that the state of infrastructure in the state is the poorest in the country and so requires all hands on deck to bring the state back to life. “We have a burden of infrastructural decay and we can’t achieve the desired rebuilding of our state without correcting the faulty foundations of our infrastructure. The way the state was run, if it has continued, we may not have been able to sustain ourselves as a state”.

He promised to commence the process of holding town hall meetings at both local government and at the state levels.

On the requests of the group, the Governor promised to consult relevant authorities and reassured the commitment of his administration towards entrenching due process and rule of law.

Earlier, leader of the group, Eze Cletus Ilomuanya, congratulated Governor Ihedioha on his victory at the polls, commended his focus and deliberate actions of his administration.

“Your Excellency, you have been chosen at a time like this, when the people of Imo State who have been bruised with gross maladministration by the past administration, needed a savior whose duties will not only be to clean the rubbles into which the state has been plunged for so long a time but to chart a proper direction to attain the development of the state. We wish to express satisfaction with the people-oriented policies and actions of your administration”, he noted.

He pointed that his members are the traditional rulers that were suspended by the past administration for receiving President Jonathan when he visited the state in 2015, a matter they challenged and won in the court.

Contributing, the secretary of the forum, Eze Ama Durueburoe highlighted a litany of their prayers, which include; recall of Eze Ilomuanya as Obi of Obinugwu and Chairman of Imo State Council of Ndi Eze along with the unlawfully dissolved Council, in line with the decisions of the courts; recall the three traditional rulers earlier dethroned by the past administration and who got judgment at the court for their recall; repeal Imo State of Nigeria Traditional Rulers, Autonomous Communities and Other Matters, Law No.15 of 2016, which, according him, was made for the purpose of favouring a few individuals and without any contribution from traditional rulers. And return Imo State of Nigeria Traditional Rulers and Autonomous Communities Law,(2006), among others.

The traditional rulers expressed their readiness to contribute selflessly to the rebuilding process and called on the people of the state to continue to support the efforts of the government towards the transformation of the state.