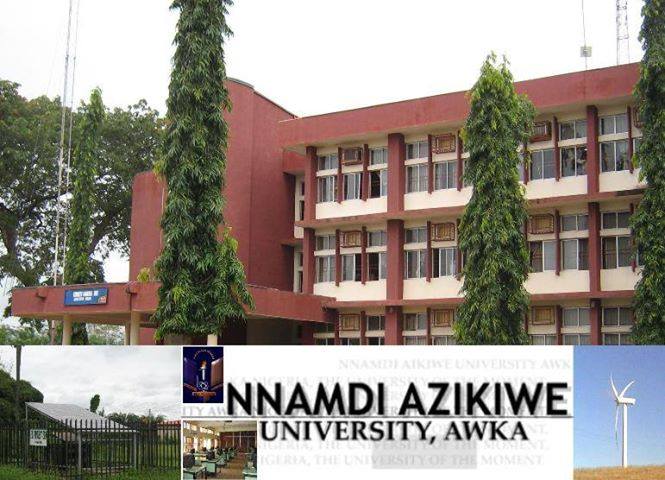 The new Vice Chancellor of the Nnamdi Azikiwe University, Awka, Prof Charles Esimone who assumed office this afternoon has indicated what would be the policy direction of his administration as he read a riot act to staff and teachers.

He didn’t mince words warning that all non productive staff of the university would be declared redundant and shown the way out if they failed to improve.

Prof Esimone charged all the teaching and non-teaching staff of the institution to sit up as his administration would not condone untoward practices. He also spoke on plans to address the infrastructure challenges in the university, and disclosed he would vigorously pursue the option of public private partnership (PPP) with individuals and organisations to build hostels and improve the institution.

The Vice Chancellor, directives that rang through the capacity-filled university auditorium in a pin-drop silence during the formal handover ceremony stated, “I am coming into this job with a vision primed on promoting the highest standard of academic excellence, productive community service, administrative reforms, discipline and advances in matrix of human capacity building, infrastructural development and students/staff welfare.

“There’ll be zero tolerance to plagiarism, sexual harassment and inducement. A mechanism with be put in place to identify and punish culprits accordingly.

“Productivity would be required of every staff, non-performing staff will be declared redundant and could be shown the way out if they do not turn a new leaf. Productivity bonus will not be mandatory, it will have to be earned.”

“We’ll also pursue complimentary collaborations with foreign universities to enable our researchers carry out procedures where we lack capacity,” he said.

Esimone who came into limelight as the Idemili North Council area Returning Officer for the Anambra Central Senatorial election crisis between the immediate past Minister for Labour and Employment, Dr Chris Ngige and the former Minister of Information -Prof Dora Akunyili of blessed memory, also urged lecturers in the university to desist from any form of oppressive actions against the students as no such conduct would be tolerated. He appealed to the lecturers to relate to the students with care.