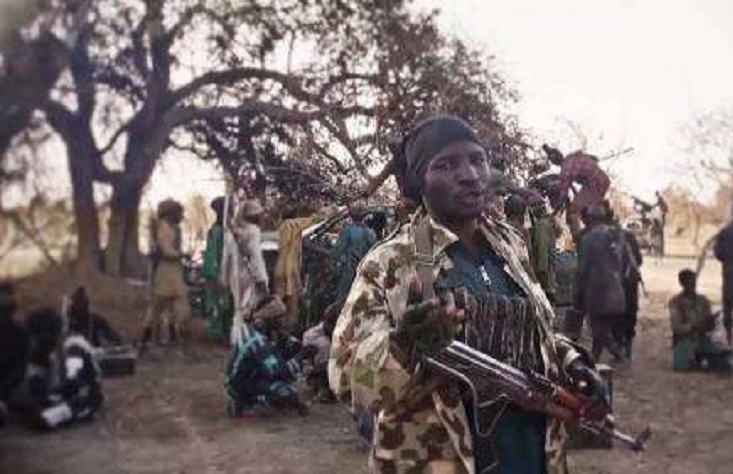 …Carts away APC, RPG’s, soldiers captured
…Nigerian security forces sabotage war against insurgency, supply food and petrol to Boko Haram – Investigation
Yakubu Ibrahim, Maiduguri
The dreaded militant group, Boko Haram in the early hours of Wednesday attacked the Bukawa Military Base in Maiduguri, Borno state killing scores of Nigerian troops and looting military hardwares.
Sources say the attack which caught the army by surprise saw the militants carting away some Armoured Personnel Carriers, (APC), Rocket Propelled Grenades (RPG’s) and other military hardwares.
The army recorded some unspecified number of casualties while scores were captured by the insurgents and taken as “prisoners of war”.
A source in Maiduguri who asked not to he named due to the sensitive nature of the crisis said, the attack has not only exposed the complicity of some top military brass of the Nigerian army who are working for the insurgents and making brisk business for themselves out of the war against Boko Haram in the North East but has also demoralised and weakened the moral of the men in uniform fighting the insurgents.
“All is not well with the war the military high command is pursuing the war against Boko Haram in the zone. The war against Boko Haram is now business where some top military generals make money at the expense of national security and the welfare and lives of the soldiers in the front line”.
” The officers on the front line are not motivated because of the politics of the war. Soldiers from the Southern part of the country are sent to Maiduguri to fight and die while Northerners are deployed to promote and protect oil facilities in the Niger Delta region. This is one dubious politics that has undermined the army’s ability to contain the insurgents and win the war which is getting worse by the day despite the billions of naira spent to prosecute the war” said a military source in Maiduguri.
The source said, the failure of Nigerian troops to contain the insurgents and the frequent invasion of military base and carting away of equipment by the terrorists is adding another dangerous dimension to ongoing war, as having new military hardwares and technology falling into the hands of terrorists poses a much bigger threat to not just the security of Nigeria but the entire region that is battling with porous borders and lack of inter-agency cooperation from neighboring countries in the region.
In a related development, an investigation by The Next Edition, an online newspaper, has reported that Nigerian security operatives are significantly sabotaging the government’s efforts to eliminate Boko Haram as they aid the funnelling of huge volumes of petrol and other fuel products to the deadly group.
According to Mr Ibanga Isine, the soldiers, police, customs, immigration and civil defense operatives frequently receive bribes and turn a blind eye as fuel marketers and smugglers divert truckloads of petrol and foodstuff to Boko Haram enclaves in Nigeria and neighbouring countries.
During interviews with security operatives, marketers and undercover exploration of the dark market, the newspaper obtained details of the well-coordinated transactions and is able to provide a glimpse into a largely unreported and unregulated operation that has clearly fed the insurgency in the Northeast and helped prolonged the nine-year war.
The reporting has also shown the impact of the large-scale murky operation on the nation’s petro-economy.
Highly classified sources said not fewer than 60 trucks loaded with petrol and an equal number carrying foodstuff illegally leave the country through Adamawa State daily.
This newspaper learnt that Boko Haram insurgents get their food and fuel supplies from the diverted products.
Each day, operatives of the Nigerian Army, Nigeria Police, Nigeria Immigration Service, Nigerian Customs Service and the Nigeria Security and Civil Defence Corps, NSCDC, manning the many checkpoints across Adamawa State extort bribes ranging from N500 to N300, 000 from motorists in order to allow them to pass regardless of the vehicle convey .
The smuggled fuel is sold at lucrative rates either to the Boko Haram insurgents, a group that has waged war against the Nigerian state since 2009, or is ferried across the border.
Today, Nigeria’s subsidised petrol and foodstuff are being illegally sold in countries such as Cameroon, Niger, Chad and in the Central African Republic.
The military sources said Boko Haram has relied on such smuggling fuel to power their vehicles and motorcycles when going for attacks.
Repeatedly, security services in Borno, Gombe and Yobe have either arrested suspected Boko Haram fuel suppliers or seized huge consignments of petroleum products believed to have been procured for the militants.
In July 2016, the Army in Borno State arrested a man it said was a supplier of fuel to Boko Haram.
According to the News Agency of Nigeria, NAN, the suspect was arrested with a truck loaded with 25 jerry cans of petrol and other goods cleverly covered in cartons.
In January 2018, the NSCDC in Borno State said it seized 1,000 litres of petrol from suspected Boko Haram fuel suppliers. The NSCDC Commandant, Ibrahim Abdullahi, told the NAN that the products were filled into jerry cans and concealed in sacks. In June, the Army said it arrested two other men in Gombe for allegedly selling large quantities of fuel to Boko Haram. Concealing fuel-filled containers under sacks would turn out a common method for hiding smuggled or diverted products in neighbouring Adamawa as this investigation has shown.