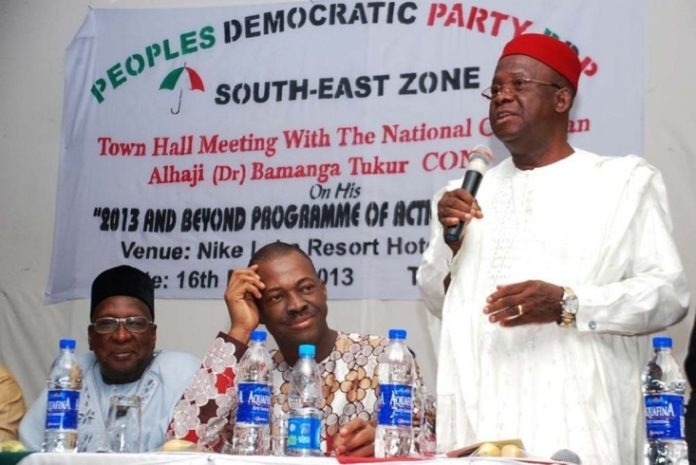 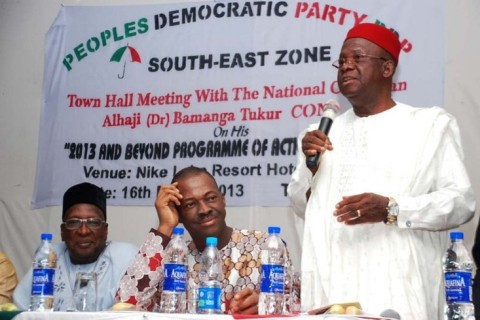 With peace and harmony, which are gradually returning to, the ruling
Peoples Democratic Party, Ebonyi state has described the opportunity
as best to root out and ostracize the opposition parties in the state.
Firstly, the Ezza nation has identified PDP as the only platform that
would give the people, dividends and democracy and good
representation.
All the traditional rulers in Ezzas especially in the Ebonyi central
zone, have further demonstrated their support for the PDP by openly
endorsing the senatorial ambition of Governor Martin Elechi.

All supporters of the opposition parties, including the APC in the
clan have been warned not toe the path of destruction by supporting
the party, which has done nothing especially when the clan was pushed
to the path of War in Ezzillo.

Ezza/ Ezillo communal land disputes, to many political observers were
motivated by clash of political ambitions. Ezzas believed in PDP. And
unless they join the ruling party, the name of the clan may continue
to alienate them from the government of the day.

The grand plan now is to strip out the seats, which APC is parading
both in the state house of Assembly and federal house of
representative.

Already, The people of Ezza nation have threatened to withdraw their
supports for the member representing Ishielu/ Ezza North federal
constituency, Hon. Peter Edeh in the 2015 general election over an
alleged tightfistedness, sabotage and inconsistency with his mandate.

The people argued that the value of governance does not depend on the
loudness of voices but on the quality of developmental interventions
for the common god, and lives are ultimately measured by the quality
of landmark they leave for posterity.

It is an opportunity to prove that true leadership is anchored on
vision rather than on propaganda. Rather than reciprocating the
gestures which the people of Ezzas invested to ensure that the Agba-
born politician, Hon. Peter Edeh emerged victorious against the
emergence his close rival and son of Ezza nation, Chief Nomeh Ogodo
Ali, the investment has refused to yield positive results.

Now, Ezzas are biting their fingers in regret that the sold mandate
was a colossal mistake which must never repeat itself in the 2015
general elections. The political gang up against the federal lawmaker
was borne out of the conviction that he has not rendered democratic
dividend to his constituents in the two local governments of Ezza
North and Ishielu respectively.

Edeh’s breakthrough was the fall out of the support of Senator Julius
Ucha, the defunct ANPP 2011 governorship candidate, who gave Governor
Martin Elechi the lasting heat  since the creation of the salt of the
nation.

This is not that the party has performed creditably to have won the
admiration of all but the politics played in the state is self
centered.

2011 general election was the landmark breakthrough for the opposition
party in the state as the defunct All Nigeria Peoples Party captured
three seats; one House of Rep, two seats in the state house of
Assembly.

And this was possible because of the strong opposition played by the
former ANPP governorship candidate in the 2011 election in the state
by Senator Julius Ucha, which many thought would unseat the ruling
party.

Though, there was much apprehension in the PDP family because of legal
battle that enveloped the election. Senator Ucha pulled large crowd
that was intimidating to the political watchers in the state. And the
fear that grips the supporters of the ruling party  was that,
considering the level and shape of the cases that laid ambush in the
court, the worst of canceling the governorship election may give
victory to the opposition party.

This was because, if any of the courts that handled the matter should
award victory to the opposition party or cancel the election,
aggrieved members of the party, who failed in the primaries for state
and national assembly will join forces with the opposition to make
sure that Governor Martin Elechi did not come back.

Many of them secretly worked against Elechi, some were engrossed
watching the pendulum before coming openly to support any candidate.

But having realized that it was unhealthy decision taken against
Elechi, Ezzas have realized it was a mistake and any support, like a
convert Saul, may likely come from them.

In spite of all the breakthrough and support giving to ANPP that led
to its victory in some seats by youth, religious leaders, market
unions and interest group, watchers have concluded that the expiration
period of the ruling party was around the corner, if the opposition
should sustain the efforts made in the last elections.

Even with the emergence of three opposition parties, Action Congress of Nigeria,
Congress for Peoples Changes, All Nigeria Peoples Party to form a
formidable All Progressive Congress to wrestle power from the ruling
Peoples Democratic Party, Ezzas have vowed to support their sons and
daughter rather than installing aliens on sympathy or sentimental
grounds.

The empowerment programmes became assessment index. However, Okwuru
won the admiration of all Ezzas because of the quantum of training and
empowerment equipment he procured for his constituents.

Though if Edeh chooses to run on the platform of the APC, the fight of
supremacy which has riddled the party among the strong opposition
leaders in the state may be a clog on the wheel of progress.

Three factions have been visibly created in the fold over who is the
authentic leader of the party in the state. One of the factions is led
by Chief Ugo Chima, APC chieftain and former member of house of
representative, who represented Ikwo/ Ezza South Federal constituency
between 2007-2011. though, APC may be hiding the skirmishes in the
party for the meantime, but its membership are failures.

Unarguably, His faction has the former chairman of defunct ANPP, Chief
Ogbonnaya Onu as the leader of APC in the state. He assured the people
of the State of its resolve to take over the seat of power from the
Peoples Democratic Party, PDP, during the 2015 general election in the
state.

The party which described the modus operandi of the present
administration in the state as a one man’s show expressed optimism
that APC as an agent of change would give a facelift to the State and
bring democratic dividend to the door steps of the people.

“We using this medium to thank Chief Ogbonnaya Onu for the role he
has played so far in the emergence of APC. He is a man with vision and
honour; a man who can hold his head high anywhere in the world. The
foundation of APC will be properly laid in Ebonyi and our mission is
to sweep PDP out of the state.  We shall do everything necessary to
ensure that we remain in opposition.

Another faction led by the National Officer of APC, Hon. Jacob Ogodo,
from Ebonyi state disassociated themselves from the recent publication
in some National Dailies credited to one Innocent Ugo Chima and his
likes claiming that Chief Ogbonnaya Onu, the Ex National Chairman of
the defunct All Nigeria Peoples Party, ANPP has been appointed the
leader of the party.

The third silent faction lay claims that senator Julius Ucha still
remains the leader of the new party in the state.

Ucha was the leader of the defunct ACN in the state. He shunned the
stakeholders meetings conveyed by Ugo Chima. Ucha and Chima were close
allies but suddenly parted ways with the senator after their defeat of
2011 general elections.