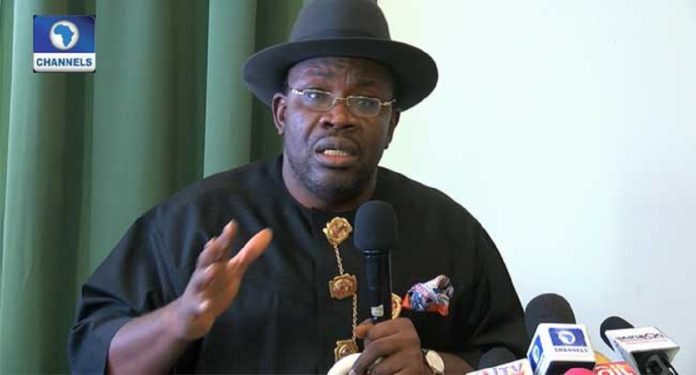 Former Bayelsa State Governor, Henry Seriake Dickson in Abuja on Friday regretted that 20 years after the return of civilian government, the foundation of democracy had remained shaky.

In describing Nigerian democracy as an aberration, he suggested that attention should be shifted on the leadership recruitment process.

While premising the development on the ignoble actions of some politicians, especially during elections, therefore called on political leaders in the country to continue to work for the sustenance of democracy.

Dickson, represented by his former Commissioner for Information and Orientation, Daniel Iworiso-Markson, raised these concerns in his lecture entitled: “Election, Good Governance and Democracy in Nigeria”, at the Daily Assets Newspaper annual awards and lecture in Abuja, stressed that no sacrifice is too much for democracy, which he asserted remains the best form of government the world over.

He said democracy has suffered a lot of setbacks because of the lack of respect for its institutions by those who are saddled with the responsibility to protect, preserve and defend its tenets.

Dickson said, “When the rule of law, freedom of speech and association is not allowed to thrive then there is danger. The three arms of government must have mutual respect for one another. No arm should be overbearing.

“Frankly, democracy is in decline in our country and we must all be worried. Of course the correlation between democracy and development has since been proven and we must take note of that. Without a sound Democratic system, development will continue to elude us.

“Democracy as we know it in Nigeria is nothing but an aberration. I also think we should take a second look at our leadership recruitment process. Sure we need more good people in politics who can help to safeguard sound leadership and the important question of good governance.

“But that itself would come as a product of a functional democratic process. Imperative to give democracy a chance to flourish in Nigeria by keeping to its universal best practices.”

The former Bayelsa Chief Executive also expressed worry that elections in the country has fallen short of expected standard because of a number of avoidable factors by stakeholders.

He said, “Elections are an invaluable element in a democracy. Regrettably,  election in Nigeria has become problematic. Elections in Nigeria has been characterised by violence, high level rigging and manipulation. Vote buying and ballot box snatching are also part of the common features of our elections.

“All of these are caused by the lucrative nature of political offices. Politicians acquire guns for youths and pay them some little money to disrupt elections and force their way through.

“The associated impediments above do not guarantee true democracy as government of the people by the people and for the people as most acceptable definition of democracy. This is because the people are not usually allowed to decide election results. In this situation, election as we have witnessed in recent times, does not truly serve its purpose and this is unfortunate.

“In 2015, there was large scale violence in Bayelsa that claimed several lives. Also in the last general election, one of my photographers, Reginald Dei and a member of our party the PDP, Hon. Taribi Seidougha were murdered in cold blood.

“An Assistant Commissioner of Police who was in Brass Local Government Area to monitor the elections there managed to escape after being beaten and molested by political thugs acting the script of their desperate political sponsors.

“We must also condemn the use of state agents like the military for elections because an election is a civil contest and the presence of the military intimidates would be voters. So, we must get our elections right by upholding the basic tenets of transparency, free, fair and credible elections.

“The recent pronouncement of the Supreme Court on the Bayelsa  governorship election is a clear example why our electoral process should be refined to ensure credible people in public office. In this connection, I believe we need to devote due attention on electoral reform.”

On good governance, Dickson explained that when the processes that throw up elected officials to public office are deeply flawed, the people suffer a great deal and development is retrogressed.

Dickson said, “Many of those elected do not have the required capacity nor do they have the interest of the people at heart in relation to their expected statutory functions.

“So they can afford to behave as they like since they are not accountable, after all they got into office through the “backdoor” and believe they can always manipulate election to be reelected.

“This situation must change. A systemic arrangement that does not get us the best people to govern and thus poor leadership and ineffective governance with dire consequences on the well-being of the people. This is undesirable indeed. Good governance should be the goal of any government interested in improving the quality of life of its people.

“In Bayelsa State for example, the 8 years of Restoration government will remain indelible in the hearts and mind of the people because of robust delivery of democratic dividends in virtually all sectors of the state’s economy with the introduction of landmark policies and programs.”