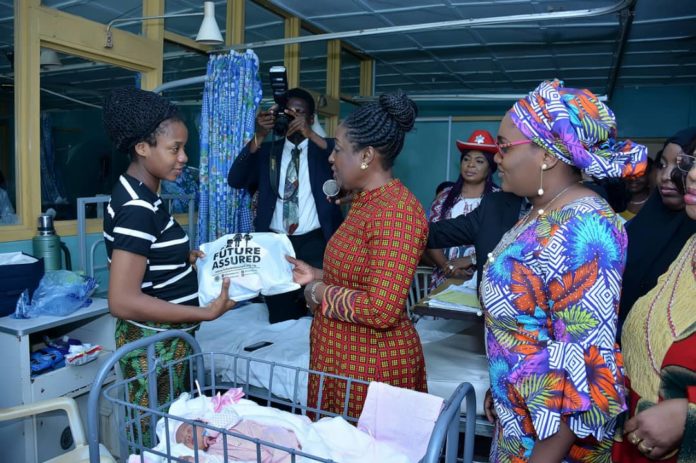 As part of her humanitarian activities of bringing succor to less privileged persons in Nigeria, First Lady, Dr. Mrs. Aisha Muhammadu Buhari has sent a delegation to Benin City, Edo state to present food items and other nutritious commodities to inpatients and outpatients currently receiving medical attention at various hospitals in the state.

Four hospitals where visited by the Future Assured team including the University of Benin Teaching Hospital where the Chief Medical Director. Prof. Darlington Obaseki received and conducted them round the hospital for the distribution.

In what the head of delegation, Zainab Kassim, Special Assistant to the President in the Office of the First Lady described as a mercy mission, the aim of the visit was to identify with the patients and to show them love as well as to give them a sense of belonging.

First Lady of Edo State, Mrs. Betsy Obaseki welcomed the team and commended Mrs. Buhari for remembering those in need, especially at this yuletide.  She called for the replication of such mercy missions to spread love and compassion in the nation.

The team also visited Stella Obasanjo Hospital for a similar gesture and the Medical Director of the hospital Dr. Ifohan Ebohmwonyi expressed appreciation for this intervention describing it as bringing hope to the hopeless. At the Central Hospital Benin where the delegation was received and conducted round by the Medical Director Dr. Moses Imologomhe, he expressed appreciation for the gesture on behalf of both the hospital’s management and the patients.

Faith Mediplex was also visited by the team for the same exercise. The Medical Director, Dr. Temple Oguike was overwhelmed with the gesture describing it as unprecedented.

About 1000 packs of Future Assured items comprising milk, sugar, noodles and other essential commodities were distributed.