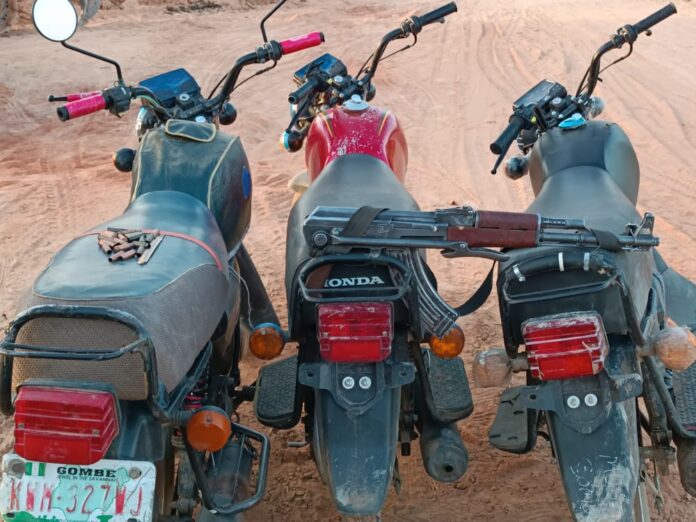 Advertisement
From Ahmad SAKA, Bauchi
Police operatives led by the Divisional Police officer in Alkaleri LGA Bauchi State of  has engaged hoodlums that attacked and killed one person in Gobirawa village, Gwana District of Alkaleri Local Government.
Police Public Relations Officer SP Mohammed Ahmed Wakil, stated this in a statement he distributed to reporters in Bauchi. He said “Police Operatives attached to the Command have recovered one AK-47 rifle, one locally made revolver and three (3) unregistered motorcycles.”
Wakil said the incident happened on the 29th of November, 2022 at about 12:20am, suspected hoodlums attacked Gobirawa village via Gwana district, Alkaleri LGA. The hoodlums numbering about six armed with AK-47 rifles and other dangerous weapons, riding on three Bajaj motorcycles invaded the village and started shooting sporadically”.
He said “During the raid, they went to a business area and burgled a kiosk shop in a bit to loot valuables. in the process, they met a 45yrs Rabiu Lawan ‘m’ of Gobirawa village who was asleep inside a shop and was shot multiple times by the hoodlums”.
Police Spokesman said “On receiving the information, the Command detectives led by Dpo Alkaleri Divisional Police Headquarters in collaboration with a local vigilante group of the area swiftly swung into action and engaged the hoodlums in a gun duel. Consequently, following superior firepower from the operatives, the hoodlums were subdued and scampered in disarray into the nearby bush with possible bullet wounds. In the process, the hoodlums abandoned one AK-47 rifle and three operational motorcycles.”
He said “the victim was evacuated to the General Hospital Kashere Gombe State, where he was certified dead by a medical doctor.”
Wakil appealed to public to report any suspicious and/or bullet wounded person(s) to the nearest Police Station.