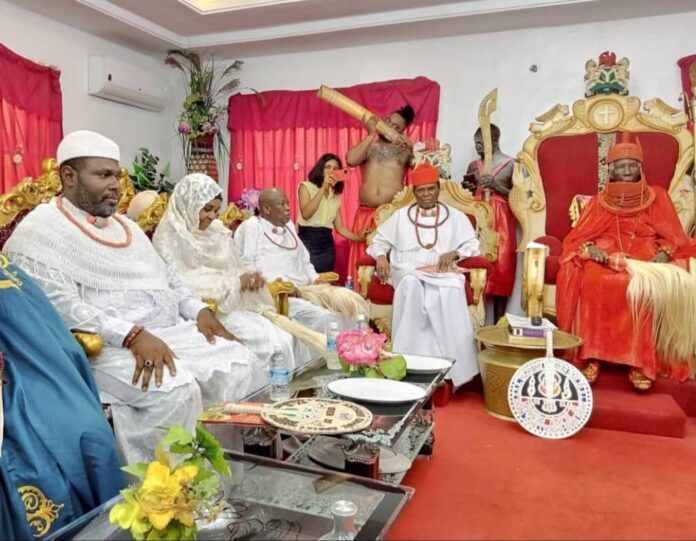 Speaking during a colorful ceremony on Saturday evening at his palace, in Ogoni Olomu, Ughelli South local government of Delta state, the traditional ruler, Ovie Dr. Richard Ogbon, said the honor was to reciprocate the respect and love shown to his subjects by the governor.

He explained that a prominent Urhobo son and a onetime military administrator of Kano State, late Brig, Gen. Dominic Oneya, had told him about the amiable relationship between him and Governor Ganduje, long before he became governor, and personally proposed that the Kano state governor be honored with an Urhobo chieftaincy title.

Ovie Dr. Richard Ogbon acknowledged that Gov. Ganduje was a detribalized gentleman who believes in national unity, even as he appreciated the governor for appointing Chief Anthony Oneya as one of his Special Advisers.

Shortly after the chieftaincy conferment rites, presided over by Olomu High Chiefs, Governor Abdullahi Umar Ganduje said the honor was in tandem with the ideals of national integration, as promoted by the National Youth Service Scheme, initiated by the Gowon administration.

The scheme, he argued, “has gone a long way in instilling the spirit of oneness among Nigerians irrespective of tribal and religious inclinations”, stressing that General Gowon deserves to be applauded for upholding national cohesion.

Dr. Ganduje emphasized that “each Nigerian tribe has its own peculiarity and such differences could be efficiently managed to form the basis of national strength”.

The governor thanked the ruler and people of Olomu kingdom for finding him and his wife worthy of prestigious chieftaincy titles, expressing optimism that the relationship between Urhobos and Kano state would continue to grow from strength to strength.

Meanwhile, the governor and his entourage took time off to visit the family of late Brig. Gen. Dominic Oneya in Warri, where his wife Mrs. Paricia Oneya, hosted them to lunch.