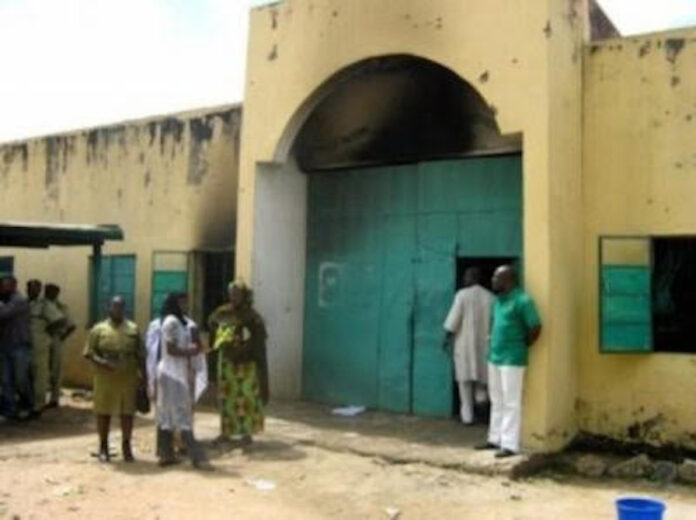 Five inmates two warders have been injured,an officer attached to the Bauchi State Command of the Nigerian Correctional Service is being interrogated for allegedly smuggling a mobile phone into the custodial centre that led to riots by the inmates.

Bauchi State Command Public Relations Officer Abubakar Adam Jibrin confirmed the incident while speaking with journalists. He said the development resulted in skirmishes between the inmates who were to benefit from the illegal deal and other staff members who bursted the plan  2 personnel and 5 inmates sustained injuries in the melee but have been treated and discharged from the facility medical unit.

He said the restive inmates have also been put under control and the staff involved undergoing investigation as ordered by the State Controller, Isa Sabo Kashuri.

While addressing the body of staff, the Controller once again reminded them of the far-reaching implications of smuggling prohibited items particularly mobile phones into custodial centres which, among other things, could lead to riot, jailbreak etc.

Kashuri said that the Nigerian Correctional Service Act, 2019 has made provisions for sanctioning anyone found culpable for the offence of trafficking. He therefore, admonished the personnel to shun such shameful act and concentrate on the task of character reformation for which they were employed. He however noted that the Service will not hesitate to show incorrigible elements the way out of the job if it becomes an option.

He commended the officer-charge of the custodial centre and the staff members for the excellent searching that prevented the item from entering the yard.

On their part , Bauchi State Police Command said that the attempt was made on Friday by the inmates but the situation has been put under control as normalcy has returned to the Custodian centre.

The PPRO, SP Ahmed Wakili said that “the command has sent reinforcement to the centre to ensure that there was no breakdown of law and order. People of the area and indeed Bauchi metropolis are now going about their legitimate businesses without hindrances.”

A visit to the Custodian Centre close to the Emir’s Palace showed the presence of heavily armed security personnel on sentry while the Bakaro road beside the Centre has been temporarily closed to traffic.