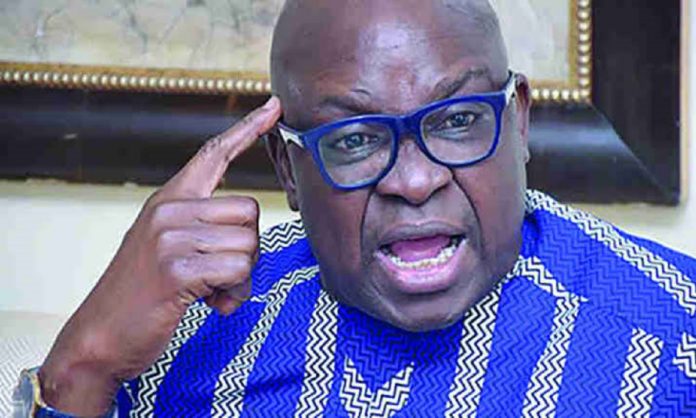 For a party that was at the helms of the affairs of the state barely two years ago, the current state of the Ekiti State chapter of the Peoples Democratic Party (PDP), in the eyes of most observers within and outside its fold, is nothing to be impressed about. The party was thrown into crisis following its 2018 election defeat by the All Progressives Congress (APC) at the gubernatorial poll. Its woes were compounded in 2019 when it failed to perform up to expectations in the national and state assemblies elections held across the state. Most of its candidates at the parliamentary elections were floored, contrary to expectations.

Today, the PDP in Ekiti is disunited, with two State Chairmen leading two separate state working committees, and pledging their loyalty to either Fayose or Olujimi. To many observers, as things stand today, hopes that the party can win the 2022 gubernatorial poll remain shaky. Speaking on the matter, Hon. Opeyemi Falegan, one of the founding party members of the PDP in Ekiti state, called for reconciliation among members of the two factions.

“What is needed within the PDP in the state now is a genuine and unbiased reconciliatory mechanism that will bring all together as members of the same family. PDP leaders across the board must strive to work together as an indefatigable and united entity to reclaim power from the APC during the 2022 governorship election in the state.

“The expression of fundamental human rights by the two factions within the party in the current tussle is, no doubt, an indication that members still believe in democracy. The party needs to be well repositioned than ever, especially in terms of leadership structure to further build members’ confidence and make it stronger. Members need to be convinced that the era of a winner takes all has been completely buried, while the interest of party members will be adequately protected, especially during the party’s primary elections in the nearest future,” he said.

And at a time when it seemed the brouhaha in the party was winding up, following interventions by the national leadership and other stakeholders, PDP in Ekiti State announced the suspension of a former House of Assembly member, Badejo Anifowose, for accepting an appointment from Governor Kayode Fayemi.

His action was viewed by the party as a gross misconduct. Expectedly, the two factions of the party in the State engaged in verbal war over the alleged suspension. Anifowose, a former ally of Fayose, had recently joined Olujimi’s faction. His suspension was announced by the Fayose faction.

In a statement by its Publicity Secretary, Raphael Adeyanju, titled, ‘Ekiti PDP suspends Olujimi’s ally for accepting Fayemi’s appointment’, Fayose’s group stated that the State Working Committee, had at an emergency meeting presided over by the chairman, Bisi Kolawole, on Monday approved the suspension following recommendations from Anifowose’s ward and local government executive of the PDP. He explained that the leadership of his Ikun Ward O1 in Moba Local government had set up a three member committee to investigate the allegations, but Anifowose refused to appear before it.

“The man belongs to a group that has been working with the APC government to destabilize our party. We have refrained from taking hard-liners’ step, because we believe he should be given a fair hearing. Anifowose was aware of the allegations against him, and the need to respond to same, but he deliberately failed to so. “The state working committee appraised the recommendations of the committee in line with the provision of section 57( 1) – (2),(4);58(1)and 59(1) of the PDP constitution ,approved the recommendation for the suspension of Anifowose, for gross misconduct, ” Adeyanju stated.

But the Publicity Secretary for the Olujimi faction, Sanya Adesua, said, “Anifowose is free to take up appointment to serve his state. In what capacity is the Bisi Kolawole group acting? Bisi kolawole has no right to suspend anybody”. In his reaction to the alleged suspension, Anifowose said, “I am not accountable to their faction. The party has two factions in Ekiti and the case is still court. So they are not in position to suspend me, they have no right. They don’t know me as a member of the party because I don’t belong to their faction.”

In spite of efforts to mend the cracks within its walls, the PDP in Ekiti remained polarised with Fayose and Olujimi leading the two warring groups. It was the unending crisis that made the National Working Committee (NWC) constitute a 7-man caretaker committee headed by Senator Hosea Agboola, for the running of the party’s affairs in the state earlier in the year. The Agbola-led committee was in charge of the party for 90 days. At the expiration of his assignment, the former senate Chief whip was optimistic that peace will return to the PDP in Ekiti.

“Since all the groups are preaching peace, it will soon be resolved. Fayose said we should look for peace; Olujimi said we should also look for peace. So, we are optimistic. The way politicians operate is quite different from the way people see them. The more you see, the less you know. With all you have read about Fayose, when we got to him, it was a different thing entirely. He believes that if wars that were fought with guns and bullet could be settled on the roundtable, he said that the misunderstanding within the party can also be resolved. We are not anticipating any issue,” he said.

But it turned out that Agboola and his team probably underestimated the enormity of the crisis. Last August, the crisis rocking the PDP im Ekiti state escalated following the conduct of parallel state congresses for the state working committee of the party. From the controversial congresses, a former commissioner for Environment, Honourable Bisi Kolawole emerged chairman from the Fayose’s camp, while the Olujimi group elected a former member of the House of Representatives, Honourable Kehinde Odebunmi as the state chairman of the opposition party in the state.

Fayose’s group held its congress, which was monitored by the national secretariat of the party and attended by former governor Segun Oni, at the Petim guest house in Ado Ekiti, Olujimi’s faction of the PDP were at the Lotus guest house, also in the state capital, to conduct their own congress. While the Uche Secondus-led NWC has given recognition to the Kolawole-led state working committee, the open support being enjoyed by the Odebunmi-led factional committee from the Governor of Oyo state, Seyi Makinde, who is the PDP leader in the southwest geo political zone, has further strengthened the crisis.

Rather than abate, the crisis had turned into a zonal problem with Fayose and Makinde battling for the control of the party in the southwest.  And as it is, the cracks is widening, following the open support of Lagos, Osun, Ogun, Ondo and Ekiti PDP state chairmen for Fayose and the vote of confidence recently passed in Makinde by the Southwest National Assembly caucus of the party. While the pro-Fayose camp accuses Makinde of supporting Olujimi’s faction in Ekiti state, the governor’s supporters claim Fayose is the problem of the party in the zone.

In an undisguised support for Fayose, the PDP chairmen in Lagos, Ondo, Ogun and Osun chapters accused Makinde of sidelining the party structures in the zone. The chairmen, in a joint letter to the National Chairman, Uche Secondus, accused Makinde of unilaterally calling zonal meetings without a recourse to the zonal executive committees of the party. Signatories included Deji Doherty (Lagos), Clement Faboyede (Ondo), Dr. Sikirulai Ogundele (Ogun) and Elder Sunday Akanfe (Osun). They also alleged that Makinde was rooting for Chief Olabode George and Sen. Hosea Agboola to become the national chairman and Southwest chairman of the party.