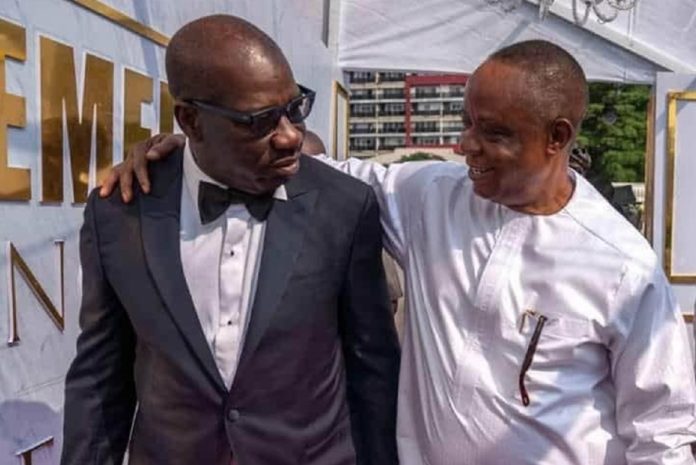 I have just finished reading a very brilliant and lucid intervention via the WhatsApp social media platform, titled: “Godwin Obaseki and Hosa Okunbo as brothers and friends”. The premise of the argument and the logic that ran through the entire gamut of the write-up could not be faulted, but the conclusion, even though, would appear to flow, as it were, from the premise, suffered from a material deficit: the mischief of context and time. I proceed to explicate.

Whereas, the logic of argument was difficult to fault, the writer engaged himself in a futile enterprise of seeking to call on all men of goodwill to prevail on the duo of Governor Obaseki and Benin-born billionaire businessman, Capt. Hosa to consider and embrace the path of reconciliation. While that would ordinarily appear to be a very good proposal, it is, in the circumstance of the lingering spat between them, tantamount to trying to lock the stable door after the horse had bolted.

While I concur that both Benin sons were friends and brothers before things fell apart, thus making it impossible for the centre to hold, I sincerely do not think, as things are now, that the proposal of reconciliation is feasible.  The context in which the writer and others who share his position are advancing the argument for reconciliation is in itself vitiated by the serial acts of bellicosity and belligerence exhibited in the last two years by Governor Obaseki against everyone he considered as his enemy, whether real or imagined.

Those who are now making a strong case for reconciliation, with some of them going as far as posting in the social media platforms pictures of Obaseki and Hosa holding each other in the spirit of camaraderie when the going was good, should have put themselves in the position of Capt. Hosa and others who had been at the receiving ends of Governor Obaseki’s orchestrated attacks on businesses and reputations that took decades to build.

It is axiomatic that power is a crazy aphrodisiac. It intoxicates and makes the wielder of it mad. The otherwise unassuming Obaseki, who appeared not to know his right from his left politically  as Chairman of the State Economy and Strategy Team under the administration of Comrade Adams Oshiomhole, lost his sense of equanimity and restraint.  He became as intolerant as he was impulsive in his disposition and attitude. All of a sudden, Obaseki was too eager to take on perceived enemies.

All gloves off, he had taken on Comrade Oshiomhole. One after the other, he took on the political gladiators that rallied behind him in 2016 to produce him as governor.  The first thing he did was a class attack: he demonized them as thieves who wanted him to share the state funds to them, even though he could not as yet pinpoint a single politician who had pressurized him to part with the state fund.  Not even now that he and his new party, the Peoples Democratic Party (PDP) have committed themselves to a mudslinging, dirty and debasing campaign.

It was in the context of the cloak-and-dagger political interactions in the All Progressives Congress (APC) that he ventured outside circumscription and limits of the political arena to ruffle the feathers of Capt. Hosa who was navigating his usual busines terrain. A rumour doing the round that the businessman was being pressurized to throw his hat in the ring for the governorship position was all that made the governor to throw tact, discretion and decorum to the wind.  He began his clandestine and behind-the-scene maneuvers to destroy the character and businesses of Capt. Hosa. Ordinarily, Capt. Hosa is a taciturn person who hardly talks until he is pushed to the wall. That he decided to publish a three-page open letter to President Muhammadu Buhari and the good people of Edo State to tell Governor Obaseki to leave him alone was the clearest indication that the Obaseki machinations and orchestrations against his person and businesses were more real than imagined.

Capt. Hosa has had to resort to media advertorials to debunk a series of salacious allegations, unsubstantiated claims and outright defamatory vituperations against him. While Governor Obaseki and his sponsored agents relished in   denigrating and demonizing Capt. Hosa, causing him psychological trauma, where were those who are now preaching reconciliation.  Assuming without conceding that reconciliation is in apple pie order, I pray, on what terms should it be consummated?

Pushing for reconciliation after the gloves were off in bare-knuckled fight to know who owns the land and cares for the people more than the other is a flawed enterprise which timing is ostensibly not fair to Capt. Hosa who is now in the fray with Governor Obaseki to defend his name, integrity, appeal and validation with the Edo people, especially in the Benin Kingdom where both of them come from.

Therefore, as much as I would have loved the duo to reconcile, that would have made more sense from the outset before the issues degenerated. I do not think Capt. Hosa, having been taken through the orchestrated embarrassment and humiliation, would be disposed to embrace reconciliation at this time.  The timing of the reconciliation being broached is wrong.  Perhaps, the best time reconciliation can work will be post-Edo governorship election after the election must have been won and lost.

From my reading, the issues in Edo State presently have gone beyond “brother and friend” which Governor Obaseki deployed in the salutation of his reply to Capt. Hosa’s open letter, published in six national newspapers on Monday, June 20, 2020. But it was clear that the governor was just being mischievous and clever by half.  In the context and content of the same missive, he approbated and reprobated.  How could he have threatened a “brother and friend” in the same letter that Capt. Hosa should be ready for the consequences of his choice (in apparent reference to Capt. Hosa’s perceived support for Pastor Osagie Ize-Iyamu), which to me is the whole essence of Capt. Hosa’s fundamental human right of choice and association?

Indeed, the governor had before now already begun to attack Capt Hosa’s business interests in a vicious plot to cut off the supply of earnings which he deploys in ministering to the economic needs of his kinsmen and women as well as the vast majority of Benin people both at home and in the Diaspora. Can such a person be considered to be a friend and a brother? Certainly not! What motivated Governor Obaseki to instruct his aide to issue a statement defaming Capt. Hosa on the same day that he published his three-page open letter,  urging President Buhari and Edo people to tell Obaseki to leave him alone? Certainly not friendship and brotherhood.

Significantly, Capt. Hosa has proceeded against the State Government in court for the libelous publication. Did those broaching the idea of reconciliation not see that act of provocation as something that matters to Capt. Hosa?  From the outset of his overt and covert onslaughts against Capt. Hosa, the governor and agents were enjoying their acts.  Whereas, it would have counted for something had the governor issued a statement to dissociate himself from the attacks. He cared less.

Perhaps he was working on the assumption that as someone who easily forgives, Capt. Hosa could be ambushed and railroaded into a reconciliation arrangement prelude to the election, but that will not work going by the extent to which the grudge fight has degenerated.  My take, really is that any reconciliation should be deferred to after the election otherwise, Capt. Hosa would be accused of betraying the good people of Edo State who have put their lives on the line without any solicitation to defend the integrity of this great Edo son.  This is the only Godly thing to do in this circumstance.