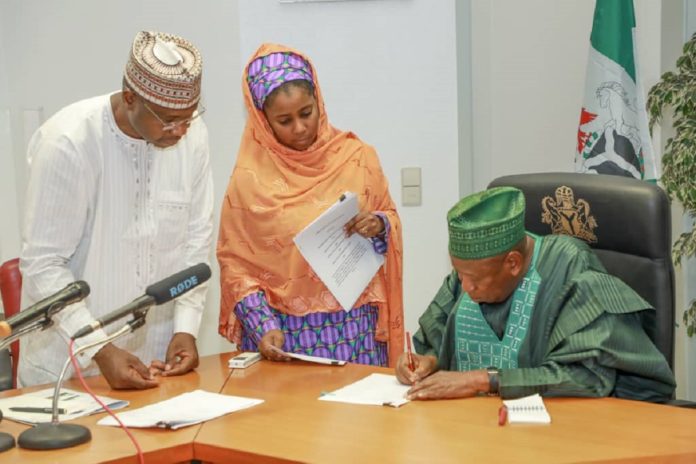 Kano state government has granted a plot of land for free, to the proposed Al – Istiqamah University in Sumaila local government area of the state, to facilitate the establishment of its Teaching Hospital.

The state governor, Dr. Abdullahi Umar Ganduje announced this when he paid an unscheduled visit to the university, founded by Alh. Sulaiman Abdurrahman Kawu Sumaila, a former member of the National Assembly.

According to Dr. Ganduje, “the move is to support the university management towards successful take off of the project. We are duty bound to make available incentives to investors willing to invest in the state, for economic and social development”.

“We are particularly desirous of supporting investment in the sector of education, especially tertiary education because we need more of such institutions to accommodate products of our free and compulsory primary and secondary education policy”, he added.

He praised the founder, Alh. Kawu Sumaila for what he described as the first indigenous private university in the state, saying such investment was a unique opportunity for life – long learning and self reliance.

“We are highly pleased that you have made such an investment. We will support you and the state government would partner with this institution to train our children and to render services to Sumaila community and the state as a whole”, Gov. Ganduje asserted.

Conducting the governor round the complex, Alh. Kawu Sumaila explained that he decided to embark on the project outside the state capital, to give more opportunity to teeming students especially those from Kano, opportunity to acquire quality education in a serene environment.

“It will also provide an avenue for many who students who cannot be admitted by other universities due to space limitation”, he stated, adding that at inception, the proposed university would concentrate on offering degrees in sundry health sciences and allied fields.

Alh. Kawu Sumaila stated that an implementation committee for the university has long been set up while all the conditions set by the National Universities Commission for the setting up of private universities have been met.

“Presently, we are waiting for the NUC to come for final visitation on the 28th of next month and we hope that as soon as they grant us approval, we shall take off”, he maintained, adding that the implementation committee for the university has made the required arrangement for putting in place the university management, as required by law.

The university founder explained that most of the major university infrastructure such as laboratories, lecture halls, ICT center, Entrepreneurship Center, administrative building, library as well as two out of the five proposed female and male hostels has been completed to allow for academic activities to commence this year.

Gov. Ganduje Condole With the Family of Mahmoud Gaya