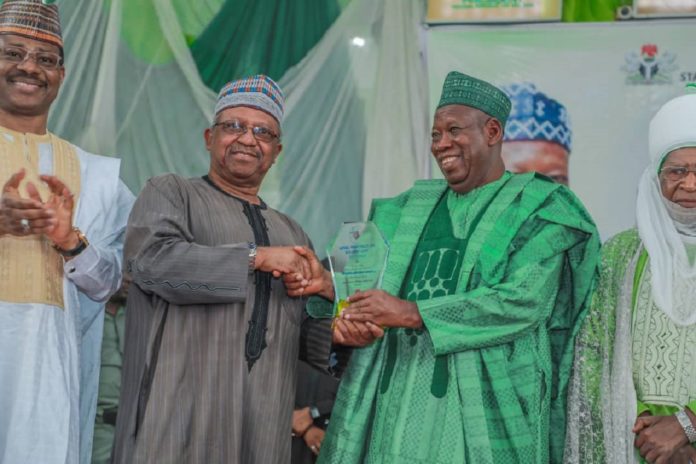 Exactly 27 years after an Award for “Champion of Primary Health Care” was given, similar Award was given to governor Abdullahi Umar Ganduje of Kano state, for his continued effort in the development of primary healthcare system in the state, and institutional strengthening replicating global best practice.

Before the Award was given to the governor by the Minister of Health, Dr Osagie Emmanuel Enahire, the Executive Director of the National Primary Health Care Development Agency (NPHCDA), Dr Faisal Shu’aib disclosed that, “The last time such Award was given, was for the last 27 years. Here we are Awarding Governor Abdullahi Umar Ganduje with it, Champion of Primary Health Care.”

The Award was given at Kano 2020 Primary Health Care Summit, that was held at Coronation Hall, Government House, Kano, Tuesday.

As preamble to the presentation of the Award, Dr Shu’aib said “We looked at the quality leadership that gave birth to effective and efficient primary health care delivery system, with good budgetary provision to the sub-sector and good management, before we arrived at the winner of the Award.”

He added that the incredible leadership demonstrated by the governor, in his un-tiring effort in developing primary health care in the state, which culminated into making other state to copy from Kano, was another reason why the governor exhibited multi-faceted feats being achieved in the health care sector.

Expressing his delight and that of the Ministry of Health, during the presentation of the Award to the governor, the Minister said the rate at which Kano is moving in the development of the primary health care system, is encouraging and superb.

Unveiling the process that led to the emergence of Ganduje as the Champion of Primary Health Care in the country, Minister Enahire reveals that, “We at the Ministry, we are united in arriving at the decision that led to the Award of this merit to His Excellency Governor Abdullahi Ganduje.”

Explaining that, all the indices used before they arrived at this level, were scientifically proven, that they all appreciated the immense contributions of the governor in the area mentioned, primary health care delivery system.

When declaring the Summit opened, the Minister stated that because of his unassuming belief and acceptance of the efforts being put by the governor in the health sector generally, he mentioned that, “This is my third coming to Kano in less than a Month. This, signifies that, Kano is doing well in the sector. Because I cannot just be coming without being satisfied that the governor is doing very well.”

Dr Enahire argued that, Kano state under Ganduje understands the importance of health sector and not at the detriment of other sectors of the state, “Because we have been following trends and see for ourselves. Dr Ganduje is that governor who believes in healthy society. And who works towards improving same.”

In the continuation of his remarks the Executive Director NPHCDA, Dr Shu’aib, he reminded how Kano state under governor Gaduje fought Polio incessantly and unrelentedly, “…since when the governor was a Deputy Governor. Kano state and the nation in general, would not forget your efforts towards that,” he said.

“While His Excellency the governor came up with the idea of Health Care Influencers, as another strategy to strengthen primary health care delivery system, it is on record that, other states see wisdom in the style. It is known to all that, the governor is doing extremely amazing things in this sector,” he argued.

According to him, the women participation as Influencers is another way of helping the primary health care sector become more entrenched and with more grassroot support, where sense of ownership would be achieved.

In his remarks, the governor said “This Summit heralds a milestone in the health sector, particularly primary health care delivery in the state. We all believe that the welfare of our people from the grassroot is another cornerstone.”

Adding that, the state is putting good resources towards achieving effective and efficient primary health care delivery system in the state.

Immediately after the opening ceremony of the Summit, the Minister was taken to the State Cancer Centre, which is under construction, which the Vice President Prof, Yemi Osinbajo laid its foundation few weeks back. He inspected the project.

Before the inspection of the project, he had brief interaction with some women, who were over 500, that were taken to the nearby Muhammadu Buhari Specialist Hospital, a few meters away from the Cancer Centre, for free Cancer screening. To mark the Year 2020 World Cancer Day.