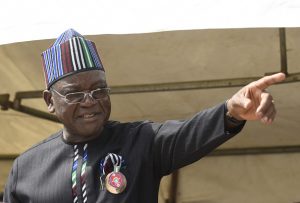 In a dogged fight against crime in Benue State, the Police Command today, paraded six serial killers who were arrested in connection with the killing of 16 persons in Ushongo Local Government Area of Benue state.

Briefing newsmen in his office at the  command’s headquarters in Makurdi, the state Commissioner of Police, Garba Mukaddas told newsmen that the gang killed the 16 victims, buried their corpses in shallow graves and planted cassava on the graves as a way of covering the crime.

According the Police Commissioner, intelligence was gathered that a kidnap/Robbery gang operates within Ushongo Local Government Area of Benue State.

“Upon receipt of this information a crack squad was deployed to the area for investigation. On 21/09/2019 at about 1630hrs, the gang leader, one Iorwuese Ikpila, and five other suspects of Mbagwaza council ward, Ushongo were arrested in connection with the case.

He said on interrogation, the suspects confessed that they have been armed robbers operating within zone ukum, kwande, Kastina-Ala and Ushongo Local Government Area who opted for kidnapping as a result of tight deployment of security operatives on the high ways.

“They specified that the gang kidnapped 16 persons, robbed them of their vehicles, motorcycles and other belongings, killed their victims, buried the corpses and planted cassava on the graves as a way of covering the crime.”

He therefore confirmed that 11 corpses have been exhumed and identified by their family members while a receiver of the properties stolen by this gang; one Shizoon Nyityo of Zaki-Biam has also been arrested.

Speaking to newsmen, the gang leader, Iorwuese Ikpila a.k.a Dr kwagh-a-korum menenge, “Let something catch me let me see”, confessed to the crimes saying he now knows that his name is fake and that he has come to the end of the road.

He said his father was a native doctor and he worked with him and many spirits. According to him, when his father died, he wanted  to acquire more powers and become more influential than his father. It was in the quest for more powers that he and his gang went into kidnapping and killings to get blood as requested by a certain spirit, whom he referred to as “the queen”, for the rituals.

“We needed power to acquire anything we wanted and the queen asked us to bring 20 people so that she can use their blood. We have only gotten 16 when we were arressted.

Asked if he regrets his actions, Ikpila said “Nothing pass God. I have confessed when I was arrested before I took them to where I burried them. I regret my actions”.

When Ikpila and his gang were arrested, one locally made single barrel gun, a rope used to strangulate their victims and assorted charms were recovered on them.

The CP had stated that beteeen September 21st to 27th, the Command arrested a total number of 40 persons in connection with armed robbery and kidnap cases, recovered 21 arms, 17 live ammunition and 12 cartridges.

He said the police employed numerous strategies to prevent crime and apprehend criminals ranging from deployment of well trained personnel to strategic places where crime is prevalent, constant patrols within the Metropolis, mapping out flash points for effective posting of officers among other.

Mukaddas who noted that the briefing was organized to keep the general public abreast with the activities of the command, said eight kidnap/robbery cases had been charged to court for investigation.

He appreciated other security agencies, traditional rulers, religious leaders and the Benue people for their immense support and cooperation and for giving out useful information to the police during this period.

“I assure you that we will not relent in our effort to fight crime and by the grace of Almighty God; Benue State will be rid of criminal elements”, he added.

Meanwhile, Benus state Governor Samuel Ortom has  condemned the act describibg it as a horror.

Ortom who spoke to ewsmen in Ushongo shortly after inspecting the site of the incident, on Thursday stated that the height of criminality will not be tolerated in the State.

“Seven have been arrested so far. Four are still at a large. We will get to the root of kidnapping in the State. They will be fished out to face the law. All kidnappers in flash point local government areas including, Vandeikya, Logo, Ukum, Kwande and Katsina-Ala will be apprehended.

“It is time up for criminals in the State. Imagine that some persons have been missing for more than three years and in some instances, ransom was paid by their relatives yet they were murdered by these persons whose motives is to make quick money.

“Not even the best lawyer in the country can save them now. I urge Benue indigenes to give information to security agencies to eliminate this”, Ortom appealed