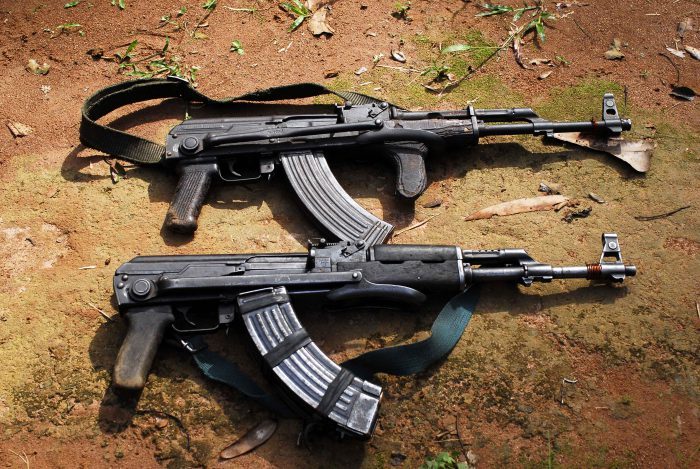 The Police Command in Anambra on Tuesday told an Anambra Magistrate Court, Ogidi District that an AK 47 rifle and about 90 rounds of ammunition snatched from an operative by some youths in Obosi, Idemili North council area were still at large.

Police prosecutor attached to Federal Special Anti-Robbery Squad (F-SARS) Awkuzu, Inspector Everest Chike, said this at the hearing of motion on notice to allow the police detain the suspects arrested in connection with the crime.

Chike prayed the court to allow the police keep the suspects in their custody as it would enable them trace the items to their ring leader who was still at large.

“Respondents to be remanded in police custody at SARS Awkuzu within thirty days pending conclusion of police investigation and arrest of their gang members and recovery of police rifles/ammunition and recovery of other robbed items.

“That the police are ready and willing to lead the police investigation to the houses and hideout of their gang leader now at large.

“That it will serve the interest of justice for the honourable court to grant this application to remand the defendants in cell at SARS office, Awkuzu within 60 days to enable the applicant to recover the robbed police AK 47 and its ammunition,” he said.

Challenging the motion, P.A Oseme Esq., counsel to the defendants, argued that it should be struck out on the grounds that the applicant did not fill a requisite remand form and therefore should not remand the accused persons.

Oseme cited an authority which said that an accused person cannot be detained beyond 48 hours and within the 48 hours should be charged to court.

He said the accused has been in detention for more than one month and prayed the court to grant them bail and be properly charged.

The Chief Magistrate G.C Nwabachili adjourned sitting on the matter to Aug. 14 for ruling on the motion.

A source, who pleaded anonymity, said two youths attacked a police officer in Obosi and carted away his AK47 riffle and ammunition after inflicting serious injuries on him with machetes and other dangerous weapons.

The source, who expressed worries at the level of insecurity and cultism in Obosi, said the youths may have taken possession of the arms to execute the current battle for supremacy among cult groups in the area.

The suspects were not brought to court.