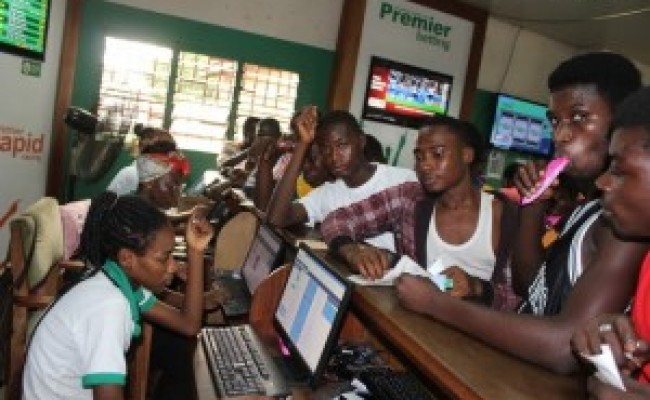 Unknown gunmen have robbed a gaming house in Aba, Abia State, carting away an undisclosed sum of money.

Eyewitnesses said the robbers numbering about four had stormed the gaming house located few metres away from a military unit along Asa Road by St Michael’s Road, at about 6pm.

The robbers were  said to have came on  a tricycle and shot sporadically in the air as passersby fled to safety.

They shot a worker in the gaming house on the leg as he tried to stop one of them from making his escape after the robbery.

It was also gathered that the robbers later raided most of the phone shops at St. Michael’s Road and made away with phones using polythene bags.

A phone dealer at St. Michael’s road who pleaded anonymity, said, “”I saw a young man in the pool of his blood yesterday after that robbery. He was shot after grabbing one of the robbers, but couldn’t get help from anybody until one of the robber came to rescue him by shooting the young man on the leg.  It was later after the robbery that he was taken to the police clinic at Aba Area Command.”

Another eyewitness who gave his name as John urged the Abia State government to re-establish a vigilante group in the city.

“This was exactly what he was experiencing from the early and late 90s before the state government took a bold step to establish the Abia State Vigilante Group a.k.a Bakassi which helped to solve the problem. From what we are seeing now, the soldiers here in Aba are no longer interested in their jobs.  The gaming house is located a few poles to the military unit, yet they failed to act when they heard gunshots. They only stay at their units and deploy small boys to be collecting money from motorists.”

The phone dealers urged Gov. Okezie Ikpeazu and the State Commissioner of Police, Ene Okon to make haste to curb the spate of robbers using tricycles in broad daylight attacks in Aba.