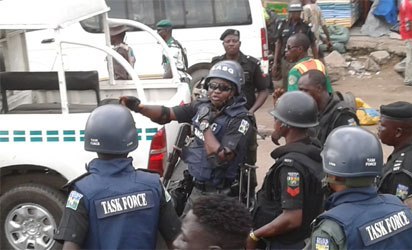 Operatives of the Lagos State Task Force on Environmental Sanitation and Special Offences has nabbed a notorious criminal for robbery and pick-pocketing in Lagos.

CSP Olayinka Egbeyemi, Chairman of the Task Force, in a statement, said that the suspect was nabbed on Saturday at ‘Costain Bridge’ in Surulere by the ‘Enforcement and Monitoring’ patrol team of the Agency.

Egbeyemi said that preliminary investigation revealed that the suspect was a ring leader of a four-man criminal gang that  specialised in picking pockets and robbing the public of their valuables such as phones, wallets and jewelleries, using a commercial bus.

“The suspect and three others, who are presently at large, were nabbed after they jumped down from a commercial bus on top of Costain Bridge immediately they suspected that a patrol team of the Agency was chasing them right from Ojuelegba.

“There has been series of complaints by commuters on activities of these criminals using commercial bus to rob victims of their valuables and that was what prompted officers of the Agency to embark on regular patrol of every nooks and crannies of the state,” he said.

The chairman said that operatives of the agency and other security agencies across the state would not relent in curbing criminal activities being perpetrated by miscreants and hoodlums across the state.

Egbeyemi said that the Lagos State Commissioner of Police,  CP Zubairu Muazu, had directed that the suspect be charged to court for prosecution.

“The suspect confessed during interrogation that he started as a bus conductor 15 years ago before becoming a notorious pick-pocket.

“He confessed further that he and his criminal gang had operated at different parts of the State which included Oshodi to Mile 2, Obalende, Pen-cinema, Agege, Ojota and Ikorodu Road and that any passenger who refused to cooperate with them were beaten and thrown out of their commercial bus on top speed.

“We have been in this robbery and pick-pocketing business for long as we dispossessed our passengers of their valuables such as wallets, jewelleries including phones which we sold as fairly used to the public.

“The suspect also claimed they were making N80,000 to N100,000 everyday after selling their stolen phones and other valuables,” he added.

He urged members of the public to always report any illegal and criminal activities around them to relevant law enforcement agencies.