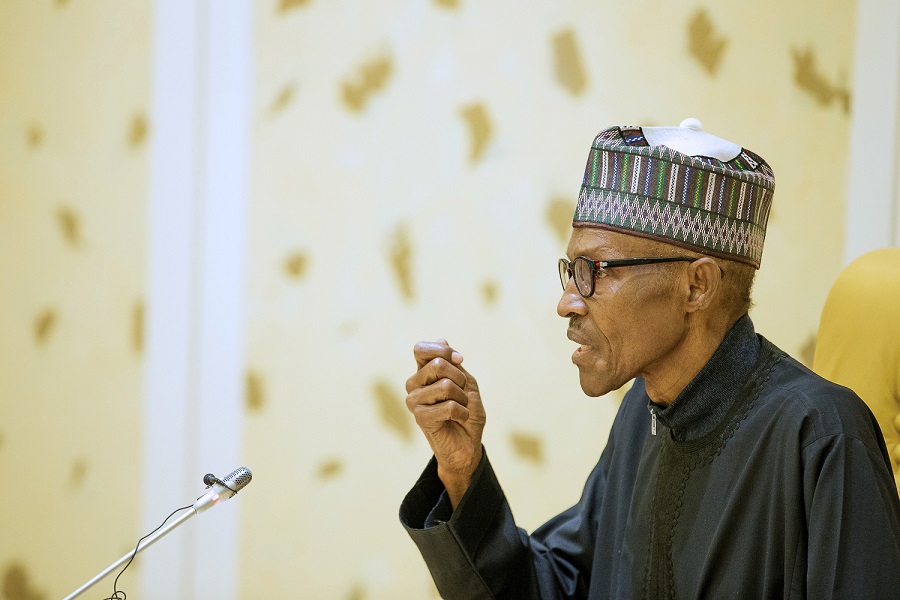 The United Nations will live in infamy for lending its megaphone on Tuesday, September 19, 2017, to Nigeria’s elected military dictator Muhammadu Buhari.

Loading ...
The Hausa-Fulani Muslim strongman is currently orchestrating genocide as defined by the Genocide Convention against Nigeria’s 50 million Igbo people because of their ethnicity and unwavering devotion to Christianity. Buhari’s genocide marks the culmination of a long train of Biafran subjugation by radical Hausa-Fulani Islamic terrorists. The dictator’s power is anchored to an illegitimate constitution decreed by a military dictator in 1999 to hold the Christian Biafran people in bondage to Hausa-Fulani Muslims. Nigeria’s constitution has never been approved by Nigerians.
Last June, Buhari tacitly endorsed a Hausa-Fulani threat to expel by force and violence and to plunder 11 million Igbos in twelve northern Nigerian states that have adopted Sharia as their legal codes if they did not abandon their Igbo homes and businesses by October 1, 2017. During the past few years in northern Nigeria, Hausa-Fulani terrorists have destroyed thousands of churches and religious schools and displaced millions of Christian Biafrans.
Hundreds of innocent civilians have died and more have been injured or terrorized by Nigeria’s military acting under Buhari’s direction in the last week alone. A courageous and influential Biafran leader, Nnamdi Kanu, has had his home attacked and quarantined by Nigeria’s armed forces and his followers killed. Grisly videos and photos taken at scenes of the harrowing crimes are conclusive. What they prove amounts to state terrorism—the systematic employment of violence to intimidate or coerce a civilian population.
Instead of providing Buhari a megaphone, the United Nations should be expelling Nigeria from membership under Article 6 of the United Nations Charter. The United Nations Security Council (UNSC) should be referring the dictator and his henchmen like Army Chief of Staff Lt. General Tukur Yusuf Buratai to the Chief Prosecutor of the International Criminal Court, Fatou Bensouda, to investigate for complicity in genocide. The UNSC should also be imposing an arms embargo on Nigeria under Chapter VII of the United Nations Charter until the right of the Biafran people to self-determination is secured through a free and fair referendum conducted by the United Nations Electoral Unit. At present, dictator Buhari is diverting arms purchased for ostensible use against Boko Haram, an international terrorist organization, to the terrorizing of Biafran Christians. Buhari has no interest in defeating Boko Haram because its threat triggers military and financial assistance from the United States in its global war on terrorism.
These sanctions against Nigeria would honor twin objectives of the United Nations: (1) “to establish conditions under which justice and respect for the obligations arising from treaties and other sources of international law can be maintained;” and, (2) “promoting and encouraging respect for human rights and fundamental freedoms for all without distinction as to…religion.”
The genocide of Biafrans is not a “domestic” matter within the exclusive jurisdiction of Nigeria. Genocide is a crime against all of mankind which concerns every country. Moreover, if dictator Buhari is permitted to kill and enslave Christian Biafrans with impunity, Nigeria could degenerate into a Hausa-Fulani Islamic theocracy and could become a state sponsor of terrorism. Nigeria’s example would embolden the persecution of Christians elsewhere.
Nigeria’s 190 million inhabitants make it the most populous nation in Africa. It is a model not only in West Africa but throughout the continent. It is too important for its fate to be left to the roll of the dice.
The international community planted the seeds of contemporary Nigerian and African strife by arbitrarily carving up the continent in favor of colonial powers at the1884-1885 Berlin Conference. The United Nations is saddled with a moral obligation to help remedy the dystopias spawned by many of its key members.
While the suffering and persecution of Burma’s Muslim Rohingya have captured headlines and the attention of the United Nations High Commissioner on Human Rights, Zeid Ra’ad al-Hussein, Nigeria’s far worse oppression of Biafrans has been largely ignored. It is difficult to resist the conclusion that the international human rights community squints when blacks kill blacks.