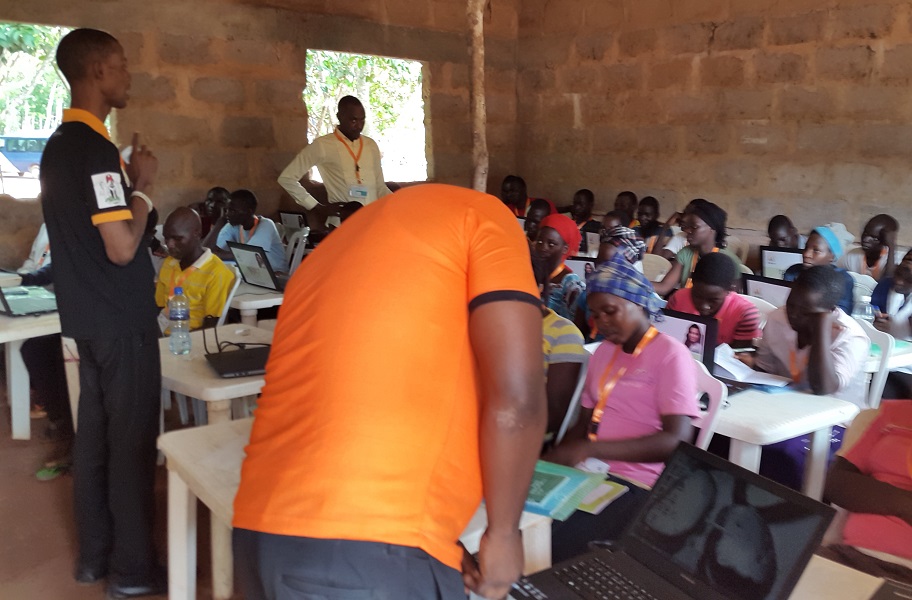 Until early 2015, not much was known about Internally Displaced Persons (IDPs’) camp of Christian Home for the Needy, a home for orphans, destitute and homeless, founded in 1992 by the International Christian Centre for Missions (ICCM). Located at No. 45, Umamwen Street at Uhogua in Ovia North East Local Government Area of Edo State, Sebastine Ebhuomhan visited the camp, again, to feel the pulse of persons there and reports.

An Internally Displaced Persons’ (IDPs) camp is not a place of bread and butter or luxury and comfort for a citizen.

While it serves what it is meant to be in serious countries: a place of temporary resettlement with available human necessities, it is not the same in Nigeria, where reports, pictures and videos of hungry, poverty-stricken, malnourished, sick and dying children and adults daily assail unshakable sensibilities of governments and citizens.

In many instances, authorities and coordinators of such camps are openly accused of fleecing, stealing and enriching themselves, friends and cronies with cash, foods, consumables and other necessities donated to camp members by the public, and thereafter, watch the supposed beneficiaries dying silently of hunger, disease and poverty.

For example, the degeneration of national security occasioned by the terrorist activities of Boko Haram, which resulted to death, dismemberment, dislocation and displacement of families and individuals in Nigeria’s North East region and other places also resulted in no little way to the high number of people in IDP camps across the country with a concomitant poor living standards.

Things appear to be changing in the past weeks after the Federal Government initiated the Special Relief Intervention, through which grains and other necessities are now being distributed directly to IDPs instead of the old system of distributing them through camp authorities, who often stole the foods. The change, according to presidential spokesman, Laolu Akande, followed the discovery that about 50 trucks of foods and consumables of every 100 loaded trucks were usually diverted by camp authorities in North East.

For the management of Internally Displaced Persons (IDPs) camp of Christian Home for the Needy, a home for orphans, destitute and the homeless, founded by International Christian Centre for Missions (ICCM) at Umamwen Street in Uhogua, an agrarian community in Ovia North East Local Government Area of Edo State, the hallmark of good and sincere managers is the ability to make best use of scarce resources for improving the lives of children and adults, especially girls and women.

At the last count, not less than two lawyers beside graduates in other disciplines such as teaching etc. have been produced from the camp at a time living, feeding and education are far-fetched in other IDPs’ camps in the country. According to the camp founder and coordinator, Pastor Solomon Folorunsho, training, education and moulding of IDPs’ character are the right things to do.

“Pure religion, the Bible says in the book of James, is to care for the widow and the fatherless. We just felt this is the right thing to do,” Folorunsho, who began his ministry way back in 1991 and his orphanage a year later, states.

Asked in an interview where the graduates go after education and training, he replies, “You can see some of them here. They are working here. Some of them are teaching in the school here. For example, one of the persons that are in charge of receiving guests here is a lawyer. She is one of them. Then, there is another one that was just called to the Bar.”

Indeed, the camp’s success is one that even Edo State government contributed and bought into, culminating in the announcement of a job for one of the graduates of the camp. The announcement was made when the camp management visited Government House after Governor Godwin Obaseki and Deputy Governor Philip Shaibu and their wives had visited the camp before and after election and, particularly, celebrated the last Christmas with children and adults there.

It was gathered that in some cases, families that never identified with their homeless or destitute members, surreptitiously turn up to identify with them after their lives were turned around in the camp.

Folorunsho confirms, “We have had that challenge too. You know, some families, when they hear that the person is now a graduate, it is then you see one uncle or brother coming. But our intention is not to take the person away from their family. So, if there is families that feel their child was well taken care of or something like that and they now want to realign with the child that is fine.”

The ICCM IDPs camp in Uhogua might have grown to become a camp that moulds orphans and homeless children, making them graduates and responsible citizens, it was never a smooth sail for the gently talking clergy when he began his humanitarian work.

With a population of about 2, 000 persons including management members and IDPs, made up mostly of Christians from Borno and Adamawa states, from which 400 children were returned recently, parents of children in the camp were drawn mostly from: Church of Christ in Nigeria (COCIN), Evangelical Church of West Africa (ECWA), EYN, Baptist Church, Redeemed Christian Church of God (RCCG), Catholic Church, Church of God Mission (CGM), Deeper Life Bible Church etc. when they were alive.

Folorunsho explains, “We started our ministry in January 1991. In 1992, we decided that as we are doing God’s work, as we are seeing destitute, seeing widows, seeing people displaced by one thing or the other, poor people, orphans, children from broken homes and street children, we just felt it was right to do as the Bible tells us that God so loved the world that he gave his only begotten son.”

“So, what can we give to these people, if we really love them? And the Bible says that we should love our neighbour as ourselves. If we don’t love the neighbour we see, how can we say we love the God that we don’t see?”

“Again, Jesus was saying, I was sick, you did not visit me. I was hungry, you did not feed me. I was naked, you didn’t clothe me. We feel that these people are created in God’s image like us. We are not better than them. The circumstance and conditions they found themselves brought them to where they are.”

“The best way we can appreciate God for what he is doing in our lives is how we demonstrate our appreciation by supplying the needs of the needy,” he states.

Casting his mind further back to his humble beginning, Folorunsho says there was a time he owed private schools fees in the bid to give good education to the children, a situation that forced him to establish the camp’s nursery, primary and secondary schools.

He further explains, “Like I earlier said, as we move around, and travel to villages to preach to different places, you find children that either their mother or father is dead or the home is broken: the father has gone to marry another woman and they don’t want the child at home; or may be, they confessed the child to be a witch or one thing or the other and the whole family decides to pursue them. That was how we were getting those children we were training.”

“We brought them; we rented a place for them and put them all in private schools. We wanted them to see that they were important. At that time, before this present government came, public schools were not the right place for learning. So, they were all attending private schools, and the children were feeling like big men’s children.”

“It got to a time, the children were becoming many; and we were not having much money to pay for them. At some point, we owed more than N700, 000 in school fees because private school fees are always increasing. So, we decided that we should set up our school. We established Christ-like Schools.”

“Moreover, we didn’t start here. We were in the city. We were there for years before we bought this place and relocated. We had rented apartment in the city. This is how we were doing it until we felt like establishing our schools that they now attend free-of-charge so that we can use donations and other funds for other things. For your information, we have produced graduates with first degrees and master degrees,” Pastor Folorunsho declares.

On what motivated him to establish his ministry and humanitarian work, the pastor says it was neither monetary gains nor material benefits.

“Our belief is that if somebody is suffering, and you use that suffering to enrich yourself, you have automatically transferred that suffering to yourself. We have our work that we do. We are pastors; we are missionaries. We have members. Financially, they take care of us. That is how we have been living. That is even where we got enough to be able to start what we started here.”

If church members take care of their pastor’s needs, do they also take care of the mountain of needs of thousands of displaced persons in camp? Pastor Folorunsho explains how he funds activities of the camp as he thanks all individuals and groups that contribute to give life and love to the IDPs.

“It comes from donations. Donations made by individuals; churches, Moslem groups, NGOs, different people, universities, schools (both public and private schools) and then, the government; in addition to what the government does.”

“Like Customs, for example, they have brought food items, cloths, goods and oil. They said it was an order given by the Presidency. Then there is Edo State government. NEMA has also done a lot. They brought food items. They’ve given us a tent. Most of the funding comes from donors. We want to use this medium to thank all our donors who have made this place a success.”

Indeed, the more gifts the children get the better their lives and those of us. After all, it is often said that givers never lack!

On allegation of child sale in the camp, Pastor Folorunsho says it is impossible for him to do a crime like that and go scot-free.

“No baby can be sold here. We don’t even allow child adoption. We have collaboration with the Ministry of Women Affairs. People normally bring letters the Ministry of Women Affairs gave them to come and see if we have adoptable children. The reason we rule this out is that I’m always concerned about what people will do to those children. From the bottom of my heart, I’ll say we have never given any child to anybody. If anybody says we have, the person should come out; prove it; bring the child; and let them hold me responsible.”

On what the future holds for the IDPs, Pastor Folorunsho, who demarcates his mission clearly from politics, says, he will continue to nurture street kids to greatness.

“With what I have seen so far, I know great things are going to come out from the lives of these children. This place is originally a church with an NGO that cares for the needy. We will continue to fulfil the mission of this place.”