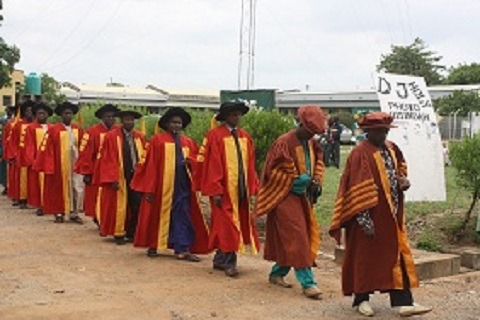 President of COEASU, Emmanuel Asagha said the union decided to give the federal government three (3) months to enable it meet up with their demands but added that the lecturers will continue the strike should the government renege from its commitment.Speaking after a closed door meeting with the two ministers of education, Mallam Ibrahim Shekarau and Barr Nyesom Wike in Abuja, COEASU boss said, “We want to give the new minister the benefit of doubt, he mentioned God a number of times while pledging his commitment to us, and we believe that he is committed to resolving the remaining issues.“Definitely, the strike will be suspended for a period of 3months, as it has been emphasised by the minister that the issues at stake will be resolved in a shortest possible time, we cannot just leave it open and call off, a period of 3months is reasonable enough for them to prove their commitment. By Monday next week the strike will be suspended to allow students go back to school.“But if government reneges after the 3months, the public will hear the true story again but we are believing that given what the minister said, with the cooperation of the Mr President, they will see how they can sort out the whole issues and from what we have seen, the minister is very committed but if federal government do otherwise at the end of this 3months, we will equally do otherwise”, he assured.Asagha said all striking lecturers will be directed to resume work effective from Monday next.Recall that the Chairman, Committee of Council Chairmen of Federal Colleges of Education, Senator Emmanuel Anosike, on Tuesday held the truce meeting with COEASU at the National Commission for Colleges of Education (NCCE) as the lecturers meet to review the nationwide strike.All the stakeholders at the meeting later agreed that the on-going industrial action by the union has been prolonged.COEASU leadership and all other unions in the sector who were present at the meeting called at the instance of the Minister, Mal. Shekarau  said government has met a reasonable number of the union’s demands and that Government appears determined to address the unresolved issues hence the need to suspend the strike.The union agreed to call off the strike in principle subject to the following, that there shall be no victimisation on the basis of the strike, salaries so withheld be released on bulk; secular on the implementation should be released while asking the government to set up a technical committee to look into other pending issues.It would be recalled that COEASU, embarked on the indefinite strike over grievances relating to government’s failure to release the white paper of visitation panel it undertook two years ago among many other contending issues.Earlier, the Education Minister, Shekarau assured that issues raised by the union which includes salary harmonisation under CONTISS structure as well as disparity in the civil service system, especially between degree programmes and other technical based degrees churned out from the Polytechnics and Colleges of Education will all be taken care.