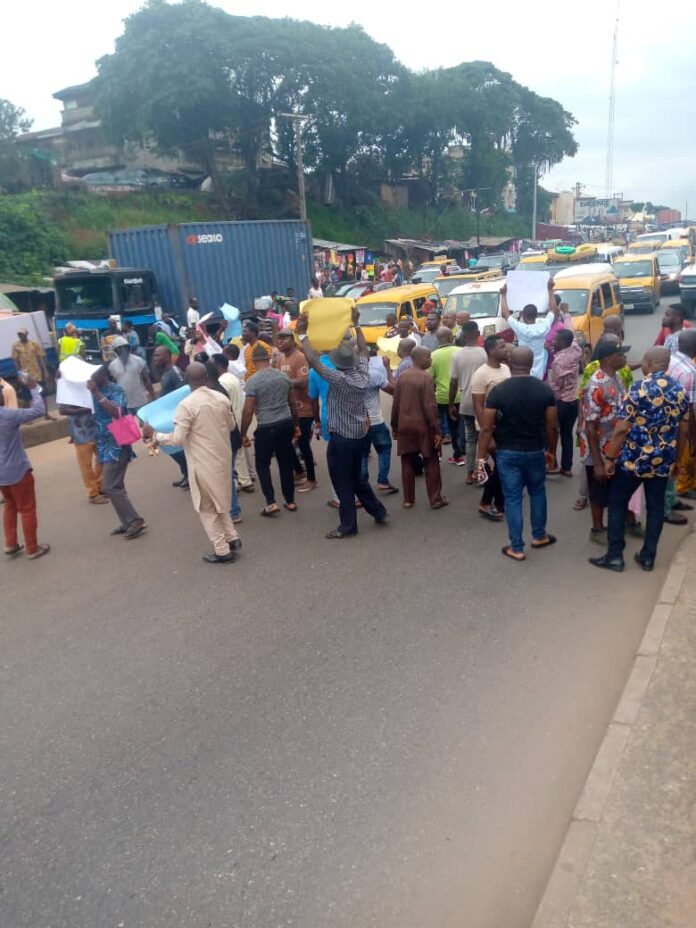 By Chuks Eke
Shop owners/allottees of shops at the New Auto Spare Parts market, Nkpor in Idemili North Local Government Area of Anambra state have petitioned the Assistant Inspector-General, AIG in charge of Zone 13, Ukpo, Anambra state, alleging acts of violence, thuggery, attempted murder and breach of peace against the Chief Elisius Umeozokwere-led executive committee of the market.
The petition is coming barely few days after a peaceful protest embarked upon by some aggrieved traders at the market against a concluded arrangement by the
Umeozokwere-led executive committee to build new shops on top of the existing ones in the market, allegedly turned bloody.
In the strongly worded petition written on their behalf by their solicitors, the shop owners/allottees, Paul Emerah, Umekwe Mbanefo, Ofoleh Obiorah, Edwin Ibeabuchi, Emma Ukoh, Joseph Nwobodo, Peter Nwahiri, Barth Omile, Cornelius Odunze, Polycarp Dike and Basil Obodoechina alleged that the Umeozokwere-led executive had suddenly embarked on the construction of new shops on top of the existing ones, without proper consultations with them as shop owners and allottees in the market.
In the petition signed by C. M. Oluigbo Esq. from the chambers of Afuba, Anaenugwu, Obi and Partners, the petitioners pleaded with the AIG to carry out discrete investigations into the violent activities of Umeozokwere and his executive members in the market, with a view to calling them to order so as to forestall further break down of law and order being brewed by their continuous acts of erecting shops on top of their own shops, under the protection of armed thugs.
They also pleaded with the AIG to use his good offices to stop Umeozokwere-led executive from further construction work inside the market, to forestall serious breakdown of law and order in the market and its environs.
They insisted that the mayhem caused by Umeozokwere and his executive in the market had created so much fear among the traders so much so that the shop owners locked up their shops out of fear on the fateful day when the aggrieved traders embarked on the protest to stop building shops on top of existing ones.
They recalled that they had earlier obtained a motion for interlocutory injunction from a High Court restraining Umeozokwere and his executive members from further erecting shops on top of their own existing shops, adding that they are currently at the Court of Appeal in Awka challenging the judgement of a High Court which dismissed their suit to stop work.
They described as horrific, the manner with which the Umeozokwere executive launched a violent attack on the shop owners during the recent peaceful protest they embarked upon at the market.
They recalled that during the protest, which started when the traders saw building materials being brought into the market, in defiance of the subsisting court injunction, the executive unleashed thugs and vigilante operatives against the protesters, which resulted in Cornelius Odunze, John Okafor and other traders with some journalists covering the protest sustaining various degrees of injuries with the journalists losing their cameras, phones and other personal effects, while Obiorah Ofoleh had a dislocation on his shoulders after falling into the drainage to escape gun shots aimed at him by the trigger-happy vigilante operatives working for Umeozokwere executive.
However, Vice Chairman of Nkpor New Auto Spare Parts Dealers Association, Ikechukwu Onyegbu and the Financial Secretary, Chief Alexander Orji who spoke on behalf the Chairman, Elisius Umeozokwere, had described the protest as handiwork of opposition perpetrated by enemies of progress who lost election of the association, adding that there was never any iota of violence inside the market as all the traders were busy doing their legitimate businesses.
Onyegbu and Orji disclosed that the opposition had earlier gone to court against the market executive and lost and are now in Appeal Court, adding that in delivering his judgement, the presiding Judge of the High Court, Justice Pete Obiorah had vacated the interim injunction restraining the market executive from embarking on the construction of new shops on top of the existing ones.