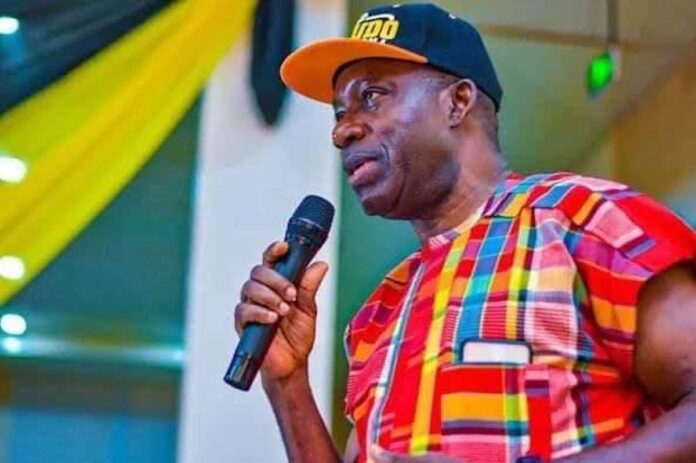 By Chuks Eke
Authorities of Bridgehead Market Traders Association, BHMTA have given a pat on the back of Governor Chukwuma Soludo for returning normalcy in the market and other markets in the state.
Body of Patrons, Board of Trustees, BoT and Stakeholders of BHMTA who made commendation in a press statement, said they were particularly touched by the restoration of rule of law not only at Bridge Head Market Onitsha but in all the markets in Anambra State.
BHMTA stated that worthy of note is the wisdom of the incumbent Commissioner for Commerce and Industry, Dr Obinna Chima Ngonadi not only in resolving all the crisis created by the past commissioners of government ministry in charge of markets in the state, but also in returning the market association to the BoT who are its original owners.
In the statement jointly signed by Chief Sir Okey Ojimba (Chairman), Chief Cyprian Ume (Secretary) and Sir Peter Okala (PRO) for and on behalf of the Body of Patrons, BoT and Stake Holders. Bridge Head Market Traders, they said they were highly impressed that while all interest groups were mounting all kinds of pressures on Ngonadi to rescind his decision to sack the Sunday Obinze-led executive members of BHMTA, Ngonadi went ahead and issued a directive to Obinze to hand over all the properties of the market association to the BoT members who were at that material time in their various shops.
According to the statement, “this is why the body of Patrons, BoT and all Stake Holders welcome with both hands, the subsequent appointment of a young, energetic and qualified Trader, Mr. Chinedu Ezekweike as the incumbent Chairman of Caretaker Committe of BHMTA”.
“This appointment by the Hon Commissioner through the BoT members is a welcome development especially now that our country’s presidential election is near and security situation in the state fragile, adding, our forum congratulate Ezekweike and his team for their emergence and pledged our support not only to our association but to the state government at large”.
“It is the advice of our forum that to whom much is given much is expected. That the core mandate of Mr Governor and Commissioner should be their watch ward in providing services to our co-traders for a livable and prosperous homeland”.
” Our forum further commend Mr Governor in shiploads for his numerous developmental approaches which has been adjudged to be excellent, adding, for once, we have a governor who involves his household in practical ptovisions of employment and empowerment, tackles our security challenges with despatch, encourages indigenous manufacters by practically making it mandatory that we use what we produce in Anambra State and himself as Mr Governor is leading by example”.
In the statement entitled; “
Shiploads of appreciation to the Governor of our dreams who is the implementot, executor and symbol of rule of law, the statement further added: “the history of buying and selling of items and products started with, trade by batter as a means of exchange and transaction, which now metamorphosed into letters of credit, bank draft and e-money transfers”.
“Goods manufacturing and its Importation are all products of developments in commerce which we (Traders) are the ultimate beneficiaries. Market associations have also contributed immensely towards coordinating and managing the very Interest of traders to a reasonable extent but not without its own excesses, gangsterism, corruption and impunity especially when managed by persons of dubious and questionable characters”.
Traders at Bridge Head Market Onitsha being a cosmopolitan and gate way market will easily forget all the pains  inflicted by unhealthy trading environment which is as a result of inefficiency on the part of successive governments who have taken the plight of traders for granted”.
“But on the other hand, traders would never forget the pain, anguish, threat, extortion and man’s Inhumanity to man suffered in the hands of the past regimes of the market who at a stage, coordinated diversion of the Anambra State Government Revenue, IGR”.
“To an extent, the glory of the state which played host and housed the largest market in this West African sub-region, diminished and prospective customers left Anambra State because of the level of extortion they suffer in the hands of the task force and other revenue collectors employed by the past commissioners in collaboration with market leaders”
“The economy of the state started dwindling very fast as her major enablers were declining, the undocumented trade, retailers and local marketers were packing up, things were actually falling apart in this very important aspect of our economic life”.
‘But in a consolation, here comes the solution, hope and encouragement from the governor of our dreams, Prof Chukwuma Soludo (Nwamgbafor) and within barely six months in office, demonstrated that liveable and prosperous homeland is possible in every department of our collective life, his appointment of Dr. Ngonadi and subsequent renaming of the Ministry to Commerce and Industry signal a positive signpost of change, which translated into the the political will to dissolve over 30 markets leadership initially found to be highly flawed, replacing them with competent and qualified traders with a specific instructions of resolving all dispute and bringing back our sense of industry which was the secret of our success as a people, also preparing ground for transparent leadership and general elections”.