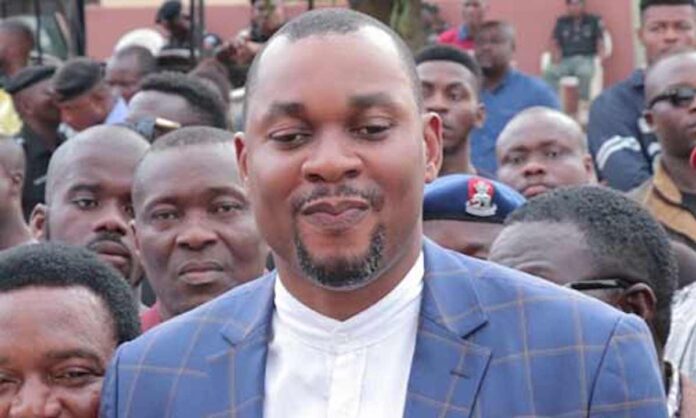 The Anambra State gubernatorial election may have come to a conclusion with the Independent National Electoral Commission [INEC] collating the election results of each local government area [LGA]. Information available to 247ureports.com obtained from sources within the All Progressive Congress [APC] indicates the gubernatorial candidate of the APC, Senator Andy Uba may have engaged in electoral malpractices of which one of the senior associate to Senator Andy Uba and recent decampee from the All Progressive Grand Alliance [APGA] to the APC, Hon. Ifeanyi Ibezim formerly representing Idemmili North and South LGAs in the house of representatives – was arrested by the Nigerian security forces at his home on election day.

On the evening of election day, Hon Ifeanyi Ibezim – who is considered a strong political force in the Idemmili north and south LGAs was reported to have snatched and/or commandeered a significant number of ballot boxes along with associated sensitive electoral materials to his country home. All the materials from the polling booths meant for one of the communities – Abatete – was cornered and sent to the home of Hon Ifeanyi Ibezim. His home was turned into a private polling booth. Voting materials from other communities were also commandeered and redirected to him home.

At his home, a group assembled by the Honourable member began thumb printing the ballot papers in favour of the Andy Uba led APC. While the thumbing was going on, the law enforcement officers were tipped off of the activities unfolding at the resident of Ifeanyi Ibezim.

His home was immediately surrounded by a joint task force of law enforcement officers. The security forces surrounded the home without the knowledge of the honourable member who was engaged in the thumb printing. Within minutes, the security forces barged into the complex and arrested the lawmaker.

With the arrest of Hon. Ifeanyi Ibezim, the ballot boxes and election materials were recovered and handed over to INEC – who then took appropriate actions to cancel the fake votes. Abatete results were thus cancelled. No elections were recorded for Abatete.

Calls were placed to appropriate authorities on the arrest of the honourable member. Higher authorities beckoned on the security forces to ease up on the lawmaker and release him – to avoid raising unnecessary dust.

247ureports.com reached the State Chairman of the APC, Basil Ejidike for comments whether the APC had sanctioned the activities of the lawmaker. He did not respond. The head of the Andy Uba campaign, Paul Chukwuma also did not respond.