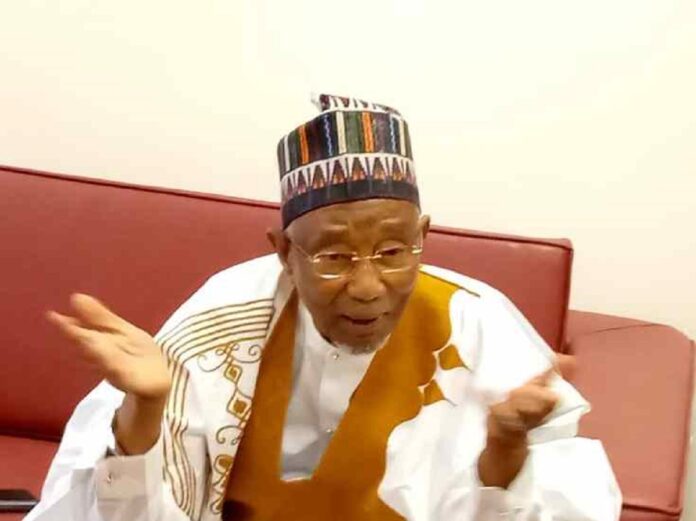 Senator Adamu Bulkachuwa, 81, is the oldest lawmaker in the country.  The octogenarian, who chairs the Senate Committee on Foreign Relations, was recently in the news over his statement on the Indigenous Peoples of Biafra (IPOB). In this interview, he spoke about the quest of the South East geopolitical zone to produce the next president, zoning and other national issues.

Outrage trailed your comments on the activities of the Indigenous People of Biafra (IPOB). What message did you intend to pass to the public?

During my discussion on Channels Television I was asked to comment on what is happening in the South East as regards the activities of the IPOB. I didn’t say anything controversial.

The truth of the matter is that nobody will be forced to remain in Nigeria, but the way to exit is not by killing innocent people. What they should do is to negotiate for their exit. Several countries have done it without killing people or making governance almost impossible. I said if they chose to go the same route of the civil war, of course the Nigerian government will have no choice but to go the same way the war was fought. Most of the people making comments misquoted me. They did not watch the interview. They were just imagining things.

I have been around since independence and have seen the country’s journey to nationhood. So I must tell them the truth.

Do you have any regret?

Why should I regret it? I spoke my mind. After that, some senators also spoke in the same manner in separate interviews.

Some groups were demanding that you should apologise?

Why should I? If you ask those making such statement whether they have watched the interview, they will tell you they only read it online. I will advise them to watch the original video clip. It is available online.

Why do you think this agitation is more pronounced under this administration?

It is not because of this administration, it is because of 2023. They want the presidency to shift to the South East, that is why they are intimidating everybody.

Out of the five South East states, two are now ruled by the All Progressives Congress (APC). As a chieftain of the APC, do you support the idea that the party’s presidential ticket should be zoned to the South East to douse the tension?

What are your reasons?

You don’t dash the presidency on a platter of gold to anyone. Let them produce whoever they think is worthy of becoming president and from whichever party. If Nigerians accept the person, good.

Do you see an Igbo person becoming the president of this country?

They cannot even agree among themselves on who will be presented or who is known enough among them to vie for the presidency. Let’s assume, just for argument’s sake, that everyone in Nigeria agrees that the South East should produce the president, I can tell you that till February, even December 2023, they cannot produce one person. They will not agree. If the person comes from Ebonyi, Anambra people will oppose him and say they have a better person.

In an exclusive interview with Daily Trust, a former Deputy Senate President Ike Ekweremadu (PDP, Enugu) said if the South East produced President Buhari’s successor, secession agitations would disappear.  Do you think in the same direction?

This comes back to what I was saying – intimidating Nigerians to say, ‘look, give them and let’s see what is going to happen.’ Who will take that risk? It is the same thing I am saying. Let them produce the person. If Ekweremadu wants to contest, he should. Let’s see whether he will be accepted under which party.

Which of the geo-political zones do you think should produce President Buhari’s successor?

I don’t care which zone produces the next president. All I want is for Nigeria  to find a good person, irrespective of where the person comes from and under whichever party.

Do you think President Buhari’s visit to Imo State would douse the tension in the South-East?

I don’t think it will. Someone called me from Awka, Anambra State, to confirm my death rumours. He also told me that the streets of Awka were empty because the IPOB issued a directive that no one should come out throughout the president’s visit. It was only in Imo that people were free to go out, and that was possible because there was heavy security presence.

It seems we have two governments – the president of Nigeria and the IPOB, what is your take?

No, the IPOB has influence only on the Igbo because even the reasonable ones among them are scared. That does not mean they have effective control.

Are Igbo leaders doing enough to address the IPOB issue?

They are not. The IPOB leader, Nnamdi Kanu, is incarcerated. But I believe there are some invincible forces within the Igbo land who are fueling this crisis, and probably, even Kanu was acting based on their instructions. But the State Security Service should uncover the brains behind this. Since Kanu is in detention, he does not make statements, yet his organisation is still alive. Who are those behind it?

How do you relate with your governor, who is in the Peoples Democratic Party (PDP) while you are in APC?

I relate very well with him because I believe that as a citizen I have some claims over the administration of any governor that wins election in the state. I am not among the politicians that will see nothing good in what a governor is doing because of party differences. I don’t look for anything from him, but when it comes to services and being fair to the people, I confront him eye to eye on what should be done. In many cases, he heeded to my advice.

How would you rate his performance?

Financially, Bauchi State is in total mess. But I cannot tell you when this mess started. Pensioners don’t get their entitlements. Even salaries of verified workers are not regular. The governor has selected some development projects, but they are truly lopsided. I cannot generalise and say I will give him a pass mark or not because I am not in Bauchi State to know exactly what situation he is in financially, but generally, the state’s financial strength is in trouble. I cannot say why.

The internal wrangling in your party cost it the Bauchi State Government House. What is your party doing to reclaim the state come 2023?

That is a million-dollar question. Many states have developed a formula to zone governorship tickets, and they follow it strictly. In Bauchi, we don’t have such. Bauchi, right now, is an APC state at every level, except the governorship. In the Senate, all the three senators are APC members. In the House of Representatives, out of the 12 members from Bauchi, APC has seven; Peoples Redemption Party (PRP), 2 and the PDP, three. In the state assembly with 31 members, the APC has 20 or 19. We have the majority all over. But the truth of the matter is that the immediate former governor was literally the architect of his own problem. But 2023 is for anybody.

At 81, what is your next ambition?

I don’t have any ambition at all. I have been participating in the politics of Nigeria from my secondary school days. I presided over the 1959 election in a remote village in Bauchi. I presided over another in the 1960s in my own place. I have been part of this system. I saw that my people still have not learnt their lessons. They still don’t know their rights. They elect people who don’t provide good representation. I have actually quit politics literally because I was appointed a district head with a whole community to look after. But because our people are always left behind, I returned to politics to let our people know that you have a right, and expectation from those who elected you. Among all the senators, I am the only one that won election with the least money.

Some young people in the state think they can survive on politicians. They don’t want to work or have a profession, but flock around politicians. I don’t like that. I discourage it and refuse to go along with them. They tried to blackmail me, but I dealt with them all.

If the people, my constituents, have learned some lessons they should present another set of people who can provide quality representation. If they don’t, we will kick them out.

But they see you as an Abuja senator, saying you don’t go to Bauchi. What would you say to that?

How do you feel as the oldest serving lawmaker in the country?

I feel great. However, there are several lawmakers younger than me but looking older. Some are in their 70s but I look younger than them. The secret is divine.

How do you feel when some people spread rumours that you are dead when you are indeed alive?

It was fascinating that people spread rumours that I was dead. When the fake news went around, thousands of people called me on phone and sent messages to confirm the rumour. When the calls came in, the callers would say they called to check on me and I would laugh and tell them that they wanted to confirm whether I was dead or alive. Then a resounding laughter from both ends would follow.

I am alive, thanks to the Almighty Allah, but I have been killed and buried by bloggers and social media influencers.