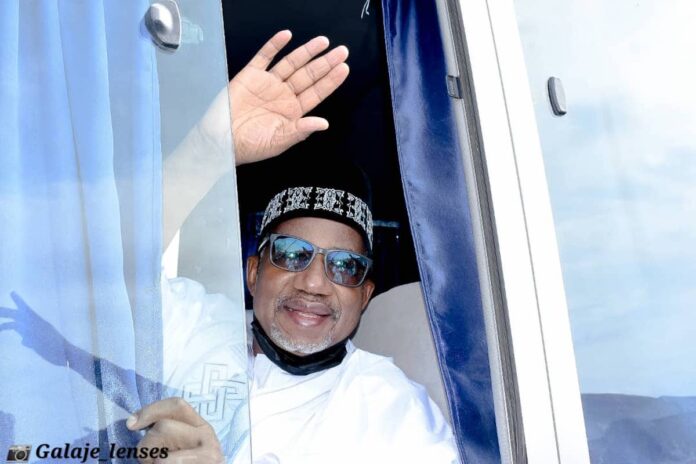 My last week’s opinion on why the executive governor of Bauchi State, Senator Bala Mohammed fits the Presidential cap, was greeted with barrage of questions, diversed perception and, on the other hand, fully loaded criticisms. In a Fifteen paragraphed piece, i opined that Nigeria at this critical time, when slide to anarchy is almost inevitable, and as the country is near to tear apart, needs only a detribalised leader to stabilize it and Bala Mohammed is one, having all is takes to rule the country.

Though, some people are of the view that it’s too early for the governor to contest for president in 2023 but, should rather stay home and complete his transformation agenda in the state. Among the population questions some people ask is, does he have the wherewithal to clinch the ticket, looking at the formidable and awe-inspiring candidates in waiting, who have been desperate for long? They are referring to the likes of Atikulated who is ever ready to “dollarise” the race. This question interests me the most!

Let’s take a memory tour into his political annals. Bala Mohammed is the luckiest politician I know who has never lost election. In 2007 when he first contested for the Senatorial seat, the then ordinary Bala Abdukadir, a retired civil servant from a humbled background defeated a powerfully seating governor by a landslide. Perhaps the only weapon that put Senator Bala on positive side was the population “Kamashi Kaura slogan”. His stay in the Senate short-lived when he was made minister, perhaps he could have made it to the Senate president.

Just like it happened in 2007, in 2019, despite the persecutions, prosecutions and being surrounded by political gladiators, Bala Mohammed defied all odds to take the incumbent governor Abdullahi Abubakar off the seat, in his first tenure. This is unprecedented in the history of Bauchi state. Until it became obvious, if you told anyone that Kaura could defeat MA, he would scoff at you.

Politics is a game of number; if one is accepted by his people the way to promised land is assured. Governor has a sense of humour and he has since established a strong bond of friendship in home and away. This made him to be like a magnet, attracting support from all regions and across the political spectrum in the country. In the same vien, the level of endorsements from various pressure groups governor Bala Mohammed enjoys these days, is posing great threat to other presidential aspirants in the country. The support has continued to increased by the day, so much so that, some groups threatened to sue the governor if he dare rejects their call for him to join the 2023 presidential race.

Forget about Bauchi state and the North East as a whole, even governor Zulum of Borno, who is another beacon of hope, has signaled his endorsement for Bala Mohammed and so, we collectively endorse him (Bala). On June 27th, Daily Trust reported that “Kano residents woke up on Sun with Presidential campaign posters of Senator Bala, pasted around major places within the state metropolis. The posters sponsored by Nigeria Patriotic Youths For Bala Mohammed 2023 has the inscriptions: “To move Nigeria forward 2023”.

Similarly, The Nation reported that “Youth leaders in 42 groups have endorsed Senator Bala to run for President in 2023. National Chairman of NYLF Comrade Elliot Afiyo, said Mohammed was picked after a delegation of the youths took a vote among 145 delegates selected from the 19 states in the North. He said the governor polled 116 votes to edge out media mogul and businessman Dr. Raymond Dokpesi, who got 23 votes. On how they arrived as the choice of those put up, Afiyo said it shortlisted out of over 100 people”.

Moreover, Taraba state is not left out; on June 11th, Vanguard Newspaper reported that “a support group of the governor Bala Mohammed has commenced mobilization of stakeholders of the People’s Democratic Party, PDP, in the state to pressure Governor Mohammed to contest as president in 2023. The group said their resolve to support governor Bala was to chart a new course for the country in the face of the myriad of challenges currently facing the nation.

Beyond the Northern part of the country, the “Coalition of Civil Society Organisations for Transparency and Good Governance in the South-South Geopolitical zone equally called on Senator Bala Mohammed, to run for the presidency come 2023. The body which made the call in Port Harcourt, said Bala has all the qualities to lead the country and turn around her fortunes”.

With the support from the four walls of the country, any unbiased Nigerian must humbly submit Bala Mohammed has the wherewithal to emerge president. Above all, he is more qualified than all other presidential hopefuls as he had experience in the legislature, federal executive council and state government.

Maijama’a, Faculty of Communication, BUk writes and can be reached via sulaimanmaija@gmail.com