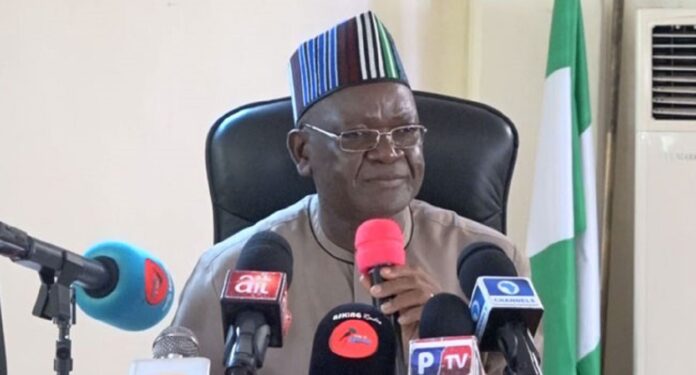 Benue State Governor, Samuel Ortom has inaugurated an eight-member Judicial Panel of Inquiry into Human Rights Violations by the Police, especially the Special Anti-Robbery Squad (SARS) in the State.

Speaking during the ceremony at the Benue Peoples House Makurdi, the Governor said the constitution and swearing-in of the panel followed the resolution of the National Economic Council at its 108th meeting in Abuja recently.

According to him, the resolution was one of the measures taken to address complaints raised by the END SARS Protests across the country, stressing that the protests had challenged all leaders to rise and demonstrate sincerity and commitment in tackling the nation’s challenges.

“The protests have therefore provided us leaders with the opportunity to correct decades of illegalities and injustices meted on the people. It is against this background that we are today carrying out this very important state function of inaugurating the Judicial Panel of Inquiry”, the Governor stated.

The panel’s terms of reference include to receive and investigate complaints of Police brutality, human rights violations or related extra-judicial killings, recommend compensation and other remedial measures where appropriate.

Governor Ortom said the panel which is headed by a retired Chief Judge of the State, Justice Adam Onum, has six months to complete its assignment and urged members to justify the confidence reposed in them by giving all parties the room to come forward and lay their complaints.

He noted that in line with the resolutions of the National Economic Council, Benue State would soon set up the Special Security and Human Rights Committee to monitor activities of the Special or Tactical units to be established by the Nigeria Police Force.

Governor Ortom again, commended Benue Youths for being peaceful all through the protests and urged them not to allow hoodlums to infiltrate them to cause chaos.

Ortom who appealed to parents to plead with their children to continue to be peaceful said, “You are fighting for equity, fairness and justice and you are justified. The Protest has yielded results and you must keep up the tempo. We have had enough economic challenges and we cannot afford to allow it to continue,” Ortom said.

Retired Justice Adam Onum on behalf of other members, thanked the Governor for the trust to carry out the task and pledged commitment and fair hearing to all parties.

Other members of the panel include Mrs. Josephine Haba,

The Judicial  Panel of Inquiry is to conclude its assignment within six months.