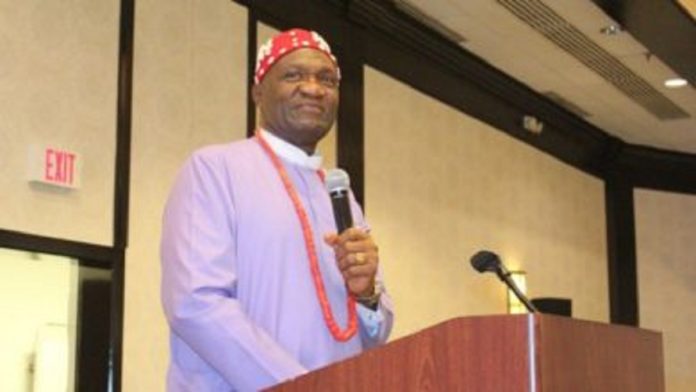 The apex Igbo socio-cultural and political Organization, Ohanaeze Ndigbo, on Tuesday announced its support for the #EndSARS nationwide campaign against police brutality, extrajudicial killings, extortion and bad governance in Nigeria.

The President General of Ndigbo umbrella body, Chief Nnia Nwodo, who made the declaration to support the protests in statement, he personally signed, said the raging youth revolt in the country against the menace of Police brutality as mirrored by Special Armed Robbery Squad, SARS, has its root in the existing political injustice in the country.

Nwodo, noted that the youth rebellion has brought to the fore the fundament security challenges that is imbedded in the erroneous political imbalance in the country.

“The fact that the youth rebellion continues days after the disbanding of the notorious Police outfit”, Nwodo said, “shows that the problem is fundamental and should be intellectualized from that perspective.

“It has shown that the surface scratching by the Inspector General of Police, Mohammed Adamu in dissolving SARS and raising SWAT, goes far away from addressing the deep rooted problems of policing in the country.

“The SARS menace has also thrown a challenge to the country’s elites and government over prolonged neglect of that critical arm of our life as a nation”.

Nwodo who had been championing the campaign through, Ohanaeze Ndigbo, explained that “the only viable and enduring solution to the current situation is to harken to the clarion call of majority of Nigerians to redesign this country in such a way that could address the prevailing injustice.”

“A problem like this is bound to come up when the country continually lived in denial as operating a federal structure while in truth running a confederation in such multi-cultural and divergent nation.

“In addition to the total overhauling of the nation’s security’s architecture, the government should as a matter of urgency initiate the process of restructuring this country as the only way of holistically tackling the basic problems on ground.”

While charged the government to not only protect lives and property of every citizen, Ohanaeze PG, asked the federal government especially, the Minister of Federal Capital Territory to arrange a compensation for such mindless destructions.

Nwodo however, charged the protesting youths to ensure that they carry out their fundamental rights in the most peaceful manner devoid of violence so as to make their message deep rooted and hearkened to.