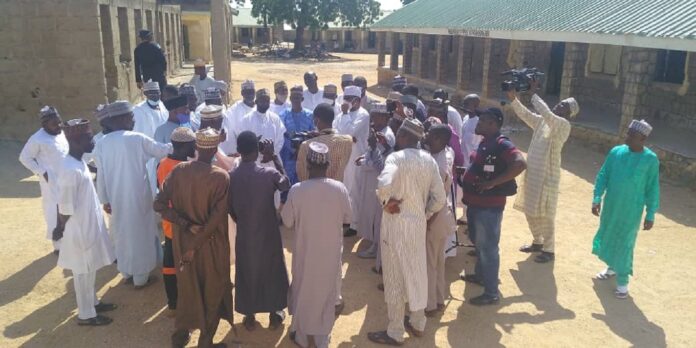 The North East Development Commission NEDC has declared its intention to renovate 72 year old Shekal Primary  and Junior Secondary School Bauchi which is among one of the oldest School established by Europeans since 1948.

Managing Director of the Commission Mohammed Ali Goni disclosed this yesterday in Bauchi after he inspected the classes and premises of the School, He said the commission will built Six brand new classrooms and equipped the classes with furnitures and renovates the dilapidated structures in the school, they will also build boreholes in the School as part of their contribution to the development of education in the State.

Goni said the commission will also takes two project to each local government areas of the state depending on what they needed most in their area.

He said before we embarked on any project is good to come and see what is on the ground and from what we have seen a Hausa Proverb says Gani Ya kori JI, Meaning Seeing is believing, because I heard a lot of stories about the School, now that we see the school we are going to work on it, and we are targeting two projects in each local government area we have 20 local government in Bauchi depending on the needs and wants of the local government that what we will do for each project in the local government

The Chairman of State Universal Basic Education Dr Abubakar Sirimbai Sheikh Dahiru Bauchi thanked the NEDC for their concern and their good intention to renovate the school which will help a lot in addressing the problems of shortage of classrooms, lack of access water , toilets and other problems in the school,

Dr Sirimbai said Government builds additional three classroom blocks when he assumed duty last year and commended the State Governor for doing everything possible to address the problems bedeviled education in Bauchi , “the NEDC came at a time when the government needs intervention from genuine commission and urged them to do more for the State, recently the state Governor Bala Mohammed has approved over eight billion Naira for the renovations and constructions of new blocks of classrooms in the State for 2017 2018 and 2019 SUBEB UBEC projects, apart from many interventions outside the projects”

The Principal of the Junior Secondary School Isma’ila Iliyasu Manga said they have 1475 students, with 56 teachers.

The duo said the  Schools faces the problems of in adequate classrooms, lack of wall that fence the school , lack of adequate furnitures and they need portable water and toilets facilities and urged the authorities to intervene.