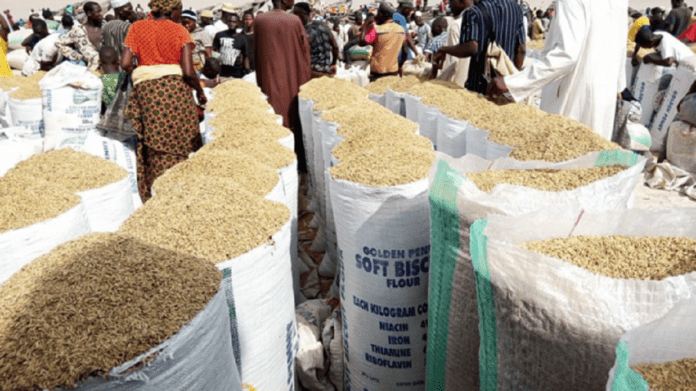 Dr. Gawuna announced that the gesture was in line with the Covid-19 protocol, adding that ” Kano State Government through the Appeals Project programme has conducted technology demonstration in production and processing of Rice and Wheat for various Commodity Interest Groups of both Youth and Women to enhance their productivity.

” In view of the need of aligning project activities of Kano State’s policies and programmes with regards to Women and Youth empowerment, the project has facilitated the training of 1600 Women and Youth as well as 100 persons leaving with disability on various small scale agricultural enterprises ” Gawuna disclosed.

According to the Deputy Governor, the distribution exercise of the farm inputs to the rice farmers in Kura Local Government  Area was part of effort by the Appeal project in Kano towards achieving the intended objectives.

He then restated the commitment of the Ganduje’s administration of supporting local production through  provision of improved production inputs to increase productivity.

While appreciating the effort of the project in Kano State towards enhancing the productivity of farmers in the State, Gawuna tasked the beneficiaries to make good use of the inputs given to them to improve their productivity.

In his address, the Managing Director Kano State Agricultural and Rural Development Authoriry (KNARDA) Alhaji Ibrahim Dan Isile explained that the administration of Dr. Abdullahi Umar Ganduje had since its inception, introduced many Agricultural intervention programmes to boost farmers’ productivity.

” It is quite alarming to note that despite the huge resources used to be committed on this process, farmers are not utilizing the opportunity given to them, which informed their low level of production especially on rice cultivation ” he decried.

Earlier, Kano State Coordinator of the Appeal Project Alhaji Hassan Ibrahim explained that the event was organized to provide Agricultural inputs support to farmers who are targeted for production of 480 tones of rice, describing the move as one of the effort by Kano Government towards enhancing the production of rice in the area.

Others who spoke at the occasion were the District Head of Kura Dokajin Rano Alhaji Abubakar Tijjani Abubakar, Chairmn of Kura Local Government Area Alhaji Mustapha Abdullahi Rabi’u represented by Alhaji Sabitu Lawan and the State Chairman of the All Farmers Association Of Nigeria Alhaji Zubairu Ibrahim.