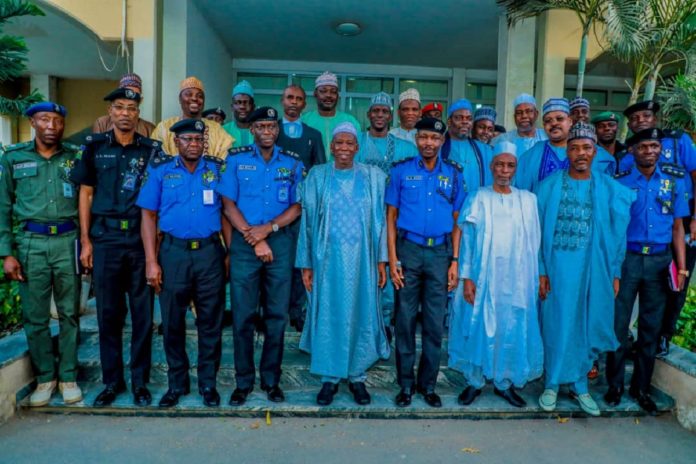 – AIG Zone One Decorates Ganduje With Plaque of Performance

Satisfied with the effective and workable synergy between the security agencies on one hand and the state government, on the other hand, governor Abdullahi Umar Ganduje of Kano state, discloses that, the state does not need any separate security outfit, apart from the regular ones recognise by Law.

He made this known when the newly posted Assistant Inspector General of Police, Zone One, AIG Sadiq Abubakar Bello paid him a courtesy call to officially present himself to the governor, at the Council Chamber, Government House, Kano, along with other senior Police officers, including the Commissioner of Police, Kano Command, CP Habu Sani, Wednesday.

“We do not intend to come forth with any security outfit. People who are not trained and who do not even understand how security works. You just cannot give what you like to people in the name of security outfit. Just like that,” he argued

His confidence in the way security agencies conduct their professional role in securing the society and protecting lives and properties in the state, gives him more encouragement to understand that, with harmonious working relationship among all the security agencies, society would be more secured.

Explaining that, there is no rivalry among the security agencies in the state, “They all work together with a common purpose in all fronts. They all involve in the security management of the state. We are always using our Control Centre to look at and fish out black spots,” Ganduje said.

Part of it, according to him was that the state has multi-purpose tracker vehicle and planted Close Circuit Television (CCTV) in so many strategic locations in the state.

“How can you bring forth something and at the end of the day, the same thing becomes security threat to the people and the society? So we don’t want what will turn to become another security challenge,” he asked rhetorically.

“The Hisbah we have in place are working all in synergy with Police. They are being guided by Police and other security agents, as the case may be. We don’t see them as separate security entity. They, like any other individual, help security agents to work very well,” governor said.

Governor Ganduje added that “With the good synergy and good working relationship among all our security agencies, coupled with Allah’s Guidance and Blessing, Kano is now the most peaceful state in the federation. Your coming to me shows that you really mean business in securing your area of jurisdiction. That is Kano, Katsina and Jigawa states.”

He assured that all the states under Zone One Police Headquarters, would continue to work together for the peace and security of the Zone, and the country in general.

Revealing another strategy for securing the state, the governor disclosed that, “We are coming up with structure  in our new security strategy that will go a long way in complying with the global best practice.”

“It is absolutely necessary to understand that we always need local intelligence gathering among our people. We shall have surveillance in all our markets and other public places,” he encouraged.

On the Command and Control Centre at the Kano Command of the Police Headquarters, Bompai, he stated that the state is using that for securing the state and even beyond, in a modern way of policing.

Even the expansion and inclusion of the state Emirates, to Five from One, were done to also, among other reasons, to deepen and widen the concept of community policing, “Where our traditional institutions could be more effective and vibrant in putting hands together with the government to have more security,” he concludes.

In his remarks the new AIG Bello, commended governor Ganduje for providing the atmosphere and conducive environment for the security agencies to work effectively and efficiently in the state.

He said “I am ready to work and partner with the government and good people of Kano state. The Command and Control Centre itself is another testimony to the fact that His Excellency means well for the state and the people of the state.”

He promised that they would always try and improve the security of the state and other states under his jurisdiction. And he urged all and sundry to cooperate with security agencies for the overall development of the state in particular and the country in general.

“His Excellency’s effort in repositioning the Constabulary Police is another viable way of strengthening community policing. Which the Governor is up and doing in that,” he stated.