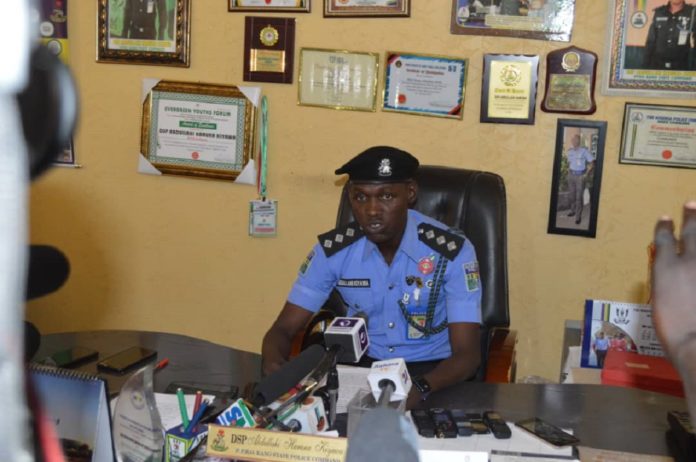 *Forth Estate of the Realm;*

I welcome you to Kano State Police Command Headquarters Bompai to update you on the Command’s Crime Fighting Efforts and some of the achievements recorded in our determination to make Kano State safe and secured. From the last Press Briefing on 23rd December, 2019, i.e. 24 days today, Two Hundred and Eighty-Seven (287) suspects were arrested.

2.  In our sustained efforts to recover more missing children, *the command achieved yet another laudable breakthrough.*

He used the Orphanage home to housed children of both sexes reasonably believed to be illegally obtained. Based on that information, the Command Teams of Operation Puff-Adder were detailed for Intelligence-led operation. The suspect was arrested at about 1600hrs of the same date and *Nineteen (19) children were found under his control.*

Investigation was extended to the Annex Orphanage home located at No. 6 Favor close, Narayi High Cost Kaduna and *Eight (8) more children were found*. The wife of the principal suspect one *Mrs. Mercy Tarfa ‘f’ now at large is in active connivance with her Husband to commit the heinous crime where she participated fully in sourcing the children through unlawful means*. Further investigation into the case reveals that, one *Dr. Chidi Christopher Nwoye ‘m’ also at large, a Medical Doctor with Assumpta Clinic, Nomansland Kano aid and facilitated the procuring of pregnant women, gave them necessary Antenatal Medical care/attention and after given birth, he handover the new babies to the principal suspect,* Prof. Solomon Musa Tarfa. Investigation is in progress.

3. *Three (3) Notorious Kidnapping /Armed Robbery suspects led by their Gang Leader, Murtala Sani ‘m’ that terrorizes parts of Kano, Kaduna and Katsina States were trailed with Technical Support and arrested, where One (1) AK47 Rifle, Two (2) Magazines and Fifty-Six (56) Rounds of 7.62mm Ammunitions were recovered.* All suspects confessed to the offences. Investigation is in Progress.

4. *A Syndicate of Five (5) Suspected Armed Robbers was busted.* Suspects were trailed and arrested after a Complaint of an Armed Robbery was lodged by one Alhaji Yusuf Hassan ‘m’ of Ta’udu Village, Rano LGA Kano. Suspects were arrested at different locations within the State. *Suspects confessed to have entered the House of the complainant, injured him and robbed him the sum of Two Million and Fifty Thousand Naira (N2,050,000.00)*. They confessed to the crime and also *confessed to have robbed a Chinese Nationalist last year, 2019 at Rano LGA and made away with undisclosed amount of money and the Chinese Personnel Firearms*. *One (1) Pump Action Rifle with One (1) Round of Live Cartridge was recovered from them.* Case under investigation.

5. *Six (6) Suspects were arrested for Criminal Conspiracy and Armed Robbery*. Four suspects were arrested at Sabon Gari Quarters Kano and the remaining Two were trailed and arrested at Adamawa State. *Suspects were arrested after they attacked one Bashir Umar ‘m’ of Jos, Plateau State along Tudun Wada Jos Road where they snatched away with his Sharon Motor Vehicle, white in colour with Reg, No. QAP 223 carrying some valuable goods.* Eleven (11) Bags of the goods were recovered from them. Investigation is in progress.

6. *One suspect named Hafsat Jibrin ‘f’ 22 years old of Hotoro Quarters Kano was arrested after Kidnapping a five-year-old Aisha Sunusi at Farawa Quarters Kano where she demanded a Ransom of Six Hundred Thousand Naira (N600,000.00).* Suspect was arrested while trying to collect the ransom and the Victim was rescued safely. Investigation is in progress.

7. *One Child Trafficking suspect named Zainab Adam ‘f’ 25 years old of Hotoro Quarters Kano was arrested in possession of One Month old child where she was looking for a buyer. Investigation is in progress*.

8. *Two suspects were arrested along Ring Road, Hotoro Quarters Kano with one Truck Motor Vehicle with Reg. No. MGA 670 XA loaded with 600 Bags of Sesame seeds valued 17 Million Naira.* The driver confessed that his accomplice Usman Shehu ‘m’ of Shagari Quarters Kano specialized in diversion of goods and the said Usman Shehu confessed that they bought 3 packets of Exotic Drinks intending to adulterate and drug the escort of the goods one Abdullahi Datti attached to OLAM NIG. LTD located at Hadejia Road Kano. Investigation is in progress.

10. One suspect by name Rabiu Haruna was arrested along Yankaba Quarters Kano closed to Rima Foam Company with Five (5) Drums of Suck and Die valued Seven Hundred and Fifty Thousand Naira (N750,000.00) and also Seven (7) Empty Jerri cans of 25 Litres each was recovered from him.

After the arrest of one Bilyaminu Mohammed ‘m’ of Sokoto State, a notorious car snatcher, investigations led to the arrested of Ten (10) of his syndicate members and Seven Motor Vehicles were recovered from them.

11. *One Hundred and Eighty-Four (184) Thugs (‘Yan-Daba) and Phone Theft suspects were arrested after Intelligence-led raids were conducted before, during and after the just concluded New Year and Christmas Celebrations and preparation for the Re-run/bye Elections in Nine (9) Local Government Areas within the State. All suspects were charged to court for prosecution*.

12. *The Summary of the achievements recorded are synopsized below;*

*One (1) English Pump Action Rifle with One (1) Round of Live Cartridge recovered.*

*37 Mobile Handsets and 100 pieces of Memory Cards were recovered.*

*Ninety (90) Parcels of Dried Leaves suspected to be Indian Hemp were recovered.*

*Forty-Seven and a Half (47.5) Cartons of Exol Tablets were recovered.*

*Eight (8) Drums of Suck and Die were recovered.*

*As part of our Inter-Agency Cooperation in Fighting Crimes, all recovered Illicit Drugs will be handed over to National Drug Law Enforcement Agency (NDLEA) and the rescued abducted children will be handed over to Ministry of Women and Social Development. All the Suspects that were arrested and paraded in the last Press Briefing were charged to court*. All the suspects arrested now will be charged to court after investigation is completed as well.

*We appreciate the good people of Kano State and law abiding members of the public for their prayers, support and cooperation.*

*Thank You and God Bless.*