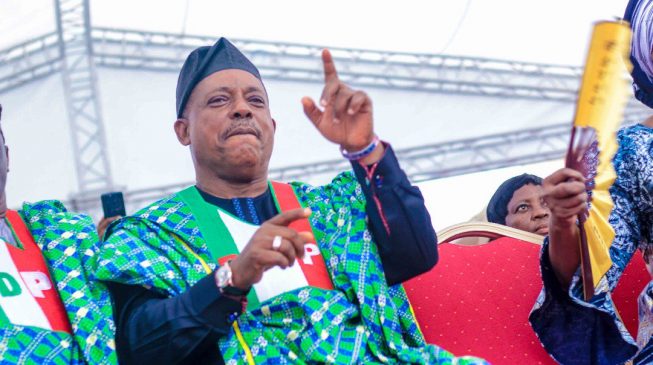 The national leadership of the Peoples Democratic Party (PDP) has
charged leaders at all levels to always remember that power is transient
and as such, guide their actions towards the people accordingly.

The PDP National Chairman, Prince Uche Secondus, who stated this on
Tuesday when the party’s leadership paid a condolence visit to Governor
Ahmadu Fintiri of Adamawa state, urged those entrusted with public
office to emulate Governor Fintiri’s stewardship in delivering good
governance and development to the people of Adamawa state.

Prince Secondus, who led a delegation of PDP leaders to condole Governor
Fintiri over the death of his father, said the governor’s sense of duty
and coordination, as well as his efforts towards ensuring peaceful
coexistence in the state demonstrate the values he received from his
father.

According to Secondus, “you represent peace which the air around Adamawa
has shown.

“Your wish was to see your father live longer and see your achievements
in office but God has called him to come to a place of peace. There is a
time for everything. Those in government should know that their tenure
will come to an end one day.

“You were elected on the basis of your performance while in office. This
is a demonstration of the legacies you got from your father.

“The steps taken so far, including appointments, show that you are a man
of fate who live by your words.

“We pray that God’s wisdom will continue to direct you in your
determination to render service to your people and our nation at large”.

In his response, Governor Fintiri assured that he will leave no stone
unturned in repositioning the state for greater productivity for the
benefit of the people, in line with the manifesto of the PDP.

According to him,  “PDP has come back as the dominant political party in
the state”, and his administration is  determined to carry out its
responsibilities diligently.

Governor Fintiri prayed for a better and stronger party as well as the
consolidation of the successes of the 2019 elections.